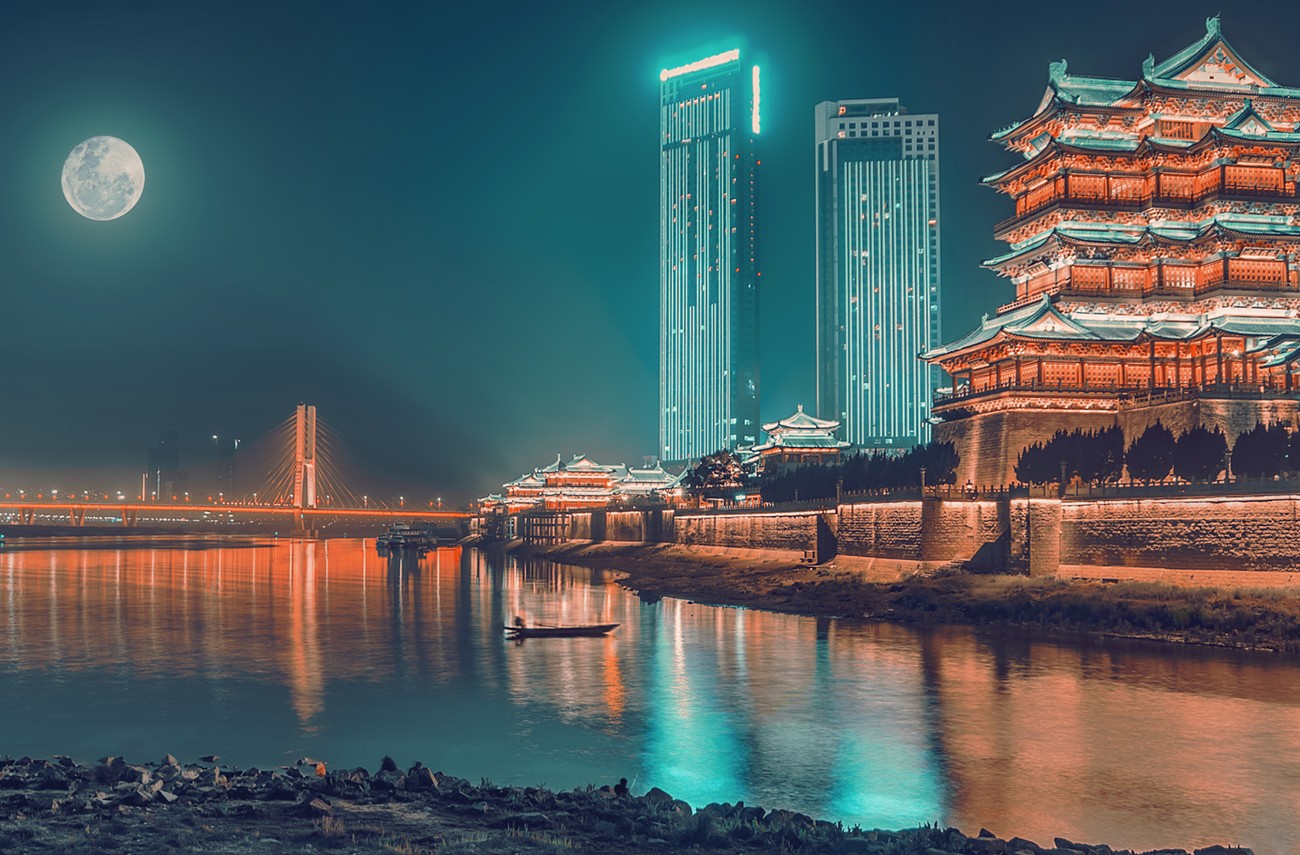 The Mid-autumn Festival ,Pavilion of Prince Teng and the brige across to Yangtze River under the moon at night - stock photo Xiansheng Dai

Are we already in World War III? In many ways, it seems so. There is a hot war between Ukraine and Russia that's only worsening and demanding more and more from the West. Sweden and Finland are joining NATO. Scotland is now planning to break with the UK and join the EU and NATO. Russian is certainly alarmed by these developments and is threatening to take "retaliatory steps."

At this point, those who believe the conflict can be contained in Ukraine appear to be dreaming or are completely ignorant of history, whose pages are not blank but filled with wars that have spiraled out of control as they sucked in more money, more materials, more lives. World War I was only supposed to last a few months. The war in Ukraine will soon be six months deep and has no end or endgame in sight.

What's likely is that the near future will see Russian's recent invasion of Ukraine in much the same way we see Germany's invasion of Poland on September 1, 1939.  There's another reason to call our moment the beginning of World War III. Russia's invasion occurred at a time when the US and China are in a very volatile transition; the former is losing its position as the center of capitalist accumulation to the latter. Nothing can stop this transfer of global power. Indeed, China is already the world's largest market when it comes to what its currency, the yuan, can buy in that market—defined as Purchasing Power Parity (PPP). In terms of gross national product (GDP), China became the second largest economy in 2011, when it passed Japan. The Japan Center of Economic Project now predicts that China's GDP will surpass the US in a little over a decade.

Now, there's nothing in what is called historical capitalism (more about this in a moment) that should lead us to believe that the fall of the US—which ruled the 20th century—and the rise of China will be peaceful. Most likely it will result in a war that permanently scorches the skies and destroys millions upon millions of lives. This understanding, the coming catastrophic clash between the dollar and the yuan, is at the core of the novels by Chinese science fiction writer Cixin Liu.

Cixin is known in the US for his trilogy called, informally, The Three-Body Problem, and, formally, Remembrance of the World Past. The novels were written between 2006 and 2010, and entered English in 2014. The first book in the series won the Hugo Award for Best Novel in 2015. It concerns an alliance that forms between humans who, for one bitter reason or another, have reached the conclusion that the best thing for life on Earth is the extinction of humans, and aliens who want to exterminate humans and make Earth their new home. The plot begins with China's Cultural Revolution.

Y'all, these books are incredible. I'm glad I finally bought the sequels after reading The Three-Body Problem last year. This story is mind-blowing and puts me to shame for not reading more sci-fi.

But the real substance of the trilogy is found in The Dark Forest, which contains two important and telling events in the chapter "Year 205, Crisis Era." One describes a space battle between humans and the aliens, known as Trisolarans. The battle, which is very short but spectacular, happens not far from Jupiter. Indeed, the humans do not really fight the aliens (they are still in transit) but one of their intelligent missiles—which is shaped like a teardrop and made of a material unknown to humans—was sent ahead of the Trisolaran's sleeping fleet. As the millions aliens hibernate during their 450-year journey from the nearest star to the sun, humans, lead by Chinese directed and developed technology, are at war with just one of their unbelievably powerful and also enchanting weapons: "[Its] surface [was] so smooth it was a total reflector[...] the Milky Way was reflected on its surface as a smooth pattern of light that gave the mercury droplet a pure beauty."

The second important event in "Year 205, Crisis Era" has Luo Ji, an obscure Chinese professor of sociology, explaining to a police officer, Shi Qiang, his world-saving concept of the universe. All I can say about this concept is that it approximates the one promoted by the 16th century Italian philosopher and mathematician Giordano Bruno: cosmic pluralism. Bruno was burned at the stake on February 17, 1600, by the Church. Lou Ji, the human the Trisolarans most fear, almost met a similar fate in The Dark Forest. His vision of the universe is not at all easy for standard humans to accept, even when faced with an alien invasion. It demands a complete rethinking of the universe and morality.

The point of all this is Cixin, a computer scientist, imagines not only a cosmic sociology but also a cosmic technological race. This is a matter of life or death for a civilization on any planet. It must develop its technology to a point where it can be liberated from its planet and make the whole universe its home. It also needs to develop its technology for war. The universe is, from Cixin's view, a hostile place. Carl Sagan's dream of intelligent life forms meeting and learning from one another is smashed in The Dark Forest.

It's hard not to read in Cixin's concept of the future and China's 21st century ascendancy the humiliation China experienced when, in 1839, it was brought down to its knees by gunboats from an island in Europe that had a fraction of its population and historical or cultural achievements. The United Kingdom not only forced China to buy its drugs, but also took a piece of valuable land and established Hong Kong. This was a catastrophe from which it did not recover until the 1990s—the decades when its economy and will-to-technology exploded.

CNN: #China's Defense Minister Wei Fenghe accused the US of being a "bully" and "hijacking" Asian countries ;"#Taiwan is first and foremost China's Taiwan," China will "not hesitate" to crush any attempt by the self-governed island to "secede." #台灣 https://t.co/tVTQhIxMIc

Before publishing Three-Body Problem in 2006, Cixin wrote, in 2004, a novel called Ball Lightning, that concludes with a war between the US and China. The story is narrated by Chen, an atmospheric scientist who, for a personal reason, studies a meteorological phenomena called ball lightning. It turns out these mysterious bursts of energy are connected with the quantum realm. Cixin spends pages upon pages explaining the macro-micro mechanics of a natural force that turns out to have military potential. Russian scientists tried to understand ball lightning but failed, but China not only figured out how they work but saw them as an ultimate weapon in its arms race with the US. When the war happens, the weapon almost works; almost gives China the edge. But a new weapon the US developed from Chen's research in tornadoes forces China to the edge of defeat. The war is long and dark.

One of Cixin's short stories, "Full-Spectrum Barrage Jamming," first published in 2001 and translated into English in 2020, is about a war between NATO forces and Russia. (Sounds familiar?) Cixin devotes the story to the people of Russia. Today, China is considered closer to Russia than Ukraine, the latter of which has the full support of the Western powers. Much of this politics is built into the sci-fi world of "Full-Spectrum Barrage Jamming." Indeed, the more you read Cixin, the more real his stories of space travel, exploding suns, and invasions from hostile aliens match with our present reality, which is certainly heading to a world-scale war between a dying capitalist power and a youthful one.

Finally, world-systems theorists, such as the late Giovanni Arrighi, point out that in each transition, the declining power resorted to financial accumulation after abandoning material accumulation. In fact, in the 18th century, the United Provinces became a major source of the capital the United Kingdom used to industrialize. And during the closing years of the 19th century, the United Kingdom exported surplus capital to South and North America. The US is now at the end of its financial period (or what the 20th century French historian Fernand Braudel, describes as the autumnal moment), which began in the 1980s with the rise of monetarism and Wall Street's recycling of petrodollars. So far, each period of autumn has ended with a war.

It's hard to believe that the present sequence of historical capitalism will not not be plunged into a war like the one Cixin describes in Ball Lightning. One must read his novels not as science fiction but as a history of the future.

Two Graphic Novels to Tuck Into During the Big Dark