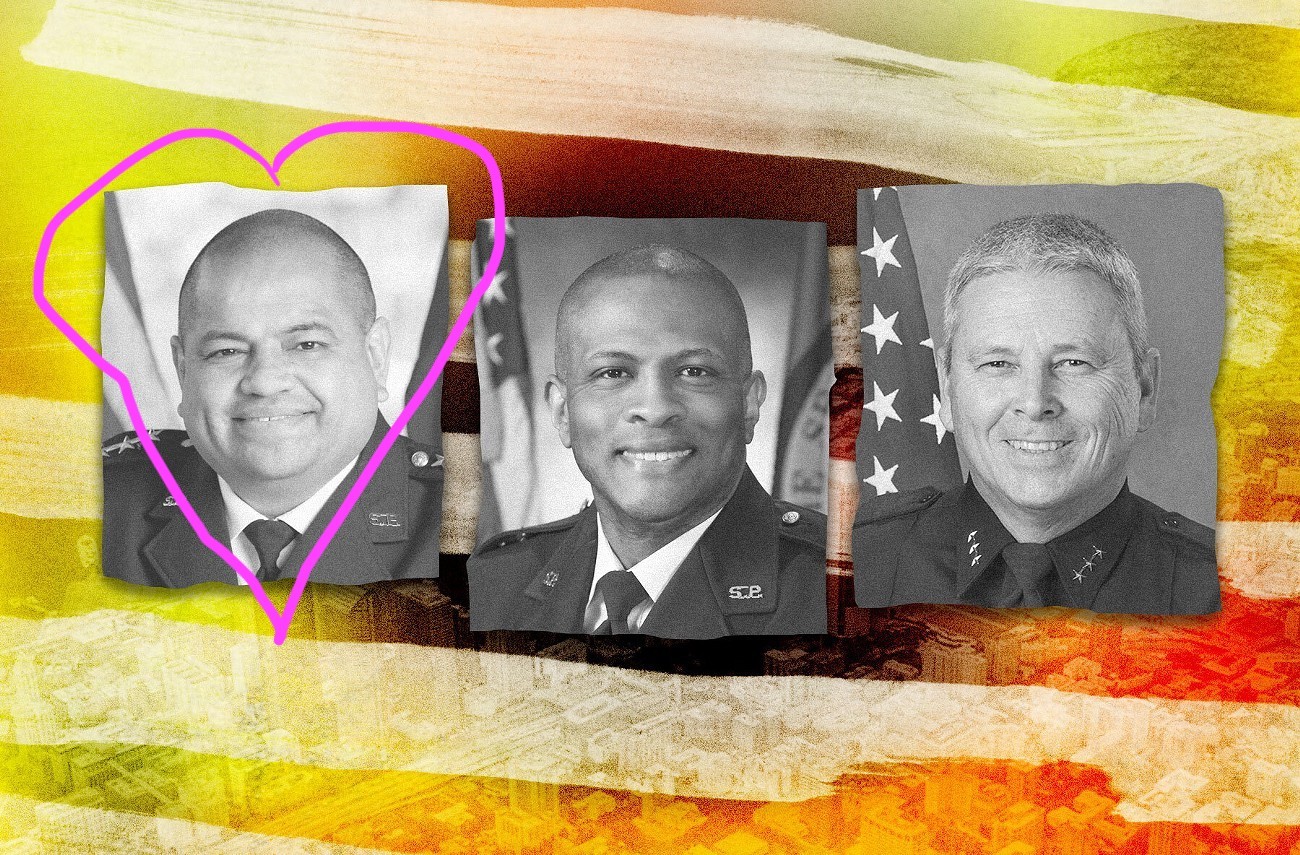 Of these three finalist, Mayor Harrell picked the one he already has. CROUTON

This afternoon, Mayor Bruce Harrell announced his decision to appoint Interim Chief Adrian Diaz for the permanent position at the Seattle Police Department. After a nationwide search that produced a field of two finalists from within the department and one reformer from Tucson, Harrell’s choice reveals that months of “feedback” from the public just so happened to lead him to choose the same guy he told to apply for the job at the start of the search process.

Seattle’s next police chief will start with a to-do list a mile long on top of the daily responsibilities of running SPD: navigating the resolution of the decade-old federal oversight agreement, working with the Council and the Mayor to stand up police alternatives, and finding a way to hire more cops during a national police staffing crisis.

Diaz will face an uphill battle to win over accountability advocates who are displeased with SPD’s history of biased policing. At this afternoon’s press conference, he didn’t help himself in that effort by again referring to the protest movement that gathered in the wake of George Floyd’s murder as “daily riots.”

After a Months-long National Search, We Get the Status Quo

As part of its nationwide search, the Mayor’s Office fielded more than 1,300 responses to a survey asking the public for input on the next top cop and organized seven public meetings for various Seattle communities to express their priorities for the role.

Throughout those meetings and in the Mayor’s summary of the survey responses, people repeatedly expressed a desire for a chief who could lead culture change in a department with a history of racial bias and disproportionate use of force against people of color.

Since Diaz has spent his entire career at SPD, and since he’s run the department for the last two years, framing himself as the culture-change guy presented a challenge, but he did it anyway. He touted a 48% reduction in use of force since 2015, and he pointed to the new Before the Badge training program he implemented this year, which introduces new recruits to leaders from communities with a history of experiencing police violence. In his view, having each of the hundreds of new officers go through the program in the next few years will drive the culture change the public wants to see.

In a rare moment of true #OneSeattle unity, Chief Diaz praised the City Council for funding the Mayor’s police hiring plan for the next three years to attract those hundreds of new officers. When asked what new initiatives he’s working on to further change the department’s culture, he also pointed to a forthcoming program to pair sergeants, captains, and other officers in management at SPD with mentors from the same communities participating in the Before the Badge program.

Diaz hasn’t always been quite so friendly towards the Council’s attempts to better support an overtaxed police department, however.

When the Council pushed for more clarity on whether Diaz believed parking enforcement officers could direct traffic at sports games rather than cops, he gave a vague answer that didn’t hold up to scrutiny. Under his leadership, SPD has also repeatedly missed deadlines for presenting information intended to guide the development of police alternatives that could lighten the department’s heavy workload.

When addressing the department’s less-than-stellar history of policing communities of color, Mayor Bruce Harrell made it clear he didn’t expect Diaz to eradicate racism entirely on his own. The Mayor made the case that restoring public safety to those communities, and to the city as a whole, was the responsibility of everyone in his administration, and that Diaz was “just like the other forty department heads” who he works with on this issue.

Diaz will obviously have a lot more influence on public safety than, say, the head of the City’s human resources department, however. He’s responsible for helping the City convince Judge James Robart, who oversees the consent decree, that SPD doesn’t need the feds watching over their shoulder anymore. Senior Deputy Mayor Monisha Harrell said Diaz has been working on that task since “day one” of the new administration.

Diaz will also need to fill hundreds of vacancies in SPD’s ranks as police departments in major cities across the country report significant challenges in retaining and hiring enough cops. That trend predates the “daily riots” Diaz referenced at today’s press conference, with the International Association of Chiefs of Police calling officer recruitment a “crisis” as far back as September 2019.

Facing those headwinds, Diaz and Mayor Harrell will need to find a way to land on a new contract with the Seattle Police Officers Guild (SPOG) that preserves enough accountability measures to pass the federal judge’s vibe check while also attracting hundreds of new officers. The last SPOG contract prolonged the consent decree by negotiating away too much oversight for Judge Robart’s taste, and the City can’t escape federal oversight without his blessing.

In every opportunity he had to answer a question at today’s press conference, Harrell made clear that he has no doubt Diaz can accomplish all of this after months of a strong working relationship during Diaz’s term as interim chief.