The Company Didn't Look a Day Over 25 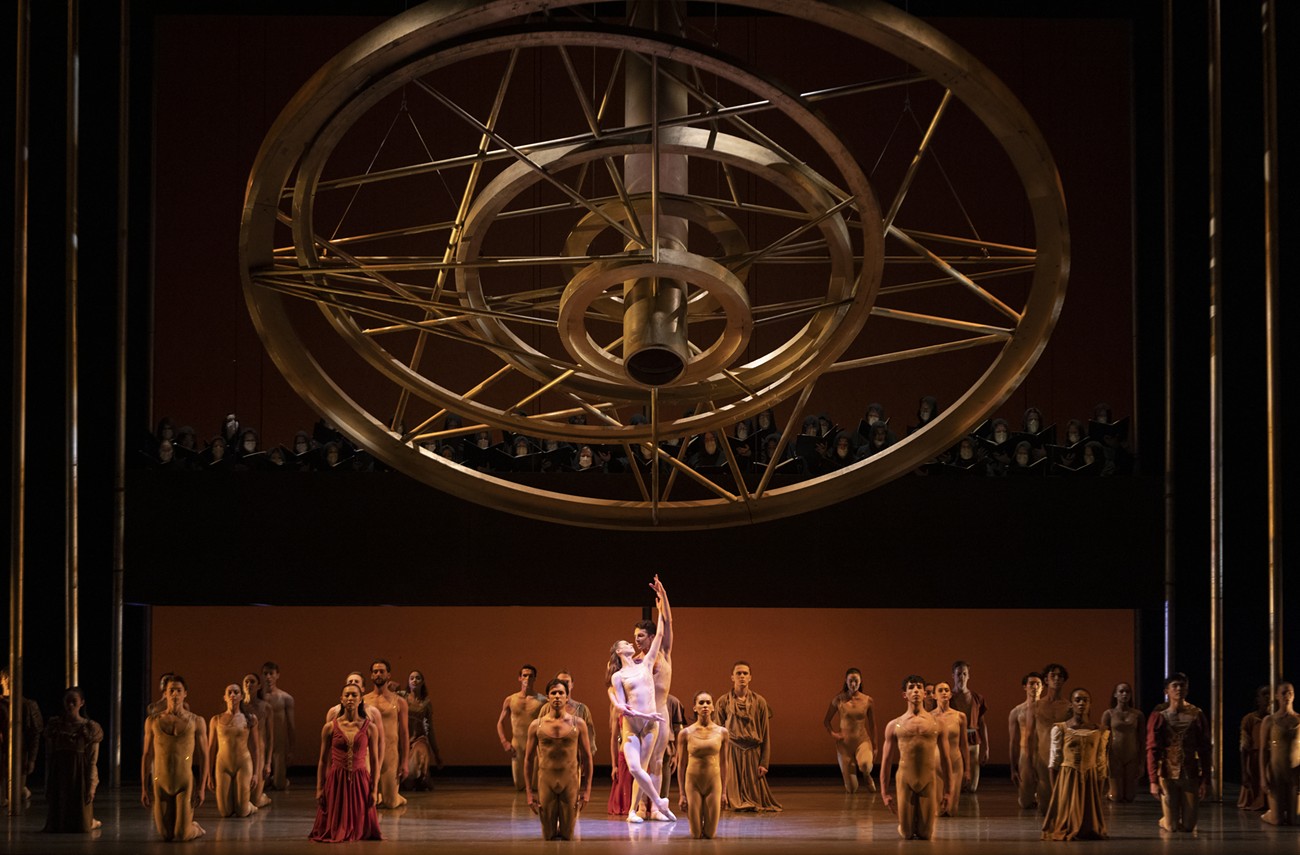 Principals Lucien Postlewaite and Lesley Rausch held down the back half of Kent Stowell's Carmina Burana, which features an epic score and a one-ton golden wheel of fate from late Scenic Designer Ming Cho Lee. Angela Sterling

The program for the Pacific Northwest Ballet's season opener sought to communicate one thing: Yes, we've all struggled with the worst shit imaginable lately, and we will continue to struggle, but it's our 50th birthday, god damn it, and we're big and bold and beautiful and bouncing around with more energy than we've ever had in our lives!!!!!!!! 🥳 🥂

That sentiment found its expression in a spritely rendition of a Modern classic, a mournful and yet exuberant world premiere celebrating the people of Ukraine, and a bawdy epic featuring a one-ton metaphor for fate. Most of the dancers met the energy of the moment, which bodes well for the next few shows, and for the future of the company in the time of COVID.

The evening kicked off with George Balanchine's Allegro Brillante, an ebullient piece with punishing-looking footwork. Piano soloist Christina Siemens kept pace with the score—Tchaikovsky's Third Piano Concerto, which sounds like a 14-minute sprint through an art gallery with only a couple welcome water breaks beside some small French paintings—as the dancers worked to project the lush, romantic tone of the music while also nailing the demanding steps.

I've praised principal dancer Angelica Generosa for her precision in the past, but her performance on Friday night reminded the audience that she's got style to match. Despite the speed of the piece, she found time to playfully linger on a beat here and a beat there, and at one point I think she even added an unscripted shimmy.

In a small gesture that drew a big reaction from my section of the crowd, she snapped her wrists back right as the orchestra struck its final note, adding an elegant and profound sense of finality to the work. I will not pretend to have seen Allegro Brillante a million times—in fact, last weekend's performance marked PNB's first production of the dance since 1984—but after such intense choreography, I'd be surprised if even seven percent of dancers hit that final move the way Generosa hit it. Fucking nutso performance.

Newly promoted principal Jonathan Batista, who supported Generosa throughout the piece and soared through the air with some big, perfectly timed jumps, also turned in an impressive performance. The pair's turns in Swan Lake last season dramatically raised both of their profiles around town, and I hope PNB gives us more from them in the future.

PNB followed its thrilling (though, as with almost all Modernist work, occasionally tedious) opening with a world premiere from Russian-born, Ukraine-raised choreographer, Alexei Ratmansky. His Wartime Elegy honored Ukraine's dead and celebrated the resilience of its people as it adhered to a reliable structure often employed by lyric poets: Begin in the present, pivot to the past, and then return to the present with an image or lesson from the past in tow.

In this case, he started with death and mournful movements, then he jumped back in time with a vibrant and lively section featuring Ukrainian folk music and feats of strength. He concluded with some dancers wearing death garb and others wearing vibrant folk costumes, with some dancers piled on the ground and others standing up, looking forward toward the future.

Artwork from Matvei Vaisberg and music from Valentin Silvestrov underscored both moods. Vaisberg's drawings, which PNB projected on a screen above the stage, centered the human toll of war with sketches of broken bodies. Silvestrov's piano trudged through the mud of sad notes, but you could hear hope in his violins.

Standout performances came from newly promoted principal James Kirby Rogers, who wowed the crowd with a million consecutive spins. A wild bit of choreography in the lively middle section gave Kuu Sakuragi, Luther DeMyer, and Lucien Postlewaite an opportunity to show off their strength as they linked arms to form a sort of perpetual motion machine, relying on each other's weight to fall and then rise up again.

In all, the piece was a fitting tribute to the sacrifices and the fighting spirit of Ratmansky's adopted country. My only gripe: Costume Designer Mortiz Junge's decision to put the men in half-sleeve onesies kinda detracted from the mournful tone. I'm all for putting men or masc-presenting dancers in leotards, but, with the women/femme dancers in long, black, gauze gowns, the costumes for the men (shown above) didn't really fit the mood.

The evening closed with founding PNB Artistic Director Kent Stowell's Carmina Burana, which includes an epic choir singing Carl Orff's "O, Fortuna" and a 2,500-pound wheel dangling perilously over the heads of the dancers. It's big. It's high-energy. It's based on texts from old lecherous monks, so it's bawdy. But it's also a lot of Latin, and the back half starts to drag for me.

That said, veterans Postlewaite and Lesley Rausch danced beautifully in the final duet, principal dancer Elle Macy commanded the tavern scene like a sultry general, and soloists Sarah-Gabrielle Ryan and Ezra Thomson's duets drew audible gasps from me and the two people sitting behind me because they fucking ruled. Cheers all around.

PNB's Roméo et Juliette Is Better Than Ever

Stepping to the Beat of Salsa Con Todo