Leesa Manion, shown here standing in white, is going to need these people on her team to avoid a repeat of last year's Seattle City Attorney election WC

Last night at a fundraiser in South Seattle, a coalition of criminal justice reform advocates came together to support Leesa Manion’s campaign for King County Prosecutor, which she launched earlier this year after 15 years of serving as chief of staff for the office. With her opponent, Federal Way Mayor Jim Ferrell, riding the tailwinds of the national alarm over a crime "wave," recent polling shows Manion will need all the help she can get to overcome the same hardline rhetoric that propelled Republican Ann Davison to victory in last fall's Seattle City Attorney race.

In an August 1 survey, the Northwest Progressive Institute found that basically no one knows either candidate, with 83% of respondents saying they weren't sure who they would pick if the election were held today. The remaining voters split evenly between Manion and Ferrell in the initial ballot, though Manion outperformed Ferrell 41% to 20% among the unsure respondents after hearing basic information about each candidate.

Manion's bio included her commitment to "reducing racial disproportionality" and "strengthening victim services," suggesting a significant appetite among persuadable voters for the kinds of restorative justice programs the attendees of last night's fundraiser want to see from the next King County Prosecutor.

As loyal readers of Slog will remember, Manion came out of the gate as more of a centrist when unabashedly progressive candidate Stephan Thomas was still in the race. But with Thomas long gone from the contest, Manion has embraced a more progressive pitch to win over his former supporters.

During her stump speech last night, Manion focused on the story of her upbringing as the child of a White veteran father and the Korean mother he met during his service. The core of her speech featured a dramatic confrontation: Her White grandmother kicked her Korean mom out of their Kentucky home, but she learned to forgive her grandmother for that trauma. She frames her approach to restorative justice and her support for diversion programs through the lens of that forgiveness, arguing that no one should be judged entirely based on their worst mistake.

For Seattle Port Commissioner Sam Cho, who personally resonated with Manion's story due to his Korean heritage, that kind of lived experience matters in a position that holds so much power over people's lives. He initially supported Stephan Thomas's candidacy, but he said backing Manion after the field narrowed was a "no-brainer."

Summer Stinson, a lobbyist for progressive taxation and other economic justice issues in Olympia, also said her newfound support for Manion stemmed from a personal connection. A "person close to her" recently benefitted from a diversion program, which connects the accused with services instead of jail. Due to his outspoken criticism of such programs, that experience made Stinson even more frightened of a potential Ferrell victory. While Stinson said she would still like to see more progressive reform ideas from Manion, she believes Manion will build on the success of the office's existing diversion programs if given the chance.

Stinson was far from alone in expressing concern for the prospects of a Ferrell victory. In her remarks, King County Democrats Chair Shasti Conrad told the crowd that every local Democratic organization so far had backed Manion in this race, and she reminded everyone that Ferrell remained barred from using the Democrats' voter database. She added that a return to the punitive policies Ferrell prefers would mean "lives lost and a negative impact on our communities."

Not everyone at the event was entirely sold on Manion, however. Amy Madden, a longtime organizer with the 43rd Legislative District Democrats, said she came to the event because she wanted to hear more from Manion about her progressive bona fides. At the end of the day, though, she was firm in her belief that low-income, queer people such as herself "need to be aware of the repercussions of electing someone like Ferrell."

After draining a few jump shots over Senator Joe Nguyen on the host's backyard basketball court, King County Councilmember Girmay Zahilay took his turn dunking on Manion's opponent. Zahilay, who chairs the Council's Law & Justice Committee, scrupulously avoided naming Ferrell during his speech, but he clearly cast him as one of several "disingenuous politicians who are willing to exploit and spread misinformation for their own political gain."

Zahilay traced the County's perceived lack of progress on public safety back to what he called a "crisis of misinformation." As proof of that crisis, he recalled a recent dispute between the County government and the mayors of cities in South King County, including Ferrell, over the operation of the King County Jail.

Ferrell signed onto a letter with several other mayors who have endorsed his campaign, claiming that a refusal to book more people into jail caused a surge in crime in their cities. But, as Zahilay informed the crowd, the jail only refused to accept more bookings on one occasion when they were already so overcrowded that locking up more people would not have been safe. By contrast, Zahilay said he believes Manion will be transparent and truthful with the public about the criminal legal system's limited ability to solve the root causes of crime.

Overall, Manion seems to have won over the progressive holdouts, who began the campaign suspicious of her commitment to data-driven approaches to criminal justice. Now, she'll need their help communicating the stakes of this race to their constituents. With Ferrell matching her dollar for dollar in fundraising in a national media environment committed to perpetuating mass hysteria over a crime "wave" heading into the general election this November, that'll be a tall order. 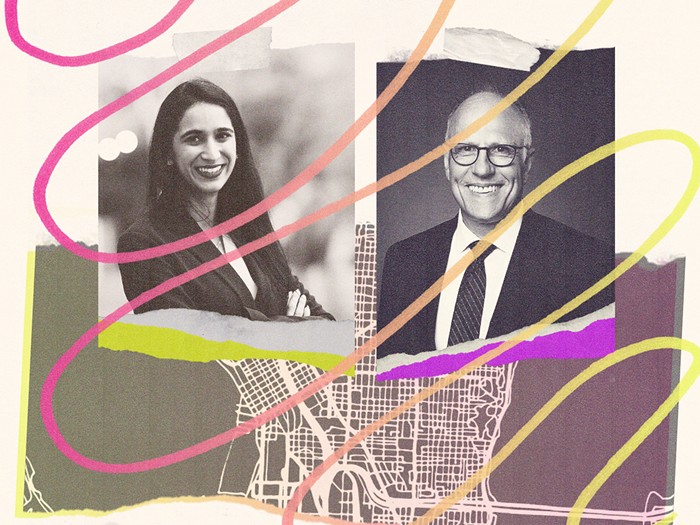