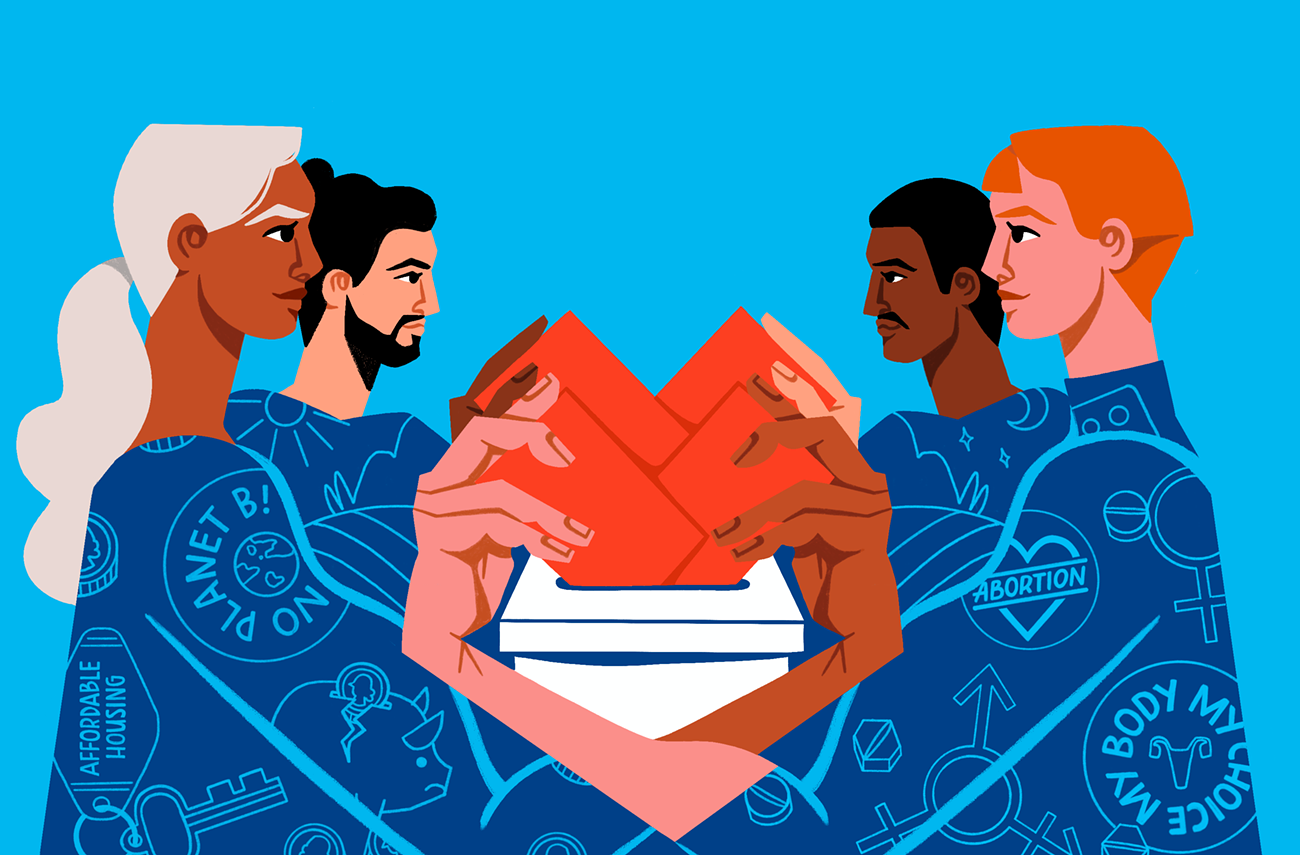 For the moment, it seems as if you all really did vote your hearts out. TERESA GRASSESCHI

Nationally, Republicans still look likely to flip the House, and they could very well take the Senate. We won't know until we see more from Arizona, Nevada, and sweet, sweet Georgia, which looks bound for a December runoff after some MAGA groundhog emerged from his burrow last night and saw his shadow.

But opinion writers, pundits, and some pollsters figured Democrats would be gnashing their teeth, tearing their garments, and blaming the left for a massive red wave crashing across the nation by about now. That's not exactly happening, thanks in part to Washington voters supporting Democrats in the Senate and—fingers all the way crossed—two tossup US House seats. Meanwhile, early statewide, county, and city-level results look downright promising for progressives—especially for criminal justice reformers.

What happened? And what now? Let's discuss.

The biggest winner last night? Us, baby! Not to toot our own horn, but 🥳🥳🥳. All but one of our endorsed candidates came out on top in the initial ballot drop last night.

We take special credit for our underdog picks. Stranger-endorsed, no-name (no offense) candidate Pooja Vaddadi pulled ahead of the Municipal Court Judge incumbent Adam Eisenberg by 13 percentage points. We also picked Darya Farivar, who was the youngest and one of the least-funded candidates for the open seat in north Seattle's 46th Legislative District. She now has a 12-point lead over the Seattle Times-endorsed candidate who raised almost twice as much money. Claudia Kauffman faced off against the Democrats’ hand-picked, cop-friendly candidate in the primary for an open state Senate seat in Kent. We picked Kauffman. Kauffman won. What’s more, even as a tough-on-cops candidate in a purple district, she won against a back-the-blue Republican.

Of course, we can't take ALL the credit here. There’s quite a few other factors that explain why progressives did well in this election. We’ll go into all that in more detail below. But for now, we're gloating. 😜

In more humble analysis, we may better understand the extent of our impact when Seattle's election reform results settle. As of last night, the city's preference for ranked-choice voting is very clear (voters listened to us, The Urbanist, and Kamau on Twitter), but the decision to change the system is neck-and-neck. Conventional wisdom says that late votes trend progressive in Seattle, but perhaps those votes trend Stranger? If we get more “No” votes and more RCV votes throughout the week, then it’ll give some indication of how many later-voting progressives consult our cheat sheet before hitting the ballot box on election day.

Abortion is wildly popular. After a bunch of scum bags with gavels put your uterus at the mercy of state governments, the Democrats ran on abortion. In Washington, Republicans tried to act like the abortion conversation bored voters in a state with pretty solid protections, especially GOP US Senate candidate Tiffany Smiley. A top campaign staffer from the Smiley campaign said that Murray would lose if she didn’t ditch abortion and make a last-minute shift to fearmongering about crime-infested, coffee-barren Capitol Hill. She did no such thing, and she won while leading with a pro-choice platform.

She’s not alone. Rep. Emily Randall over in the 26 LD, which covers much of the Kitsap peninsula, also ran hard on abortion. On election night, she lead by 5% over her Republican opponent. And abortion isn’t just popular here: California, Michigan, and Vermont all codified the right to an abortion in their state constitutions. It’s not just blue states that want to chose, either. Even though pro-lifer Rand Paul easily won back his Senate seat, the voters of Kentucky have so far rejected a measure to amend the state constitution to exclude the right to abortion, following in the footsteps of Kansas voters who rejected a similar amendment in the primary.

Washington voters did their part to preserve democracy (so far). Pat yourselves on the back, Washington. We’ve done our part to avoid (for now) another entirely too-close brush with fascism after Patty Murray, Kim Schrier, and Marie Gluesenkamp Perez all pulled ahead to significant leads on election night.

Murray’s apparent victory will make it just a little harder for the Republicans to take back control of the Senate, which means Biden will continue to have the power to confirm judges if the Democrats can win the remaining Senate races that the Associated Press hasn’t called as of this morning.

While control of the House of Representatives remains uncertain, Washington may end up providing the tipping-point win for Democrats to keep control of that chamber of Congress as well. Despite tight polling throughout the race, incumbent Congresswoman Kim Schrier appears to have held off Matt “Make Crime Illegal Again” Larkin, as the remaining ballots to count in her race will include a hefty portion of the now-blue territory of eastern King County.

Down in southwest Washington, where late-arriving ballots historically shift more red than in the Seattle suburbs, Marie Gluesenkamp Perez might still have a chance of keeping Washington’s version of Marjorie Taylor Greene out of Congress. Perez currently leads election-denier Joe Kent by a little over 11,000 votes. If she holds onto that lead, her victory would send a message that there are enough pro-democracy voters willing to cross party lines to keep conspiracy theorists out of our federal government—at least in Washington state.

And it seems like WA voters cleared many of the most MAGA-headed freaks in the State House. A moderate GOP candidate booted nightmare Rep. Robert Sutherland up in Granite Falls; Rep. Vicki Kraft missed her shot for Congress in southwest WA, so she is out; Rep. Brad Klippert will lose his seat in Olympia after losing his campaign for an eastern Washington Congressional seat and now his write-in campaign for Secretary of State; Rp. Jesse Young is gone if he loses to Randall in Gig Harbor; and Rep. Rob Chase from Spokane Valley looks done given real estate Republican Leonard Christian's lead. At the very least, all of that should make for much less interesting but much more civil floor debates.

Look all over the ballot. Leesa Manion staked her bid for King County Prosecutor on promises to take a data-driven approach to reducing crime, which would essentially mean supporting and expanding diversion programs. Her opponent, Jim Ferrell, spent his campaign talking shit on those programs, all while palling around with Republicans and cops. She's leading him by 11 points in a county that normally shifts progressive as we count more ballots.

But reformers aren't just leading in elected positions within the criminal legal system. Democrats all over the state faced screaming crime mailers, and yet they're leading in places they have no business leading. "The whole Tiffany-Smiley-not-being-able-to-go-to-Starbucks thing doesn’t land with people’s actual experience. Not just on Capitol Hill but up in Bellingham, Oak Harbor, and Gig Harbor," said Democratic State House Rep. Joe Fitzgibbon, who runs the committee responsible for electing more Dems to his chamber. "People care about those things, but they don’t think the GOP is offering any actual solutions." So far, that seems to be right.

Democrats have no more excuses for rejecting progressive policy. Every session in Olympia, Democratic leadership sacrifices good, progressive policies on the altar of preserving the majority. But last night's results strongly suggest that the state's Republicans pose no real electoral threat. As Fitzgibbon told The Stranger over the phone, the state Republican party started this cycle saying they could take the majority in the State House. Right now, results show House Dems picking up three seats, increasing their majority to 60-38.

Sen. Jamie Pedersen, who chairs the committee responsible for electing more Dems to the state Senate, started out the year projecting doom and gloom before cooling off after a strong showing in the primary. But if the results don't shift too red in the coming days, his chamber could pick up a seat, increasing the Dem majority to 29-20.

Over the phone, he argued for optimism. Democratic senators currently lead senate races in Gig Harbor, Whatcom County, and Covington/Kent. The current leads in Gig Harbor and Kent are larger than the number of votes that shifted in those same races in 2018, and the 2018 Dem candidate in Whatcom County gained more votes between election day and the final results. "We’ll have a better sense of [the shift] after a day or two, but I’d sure rather be where we are," Pedersen said.

If Dems do get to 29 senators—and even if they hover around 27 or 28—then fears articulated in backrooms about losing the majority should be laughed down. Over the phone, Pedersen didn't exactly sound ready to hop on his progressive steamroller just yet. Rather, he said that adding another Dem seat to the fold would allow them to "continue pushing forward" on stuff they're already planning.

He's working on a bill to make gun manufacturers liable for the "damage their dangerous products cause," and Dems will also be running a bill to ban sales of assault weapons. "Who knows where we’ll be in terms of the budget, but we're going to be in a pretty strong position to defend the work we’ve done and to go further in terms of climate and carbon reduction. We'll also continue to have a good discussion on progressive taxation ... and it's pretty hard to see a mandate out of these results for a dramatic rollback on the police accountability bills," he said. PRETTY HARD, INDEED.

If these results stay the same, one message reads loud and clear: Seattle supports aggressive policy to finally address the housing affordability crisis. Let's get this done.

Rich Smith is The Stranger's associate editor. He writes about politics, books, and performance. You can read his poems at www.richsmithpoetry.com

Hannah Krieg is a staff writer at The Stranger covering everything that goes down at Seattle City Hall. Importantly, she is a Libra. She is also The Stranger's resident Gen Z writer, with an affinity for Tik Tok to match.