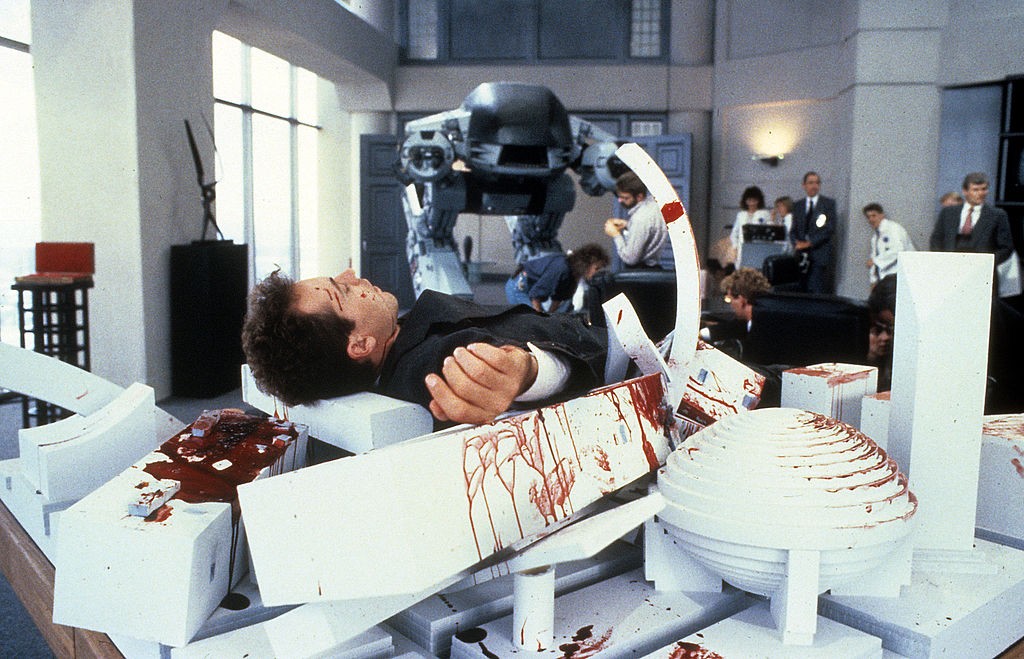 "Somebody want to call a goddamn paramedic?" ED-209 kills Kevin Page in a scene from the film 'RoboCop', 1987. Photo by Orion/Getty Images
Fall Arts 2022

Verhoeven's first sci-fi film is RoboCop; second, Total Recall, and third Starship Troopers. All of these works are remarkable and imposed a leftist futurism that pretty much dissolved in the late 1990s. The Matrix (1999), for example, is a sci-fi film that—despite its rebel forces, its rage against the machines, and its spectacular revolution—is, in essence, apolitical. This fact is made plain when one compares it to RoboCop, a film about a dead human cop who is brought back to life by a corporation, Omni Consumer Products (OCP), which is developing state-of-the-art policing technology. This company wants to sell, and therefore make a profit from, a social need that should be provided for free by the government: Safety.

Set in what the mid-'80s determined to be the near future, RoboCop opens with a Detroit that has lost complete control of violent crime. The Detroit Police Department is overwhelmed and apparently underfunded. Robbers and thieves roam the streets with military-grade weapons. Shops explode, women are raped, and cops are killed on the regular. OCP's lab creates a human machine that's very expensive but gives law enforcement an edge in the fight against crime. But what happens in the end? The corporation turns out to be eviler than the criminals on the street. OCP is run by sociopaths, by men and women who have one goal: make money make more money. For them, rampant crime is nothing more than a market opportunity.

And so, what we see, as the film's story unfolds, are two levels of lawlessness. One is on the surface and happens on the streets; the other is structural and conducted by the boards of corporations. Nothing of this kind is found in The Matrix, or even Gattaca, a film that had politics in its original script but none in its final cut. And the reason for this distinction is found in the economic transition from the 1980s to the 1990s. The latter was still suspicious of the new order called neoliberalism (a society entirely directed by market forces); the former, which was defined by the presidency of Bill Clinton, had surrendered to it. Indeed, the year The Matrix entered theaters, 1999, the New Deal policy that separated commercial banks from investments, the Glass–Steagall Act, was effectively ended by the  Gramm-Leach-Bliley Act. The crash of 2008 has its roots in the demise of the Glass-Steagall Act, which marked the point at which the American economy placed finance at its center.

Total Recall (1990) continues Verhoeven's critique of American capitalism, which, according to the film, has commodified the solar system. Mars now has cities and companies that mine turbinium ore. The film's star, Arnold Schwarzenegger (Douglas Quaid/Carl Hauser), buys a vacation package to Mars; it turns out he is not who he thinks he is and that those extracting wealth from Mars want to eliminate working-class mutant humans, who have organized into a rebel force.

But Verhoeven's most radical film, Starship Troopers, was released the same year (1997) as Gattaca, the first great neoliberal science fiction film. The last one is, of course, Edge of Tomorrow (2014), which is apolitical—meaning, capitalism is neutral and so is American military power. What's evil are just aliens. Starship Trooper is also about war between humans and aliens (or giant insects). It begins (somewhere in the 23rd century) by presenting a whole world that has been colonized by American capitalism, which, as with today, is grounded by its massive industrial-military complex. The scale and size of this Americanized military is at the heart of the film's mystery and the war with the alien bugs.

Starship Troopers flopped big-time because it arrived at the wrong time. If it were released in the 1980s, it would have been a sci-fi blockbuster. Also, it would find considerable success in the present entertainment climate, which has South Korea to thank for re-injecting the suspicion of American militarism (The Host) and the reality of class struggle (Snowpiercer, Space Sweepers) in genre cinema. Verhoeven's sci-films are post-neoliberal; the sci-fi films of today are post-neoliberal.

SIFF Film Talks hosts a Paul Verhoeven series through October 5, with screenings and discussions of six of his films including Total Recall, Showgirls, and Starship Troopers.