Because nothing can muck up a sweet Seattle spring like having your face ripped off by a dog. 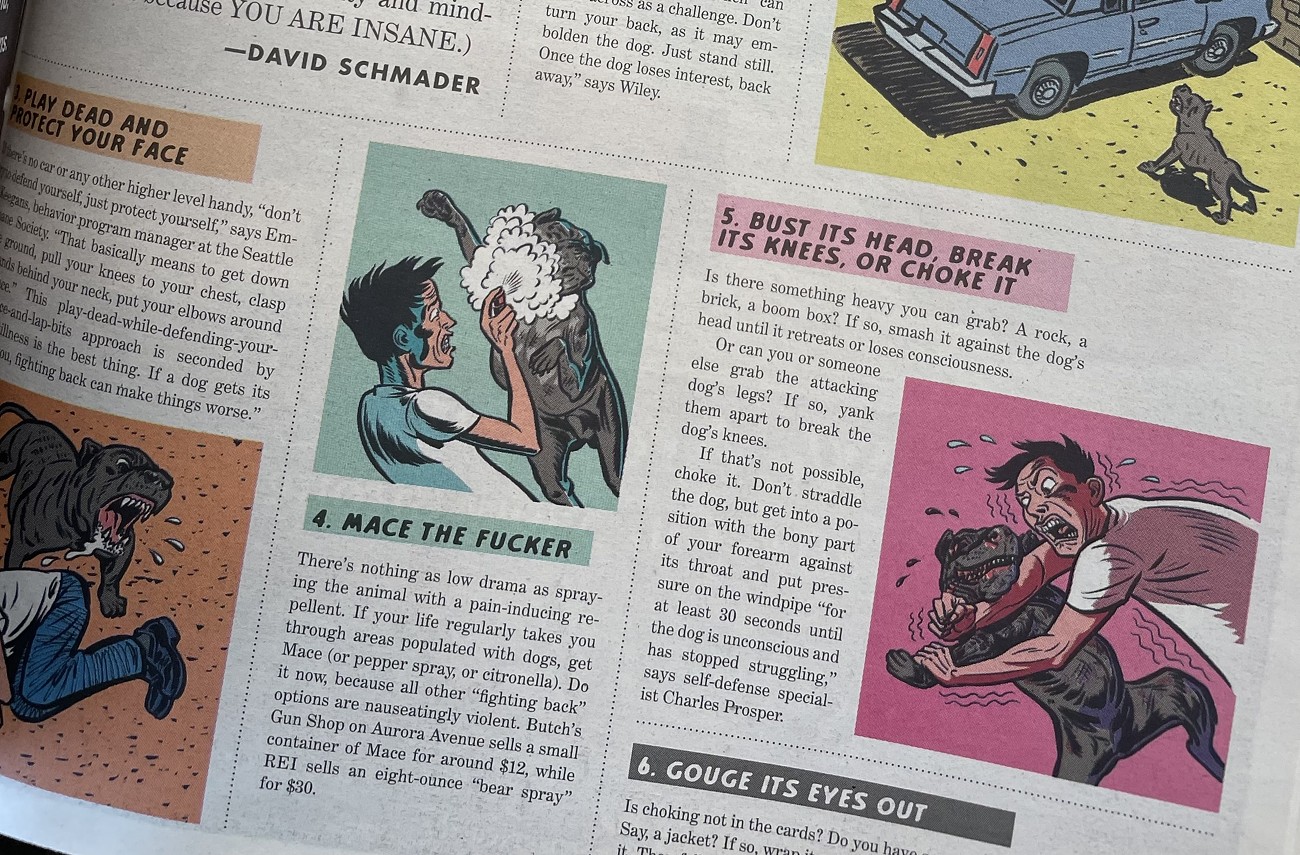 Fact: Any breed of dog is capable of attacking a human. But 56 percent of all fatal dog attacks in the United States in the past five years were committed by pit bulls, according to a report released last week by the organization DogsBite.org. "During the 1980s and 1990s, fatal dog attacks averaged 17 per year. The death-by-dog-bite rate now is nearly double this amount at over 30 per year and largely due to pit bulls," the group says. The tips below can be used against any breed of dog that happens to attack, up to and including the pit bull. (And to those who claim that humans' anxiety about pit bull attacks is fostering an environment where pit bulls are subliminally encouraged to attack: I will not discuss matters of human culpability and mind-reading pit bulls because YOU ARE INSANE.)

"Trying to make friends with strange dogs is not a good idea," says David Wiley, a Seattle dog behavioral therapist with BarkBusters.com. "Don't try to pay attention to a dog in a car or behind a fence—even friendly dogs can be territorial."

If you find yourself on what feels like the verge of being attacked: "Don't run—the movement can make the dog more excited and chase you. Stand completely still and cross your hands in front of you. Don't make direct eye contact, which can come across as a challenge. Don't turn your back, as it may embolden the dog. Just stand still. Once the dog loses interest, back away," says Wiley.

So you've stood still and avoided eye contact, and still the dog in question shows signs of dangerous aggression. If you can get yourself somewhere higher than the ground, do it. If you can stand on a car, stand on a car. (You can worry about possibly denting a stranger's hood and roof later—just get the fuck up there.)

3. Cover Your Face and Play Dead

If there's no car or any other higher level handy, "don't try to defend yourself, just protect yourself," says Emily Keegans, behavior program manager at the Seattle Humane Society. "That basically means to get down on the ground, pull your knees to your chest, clasp your hands behind your neck, put your elbows around your face." This play-dead-while-defending-your- tender-face-and-lap-bits approach is seconded by Wiley: "Stillness is the best thing. If a dog gets its teeth into you, fighting back can make things worse."

There's nothing as low drama as spraying the animal with a pain-inducing repellent. If your life regularly takes you through areas populated with dogs, get Mace (or pepper spray, or citronella). Do it now, because all other "fighting back" options are nauseatingly violent. Butch's Gun Shop on Aurora Avenue sells a small container of Mace for around $12, while REI sells an eight-ounce "bear spray" for $30.

5. Bust Its Head, Break Its Knees, Or Choke It

Is there something heavy you can grab? A rock, a brick, a boom box? If so, smash it against the dog's head until it retreats or loses consciousness.

Or can you or someone else grab the attacking dog's legs? If so, yank them apart to break the dog's knees.

If that's not possible, choke it. Don't straddle the dog, but get into a position with the bony part of your forearm against its throat and put pressure on the windpipe "for at least 30 seconds until the dog is unconscious and has stopped struggling," says self-defense specialist Charles Prosper.

6. Gouge Its Eyes Out

Is choking not in the cards? Do you have something to wrap around your arm? Say, a jacket? If so, wrap it around your nondominant arm and let the dog bite it. Then fall on top of the fucker and dig your fingers into its eyes. Don't stop until the dog's a whimpering mass of blindness, then get yourself to safety.

Comments 479
Tags: Features
The Stranger depends on your continuing support to provide articles like this one. In return, we pledge our ongoing commitment to truthful, progressive journalism and serving our community. So if you’re able, please consider a small recurring contribution. Thank you—you are appreciated!
CONTRIBUTE NOW