My Name Is Dave, I Collect Vinyl Records, and I Have a Problem

My record collection and I got priced out of my apartment. 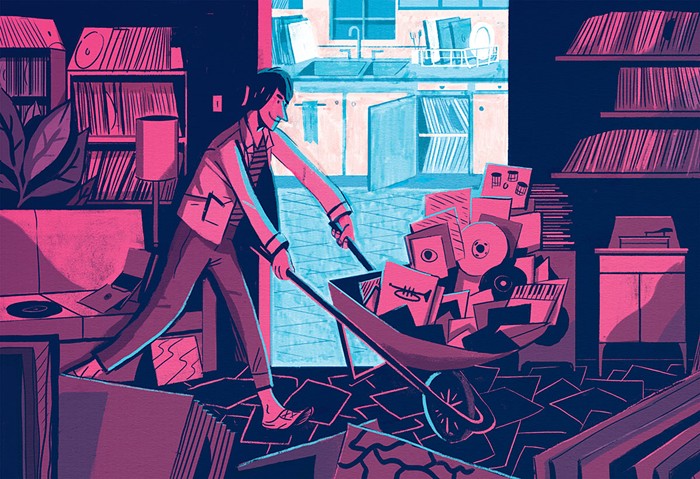 I recently had to move to a smaller apartment because of our great city's rising rents. Maybe you can relate. This has forced me to face the unpleasant physical reality of my music collection, which consists of six or seven thousand records, CDs, and cassettes (conservative estimate). Oh yeah, and dozens of music-oriented DVDs.

Cramming all of these artifacts—plus books, magazines, and non-music DVDs (because I'm a well-rounded individual)—into my new Beacon Hill apartment has required many ruthless decisions about what to keep and what to jettison. I'm not done making these decisions.

There is a method to my record-evacuating madness, which is why progress has been so slow. I open a box, grab a handful of records, and fan them out like playing cards as I make split-second decisions about whether to retain them, put them into the limbo of "to be determined after one more listen," or sell them.

In order for me to keep a record, it needs to fulfill one or more of these functions: Can I use it as a mechanism to escape reality's chronic shitshow? Can it facilitate wallowing in bittersweet nostalgia? Can I play it in a DJ set? Most importantly, can it fool me into thinking a benevolent god exists? Repeat until exhaustion sets in.

Just to get all these thousands of plastic circles into my apartment (plus furniture, etc.), I hired two professional movers. When the epic struggle ended 7.5 hours later, I asked if mine was their worst work experience. The poor chaps paused and said, "No... but it was the longest." At least I tip well. (Note: I am a mere amateur hoarder compared to Stranger receptionist Mike Nipper in terms of vinyl accumulation. But he lives in a Bellevue mansion, so space is no issue for him.)

When, two days after the move, the technician from Wave arrived to hook up my internet, he encountered an imposing wall of boxes stacked six feet high. It blocked his path to the outlet. I had to shift about 400 pounds vinyl to clear the way. He looked on with pity as I grunted in skinny-armed effortfulness. As he did his job, we talked about my absurd music collection and then—of course—he handed me a business card with his band's info on it. I have yet to look them up, because I have enough problems at the moment.

My most pressing concern in life—after meeting deadlines for The Stranger—has become: Where the fuck am I going to put all these records, CDs, and cassettes? Most people see kitchen cupboards as places to store food and the tools of its preparation. I, on the other hand, view them as valuable real estate in which to stash recorded music. Hell, I don't even use my stove—why not shove a couple hundred compact discs in there?

Yes, I realize I'm going to die alone, and the authorities will find my decomposed body 10 days later, as my turntable spins with the stylus in the run-off groove of a Yusef Lateef LP. I've come to terms with this.

What led to this crisis? In a roundabout way, I blame my brother for getting me addicted to vinyl. He initiated our weekly jaunts to record stores in the metro Detroit area in 1980. Post-punk was in full swing, the UK music weeklies were stoking our enthusiasm, and everything seemed new and innovative, from Joy Division and PiL to the Pop Group and A Certain Ratio. There was no turning back.

Contributing to the glut: Decades of working in music journalism brought thousands of promotional copies into my possession. Plus, musician friends bestowed their handiwork on me on an almost nightly basis, and astute indie labels began reissuing loads of holy-grail records without which I couldn't live. On top of all that, I voraciously crave to hear music from all over the world in many different styles. This is why I can't have you over for dinner.

(Plot twist! My brother now owns zero records and CDs. He began selling his vinyl when CDs became dominant. Then he burned out on the collecting game altogether, after many years of working as a record-store clerk. A graphic and fine artist, he "ultimately sold everything in the name of being a creator and not a consumer. But mostly for the money." Jesus, are we even related?)

Anyway, shortly after I moved apartments, Jive Time Records was holding its blowout 17th-anniversary sale and the DUG crew was hosting its biannual Big Dig record show at Vermillion. This was a major predicament. Flash to that scene in Brian De Palma's Scarface in which Tony Montana snorts mounds of yeyo, his nose powdered white, his face a canvas of depravity. That is the scenario that awaited me—but with record dust on my fingers instead of a nose caked in booger sugar.

At Jive Time, I ran into my Peruvian collector pal Javier. He already had three LPs in his hands. "Are you going to the Big Dig?" I asked. He laughed, "You beat me to it—I was gonna ask you." Addiction is a terrible thing, but it can be a bonding agent. Then he gave me a tip about a Freddie King LP. I ended up dropping $103 on five LPs, including the debut album by Sub Pop's great 1990s group Pigeonhed, featuring Steve Fisk. For me, this represents fiscal responsibility.

And yeah, I went to the Big Dig, too. It's a great event if you like to see graying ponytails and paunchy guys in dad jeans. (Shout-out to the geezer with the Monks T-shirt, though.) I spotted Javier digging in a jazz crate, and he graciously gave up a Larry Young album that had been on my want list for years. That's friendship.

I ogled some rare records—an original Arzachel for $200, a Korean psych-rock jammer for $80, Bernie Worrell's All the Woo in the World for $48—but passed, in a rare display of restraint. I did purchase 10 records for $112, which I consider a small victory. As penance, though, I need to outsource at least 30 at home to make up for that influx. This is a ritual that I anticipate repeating ad infinitum... or until I grudgingly cash in my journalism chips, sacrifice what's left of my soul, and get a job with Amazon.