The Funeral Crashers of Seattle

A pair of uninvited party guests used to show up at Seattle events back in the day, steal slices of cake, and get into fights with each other. 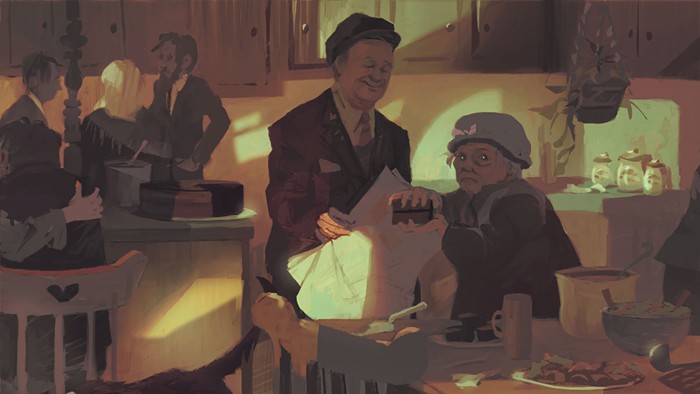 Pansy and George Kotolaris were mother and son. They were most often spotted at strangers' funerals or on the bus in 1970s Seattle, and they were usually squabbling.

I learned this in a pricelessly sincere Facebook group I'm in called "You know you're from Old School Q.A. Hill when..." Someone posted last spring, asking who remembered "George, an oldish son, and his elderly mother, Pansy. They would turn up at events, especially if there was food... They would stuff their pockets full... My guess is they would look in the paper for certain events or they just picked up the information. Sometimes Pansy would hit George over the head with her umbrella, and they'd have arguments."

I called my dad, a retired Metro bus driver, to see if he remembered them. "Absolutely," he said. "Weren't they Greek? The old lady always had flowers all over her hat, like she had an Easter basket on her head, and the son always had a camera. You'd hear them bickering before they got on the bus. I'd see them in front of St. Paul's in Lower Queen Anne."

As further research (and, uh, their last name) confirmed, George and Pansy were indeed Greek, and they were regulars at not only St. Paul's but at more or less every church in mid-century Seattle. Mooching free food was basically their full-time gig.

The idea of them being professional funeral crashers is perfectly marvelous and tempting to declare, but the fact is, the Kotolarises didn't discriminate when there was free food at stake. They went to strangers' weddings, store openings, election rallies, community center holiday parties, and the Torchlight Parade when the Seafair Clowns would throw candy. Funerals were their main bag, though. Their signature move, according to reports, was to bring a piece of newspaper to wrap up a piece of cake to take home as a souvenir.

Seattle writer Litsa Dremousis, born in 1967, is just barely old enough to remember George from church. "He wasn't disruptive and he never hurt anyone. It was just so odd. Wedding crashers are a thing, but who crashes funerals?"

Her mom, Anna, a retired deputy prosecuting attorney, has clearer memories of both George and Pansy attending events at St. Demetrios Greek Orthodox Church in the 1950s, where he was known as Crazy George.

"That's what all the Greeks called him," Anna says. "No one meant it as a compliment, but no one meant it as an insult, either. Also, there were so many Georges, so we used descriptors to tell them apart." Anna recalls George climbing up into the choir loft during the service to take photos—but there was never any film in his camera.

A local blog by author K. Thor Jensen says George's father/Pansy's husband, seafood merchant Harry Tico Kotolaris, died in 1953, leaving the two in a Victorian house on Capitol Hill that they gradually stuffed with at least 16 pianos, forcing them to live upstairs. George was found to be mentally ill in the 1940s; he was unable to work, so he stayed at home with his mother and their piano menagerie.

When I contacted Jensen to find out how he knew so much about the Kotolarises, he dropped a fantastically bizarre info bomb.

"In 1997, I was working at a title insurance company. Every real-estate transaction is filed with the county, which records it on 16 mm microfilm. At the time, their computer system had simple abstracts of these filings, and the title examiners would run that program and give me a list of microfilm reels to pull, to print pages from.

"I noticed one of the documents was significantly longer than the others, and it contained handwritten text, photographs, and newspaper clippings. That's when I learned about George Kotolaris using the King County property records as his own personal diary. The loophole in the law—that you could have them record anything as long as it was attached to a real property and you paid the filing fee—let him write a totally unique schizophrenic autobiography that drove my fellow title examiners absolutely fucking nuts."

Starting in 1968, the Kotolarises traveled to the courthouse every weekday to file notes and clippings as title deeds, more than 100,000 in all. They would opine about Catholicism, abortion, and cremation. After Pansy's death, George also wrote recurrently about "the gay act," AIDS, and male prostitutes, as well as where to get cheap/free food.

These "title deeds" reveal a dark coda to the story. In the late 1970s, George's rants largely chronicle his worries about Pansy, who was moved to the Columbia Lutheran Home in Phinney Ridge following a stroke.

He was denied daily access to her, and his efforts to get her released are the main subject of his writings—the title deeds being the only way, in his mind, that his frustrated rage could be heard by someone. George did eventually manage to spring her out of eldercare jail in 1974, with the help of Greek American lawyer Harry Platis.

Pansy died a year later, at the age of 86, and George drifted around from boardinghouse to boardinghouse, living on Social Security checks, endorsing them as "George Nutey" or "George Incompetent." Despite his missives against homosexuality, he had relationships with other men—primarily with a guy named Bill, a patient at the infamous Western State Hospital.

When Bill got out of the hospital, he and George lived together in a low-income apartment briefly before breaking up. George moved into an unheated basement and later the lobby of a church. He continued to record his diary entries at the courthouse, and they become increasingly sexually explicit, to the point where salacious bits were censored by courthouse employees before being recorded.

Because of that censorship, we know maddeningly little about the end of George's life. He developed a hernia and elephantiasis of the scrotum in 1989, and he died in 1990 at age 60, "at a bus stop somewhere down south," a Facebook commenter wrote. His and his Pansy's cremains are both in the mausoleum in the Holyrood Catholic Cemetery in Shoreline.

The only cheerful nugget in this sad story is that the Kotolarises were too eccentric to be forgotten.

George was actually remembered recently at the funeral of former Catholic arch- bishop Raymond Hunthausen, in July of 2018. One of Hunthausen's colleagues mentioned that in 1987, George was living in squalor, with 60 bags of unwashed laundry and his collection of cake slices (and other food keepsakes) attracting cockroaches, and Hunthausen organized a cleanup crew. George himself later recounted: "Hunthausen cleaned up my apartment. He was down on his hands and knees, mopping up my kitchen, the bathroom, the toilet, everything."

Another local church leader, Reverend Carol Ludden, an ordained Episcopal priest who started the Pike Market Ministry, once delivered a tribute to George that you can find online. "George is a Seattle institution," she said. "He is known to go to all the important weddings, funerals, and church services in town."

In her remarks, she acknowledged that "George isn't always welcomed. He's not on people's guest lists."

George and Pansy have been dead for decades, but with Día de los Muertos coming, I'm reminded of the Mexican concept of las tres muertes, wherein people die not one but three deaths. First, when our body dies; second, when our body is buried or burned and we're no longer visible; and third, when a living person speaks our name for the last time.

It's a stretch, but I like to apply the idea to the Kotolarises, who'd crash any party but loved funerals most. It's nice to imagine them still crashing funerals around town, so long as we're still talking about them.