How You're Going to Die

Seattle is a beautiful and healthy city. It's also a ticking time bomb. 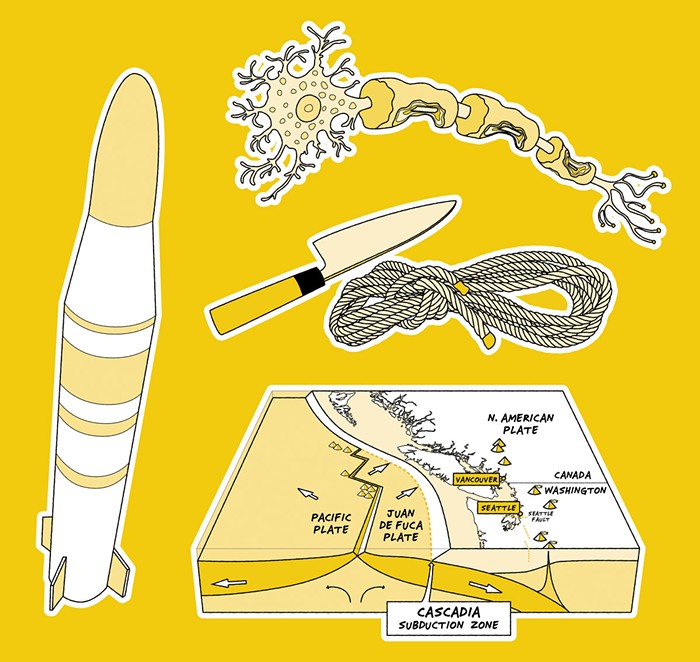 Seattle is a green city, a healthy city, a city where half the population owns snowshoes and more people go to spin class than to church. And yet, despite its reputation as one of the healthiest and fittest cities in America, Seattle is also a ticking time bomb—in more ways than one. While you're sure to enjoy our fair city while you're living, here's how life in this city can end.

Look to your east. Now look to your west. Lurking behind those dense gray clouds are the Cascades and the Olympics, respectively. These are your new wilderness playgrounds. But while these mountain ranges provide some of the most scenic views in the continental United States, the reason they exist is because the tectonic plates beneath your feet are volatile and will, at some point, shift. Or even worse, subduct.

While everyday natural disasters (hurricanes, floods, fires, blizzards, droughts, etc.) are relatively rare here, we are deep in earthquake territory, and when our fault lines go, they're going to go big. In the event of a major earthquake, "everything west of I-5 will be toast," as a Federal Emergency Management Agency administrator told the writer Kathryn Schulz in her Pulitzer-winning New Yorker article "The Really Big One," which I highly recommend you read before unpacking your bags (unless you are prone to panic attacks, in which case, don't). But don't take that to mean that if you live and work east of the freeway you're going to be fine: You're not.

In the event of a 9.0 earthquake, buildings will fall, bridges will break, and the very land under your feet will turn to liquid. The city advises residents to have at least two weeks' worth of food and water on hand (good luck storing that in an aPodment), but my plan, should I be unfortunate enough to survive, is to drink rainwater and loot the nearest pot shop for edibles. (Oh, and if earthquakes aren't enough to trigger your nightmares, there are also active volcanoes surrounding you—see page 15. Welcome to town!)

In 2017, North Korea developed a nuclear warhead that can reportedly reach the US mainland. Also in 2017, Donald Trump was sworn in as US president. The timing was unfortunate, especially for those of us here in Seattle, which is situated right between two unstable leaders with weird hair, daddy issues, and nuclear arms at their disposal.

While Seattle might not be as ripe a target as, say, Washington, DC (or wherever Donald Trump is currently playing golf), we're still a target, thanks to our iconic skyline, wealth of tech companies, and cache of nuclear weapons at nearby naval bases in Kitsap County.

Now, I'm not saying this is going to happen. The chances are extremely slim that we're going to get hit by a nuke—even with Donald Trump as president—but even crazier than the possibility of a nuclear strike is the fact that in Washington State it is illegal to prepare for this nightmare scenario. Yes, really. In the 1980s, state lawmakers marked the end of the Cold War by passing a law that prevents Washington State Emergency Management from planning for a nuclear attack. At the time, this was probably a good-faith symbolic effort to usher in peace, but from today's vantage, it seems like a big... what the fuck?

Some lawmakers have been trying to repeal this dumb law, but until they do, the state can't do anything to prepare, so you may want to consider building your own fallout shelter. Good luck!

Despite our reputation for wellness, and our blissful lack of horrible bugs like Lyme-disease-carrying ticks and malaria-bearing mosquitoes, Seattle has a weirdly high prevalence of several illnesses. We have one of the highest rates of multiple sclerosis in the country, a disease for which there is no known cure and which gradually steals one's ability to move, speak, eat, and breathe.

Some researchers speculate that the high rates of MS are related to our lack of sunshine and the resulting vitamin D deficiency, which makes it somewhat ironic that we also have disproportionately high rates of skin cancer, too. According to the Centers for Disease Control and Prevention, Washington is in the top 10 states for rates of melanoma, an especially deadly form of skin cancer that is easy to prevent (wear sunscreen!) but prone to spreading to other organs before you even know that you've got it.

So, in short, we don't get a lot of sun here, which might kill you, but what little sun we get might also kill you.

The good news is that Seattle's violent crime rates are actually pretty low (don't listen to people who try to convince you otherwise, aka KOMO News). The bad news is that Washington is well known for a preponderance of serial killers, from Ted Bundy to Gary Ridgway to Robert Lee Yates to Westley Allan Dodd to Kenneth Bianchi. And that's just the ones we know about.

Katie Herzog is a former staff writer at The Stranger.
The Stranger depends on your continuing support to provide articles like this one. In return, we pledge our ongoing commitment to truthful, progressive journalism and serving our community. So if you’re able, please consider a small recurring contribution. Thank you—you are appreciated!
CONTRIBUTE NOW