The local tradition around teriyaki. 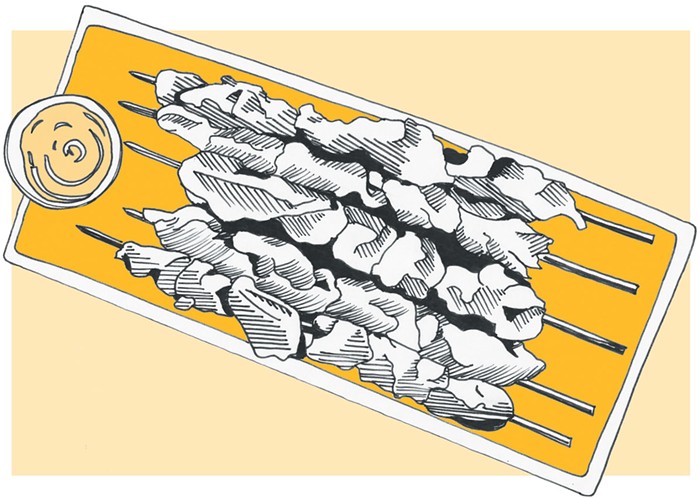 Teriyaki is an almost religious institution for a generation of Seattleites. Jessica Stein

Philly has cheesesteak. Chicago has deep-dish pizza. And Seattle has... teriyaki.

If you're new to town, this might surprise you. Yes, we have truly local ingredients, like salmon and geoducks, and local spins on food staples, like the Seattle dog (a hot dog with cream cheese and sautéed onions). And yes, the word "teriyaki" is used on menus from its native Japan to New York City. But no dish holds the title of Seattle's favorite comfort food more than teriyaki.

There are some simple rules to teriyaki in Seattle: It starts with deboned chicken thighs that have been marinated for days in a sweet soy, ginger, and garlic marinade, and then grilled until the marinade's sugars caramelize on the thigh's skin. That thigh is then sliced up and served on bountiful beds of perfectly cooked Calrose rice next to a simple cabbage salad. Then the whole thing is wrapped up with one final touch: It must be cheap.

Affordability has been key to teriyaki ever since Toshi Kasahara opened Seattle's first teriyaki restaurant in 1976. According to a review in the Seattle Times, a meal at "Toshi's Teriyaki Restaurant" included marinated chicken on skewers with rice, salad, and a cup of tea for only $1.85, which was cheap even by 1970s standards. It's now called Toshi's Teriyaki Grill.

It wasn't long before Toshi was opening more teriyaki shops, slowly changing his style from skewered chicken (similar to the yakitori style of Japanese grilling he was emulating) to half chickens to the aforementioned deboned chicken thighs, which have become the standard for Seattle teriyaki.

Other entrepreneurs, increasingly from the Korean immigrant community, followed Toshi's lead and started opening teriyaki shops until eventually you could find a teriyaki shop in every strip mall in the Puget Sound area. Teriyaki, which at this point was essentially Americanized Japanese food made by Korean immigrants for a largely white clientele, had suddenly become a quintessential part of Seattle.

I recently caught up with Toshi at his small teriyaki shop in the suburb of Mill Creek. Toshi franchised his shops in the 1990s but later shut the franchise down after he realized he would rather cook food than manage people ("It's easy to tell people they are doing a good job, but it's not easy telling them they are doing something not good"). He told me that when he opened his first restaurant, he was simply modifying a Japanese cooking style, changing the protein from fish to chicken, in an affordable package.

"When I was growing up, I actually cooked fish with teriyaki, so it's nothing I created," Toshi said. "I just wanted to have my own business."

It's not hard to see why teriyaki became the staple comfort food of Seattle. The rice fills you up, the sweet and savory chicken satiates, the salad provides crispness and greenery. Teriyaki shops form a bedrock of the community; I once saw an old Korean teriyaki shop owner cry when one of her young patrons left for college.

Teriyaki shops are almost religious institutions for a certain generation of Seattleites, but as Seattle rapidly grows wealthier, some shops across the city are closing. It seems like New Seattle has less desire for a humble meal like teriyaki. Fortunately, there are still ample teriyaki opportunities. Some local favorites include Midori Teriyaki on Howell Street in South Lake Union, Ballard Choice Deli & Grocery on Eighth Avenue Northwest, or Teriyaki 1st on University Way in the University District.

Or you could head to Mill Creek and try the original. The 70-year-old Toshi told me he doesn't have any plans to quit making grilled chicken anytime soon.

"As long as I can move, I'll be doing it," Toshi said. "I really don't have anything else to do."

Lester Black is a former staff writer for The Stranger, where he wrote about Seattle news, cannabis, and beer. He is sometimes sober.
The Stranger depends on your continuing support to provide articles like this one. In return, we pledge our ongoing commitment to truthful, progressive journalism and serving our community. So if you’re able, please consider a small recurring contribution. Thank you—you are appreciated!
CONTRIBUTE NOW