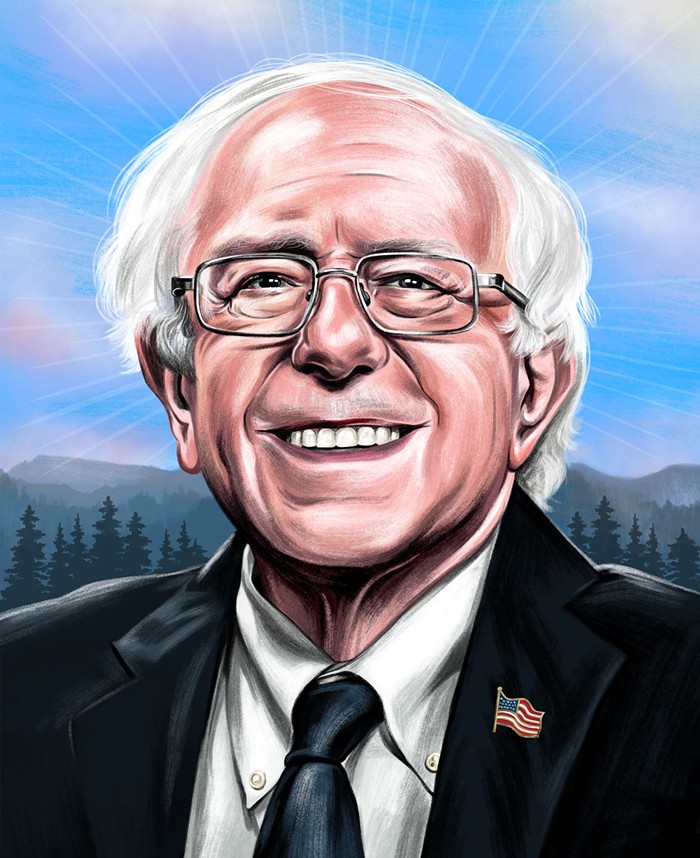 The Democratic field is more progressive than it's ever been.

Both Bernie Sanders and Elizabeth Warren are talking about replacing the private health insurance market with a public system that covers everyone, and no one is laughing them out of the room. Even Pete Buttigieg, the khaki-wearing homosexual soldier, and Joe Biden, a man who has been in politics so long he's seen bell-bottoms come back twice, have put forth agendas to the left of anything that's come before. Hell, one of the billionaires trying to buy the election is proposing a $5 trillion tax increase on the rich.

But there is only one candidate who can electrify the electorate enough to beat Donald Trump, and that's Senator Bernard Sanders of Vermont.

The SECB did not come to this decision lightly or without debate. But after pounding a bunch of alarmingly caffeinated seltzers and wolfing down handfuls of gluten-free cookies, we found ourselves largely united behind Bernie Sanders.

When it comes to this particular presidential race, Sanders has the strongest platform, the biggest grassroots network, and the best chance of sending the Cheeto-in-chief back to his gaudy suite in Midtown Manhattan. (Or, better yet, to prison.)

Let's start with his platform. Sanders wants to raise the minimum wage to an actual living wage. He wants Medicare for All. He wants massive reinvestment in public housing. And he wants a Green New Deal that transforms our fossil-fuel economy into a green economy while providing jobs for those who need them.

We're not natural optimists (especially after 2016), and to be honest, we don't really think a Sanders revolution will rise up to push every one of these reforms through Congress. But we understand how the legislative process works. If you want a piece, you gotta ask for the whole pie. And Sanders is fucking shouting for that damn pie with whipped cream and boozy cherries on top.

Even if Medicare for All fails to become a reality—at least one Sanders campaign surrogate has recently suggested that the end point of his aggressive health-care stance may simply be (finally!) a public option—President Sanders will still have power over foreign affairs, monetary policy, and executive orders. And it's here where he really stands out from the pack.

President Sanders will transform our country's disastrous policies in the Middle East and Afghanistan, ending endless wars and cutting ties with murderous regimes. Hawks will attack him for this, but the last several decades of war have made warmongering unpopular, at least among those of us who don't work for Halliburton. Sanders's vote against the Iraq war and his tireless work for veterans lends him credibility that should insulate him from attacks on these issues.

As for the economy, there is no doubt in our little pot-addled brains that Sanders will appoint progressives to the Federal Reserve's Board of Governors and demand more transparency from the shadowy institution.

Finally, the only thing that gets the SECB more pumped than irresponsible quantities of caffeinated seltzer is Sanders's list of Day 1 executive orders.

We're talking reinstating DACA, closing the concentration camps at the border, lifting the Muslim travel ban, ending federal contracts with companies that pay workers less than $15 an hour, reversing Trump's gag rule on abortion referrals, and fucking legalizing motherfucking weeeeeeeeeeeed. Or, rather, taking weed off the list of controlled substances so the Feds can't use it as an excuse to lock up brown and black people.

We are fully aware that once Sanders secures the nomination, Trump and the Republicans are going to scream "SOCIALIST!!!!" if not "COMMUNIST!!!" at the top of their lungs. But they'll paint every Democrat with that brush, so we might as well nominate the actual socialist—the one who's going to repeat the following lines, clearly, consistently, and in his trademark Brooklyn growl, every day until November 3: "Trump is the socialist. He's just a socialist for the rich. He wants to take away your Social Security and Medicare. We want to expand your Social Security and Medicare."

As some members of the SECB rightly pointed out, Elizabeth Warren's platform is very similar to Sanders's, and her plans are often more detailed. It is also true that breaking the country's highest and hardest glass ceiling by electing the first woman president could inspire girls and women in a profound way (so long as that first woman isn't, say, Ivanka Trump).

Sanders, on the other hand, has some of the strongest support among young voters, people of color, and the lower-income whites who made the difference for Trump in 2016. That's the coalition Democrats need to win—and so far, Sanders's team is doing it best.

Plus, we have to face the facts: For whatever reason, some portion of Sanders's voters will not vote for any other Democrat in the race, or will even vote for the goddamn incumbent. It happened last time around, when 12 percent (W! T! F!) of Sanders supporters in the primary ended up voting for Trump in the general election. These Chapo Trap House–listening idiots might be holding the race hostage—but the stakes are so high that we're willing to pay the ransom if that's what it takes to save the country from four more years of Trump.

Besides, no other candidate—including Warren—has been able to unite such varied American thought leaders as Pramila Jayapal, Glenn Greenwald, Cardi B, Killer Mike, Brandi Carlile, Lizzo, and Joe Rogan's right bicep. No matter what you think of his most ardent fans (and, yes, some Bernie Bros need to get off the internet and take out their aggression at spin class), what they are is passionate, and it will require passion to beat this particular incumbent. We saw in 2016 what happens when unpopular moderates win Democratic primaries, and we can't make that mistake twice.

We're a polarized country, and moderates—along with Mitch McConnell—hold their fair share of the blame. Though Barack Obama made progress on health care, years of trying to find middle ground with Republicans and conservative Democrats led to weak-tea policies that failed to slow rising income inequities, failed to cool a warming planet, and failed to bring troops home for good. In 2016, too many people felt like the government wasn't meaningfully addressing their problems, so they threw a bunch of grenades into the system or else sat the fuck out. That got us Donald Trump, and it cannot happen this time around.

Democrats need to start bringing their own grenades to this fight. And if we want to end this era of polarization, we need to win this race and then work to implement major changes that improve people's daily lives so deeply that Republicans would sooner die than try to cut them out. The only candidate who can do all that is our brother from Brooklyn. On primary day, vote for Bernie Sanders. The SECB, and the future, demand it.