Washington's lands commissioner is fighting wildfires, insurance companies, and the status quo across the state. 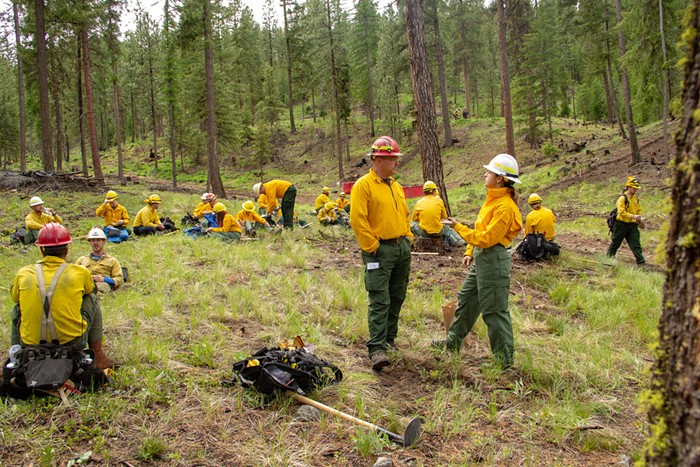 Hilary Franz in the field with firefighters from the Central Washington Interagency Fire Training Academy. Courtesy of the Department of Natural Resources

When she walked out of a half-hour meeting with Governor Jay Inslee earlier this month, Washington commissioner of public lands Hilary Franz turned to her staff and whispered: "Am I threatening? Am I intimidating to you?"

Then Franz, ever the happy warrior, burst into laughter for the 400th time that day.

Lately she's been lobbying intensely for a bill that implements a 20-year forest health plan and a 10-year wildland fire protection plan recently released by her Department of Natural Resources (DNR). The plans are the first of their kind from the agency, and together they provide a long-awaited blueprint for how to tackle increasingly damaging wildfires ravaging the state.

If the governor signs the bill, it will be a huge victory for the trees, for a lot of stressed out firefighters, and for all of our lungs. It also won't hurt Franz's campaign for a second term.

Franz is only the second woman to serve as commissioner of public lands since statehood in 1889. As a land-use and environmental lawyer, she was accustomed to 40:60 gender ratios in the workplace, but the world of firefighters and landowners has been decidedly more lopsided.

After knocking out King County Council member Dave Upthegrove in the 2016 Democratic primary, and then going on to win the general election against navy vet Steve McLaughlin, Franz remembers one fire commissioner out east asking her, "How could a little lady like you do a big job like this?"

Representative Joel Kretz, a Republican who represents a Northeast Washington district hit hard by fires, was also unimpressed with her win. When the two first met, he recalls telling a colleague, "I'll let her talk, then I'll kill her."

And one woman lawmaker even asked her, baffled, who was taking care of her sons at home on Bainbridge Island while she worked.

But Franz understood she'd have to overcome these prejudices pretty quickly, given the miserable state of Washington's forests and the growing threat to the lives of firefighters who could die on her watch.

Meanwhile, she does her part to encourage solidarity among women leaders in Olympia. To celebrate the addition of so many women to the legislature in 2018, she sent them all desk placards that read "Do Epic Shit."

In her corner office, Franz pointed to a photo of dead pines on a mountainside. "We're supposed to be the Evergreen State. We're not looking very green," she said.

Before Franz took office, Washington had suffered three of the worst fire seasons on record. A million acres burned in 2015, and three firefighters died battling a firestorm near Twisp. Back then, firefighters joked that DNR stood for "do not respond, do not resuscitate."

Changing that reputation wasn't going to be easy. DNR didn't have a budget big enough to fight Washington's increasingly damaging fires while also thinning out the state's overgrown forests. With no money and no plan yet, Franz focused on what she could control: structural changes and building better relationships in rural communities.

She emphasized quick responses to fighting fires, prepositioning equipment closer to fire prone areas and repositioning based on weather and wind conditions. She also deployed the agency's eight helicopters—all of which, Franz is quick to say, fought in the Vietnam War—whenever fires popped up instead of when they started growing out of control.

She also made it a point to travel around the central and eastern parts of the state, meeting face-to-face with county commissioners and lawmakers who had developed an intense animosity toward the agency under former commissioner Peter Goldmark.

The focus on building relationships seems to have paid off. A month after her election, Franz met with Representative Kretz, the guy who said he wanted to kill her. After the two "went at it for an hour," Franz asked him to give her a chance, and he said he would. Two weeks later, she accompanied him on a trip to Sinlahekin Wildlife Area in Okanogan County to see forests that had been properly managed to resist wildfire. "I thought, 'Oh wow, we never got this kind of attention from Little Peter,'" Kretz said, using his nickname for Goldmark. (Goldmark didn't respond to multiple requests for comment.)

When heavy flooding hit Okanogan County in 2018, Franz went out of her way to send pumping equipment and firefighters. "The community came out, and they were grateful," Kretz said. As a result of Franz's action and attention, Kretz now supports her bill, though he can't say how many other Republicans will, due to the payment mechanism.

Aside from the tragic loss of life and the enormous health risks, fighting fires in unnaturally thick forests with an underfunded force is expensive. Each year, Franz has to beg the legislature for an average of $153 million, requiring the state to tap emergency funds and part of the general fund.

The desire to create a dedicated revenue stream for firefighting and forest health is what landed Franz in Governor Inslee's office. House Bill 2413, sponsored by Representative Joe Fitzgibbon, would impose a $5 surcharge on home and auto insurance policies (which insurance companies hate, and which Olympia views as a tax hike). The tax would raise $63.5 million per year. Part of the money would fund new equipment and firefighters, while the other part would hire more people to remove dead trees and brush from 2.7 million acres of forests in Central and Eastern Washington. Those workers would also reforest a million acres that have already burned.

Though the fires in 2019 weren't as bad as the fires in 2018, which caused Seattle to register the worst air quality in the world some days, Franz says the state is still a tinderbox.

Three towns in Washington—Roslyn, Cliffdell, and Twin Lakes—are at greater risk of being wiped out by fire than Paradise, California, which was razed by the Camp Fire in 2018. Wildfire threatens nearly 2.2 million homes across the state. And insurance companies have been dropping clients who live in fire prone areas.

Though Franz has built a surprisingly diverse coalition of supporters, she faces intense opposition from the powerful insurance lobby. While Franz thinks she can assuage their concerns, she also faces resistance from inside the house. A representative for the governor's office said Inslee "supports increased investments in forest health and fire suppression," but he's still reviewing the bill and hasn't taken a position.

In their meeting, Franz said, Inslee recognized that it's a short session and an election year, so it's not a time when legislators like passing tax bills. He also mentioned other "competing demands," such as the mental- health crisis, the homelessness crisis, the affordable-housing crisis, and the million other crises gripping the state.

Franz gets it, but she argues her bill would free up $50 million in the capital budget for any of the crises (because appropriators currently tap into the capital budget to fight wildfires). "To me, it's a win for everybody. It's a win across the urban-rural divide. And the sooner we can start making these investments, the sooner we can reduce the loss of our forests, and reduce emissions, and reduce the loss of lives," she said.

"There will always be a reason to kick the can down the road," Franz added. "But this is a time for leadership."