Turning Up the Heat to #MeltICE

The Evergreen State has a phalanx of immigrant-rights warriors fighting back against the president's cruelty. 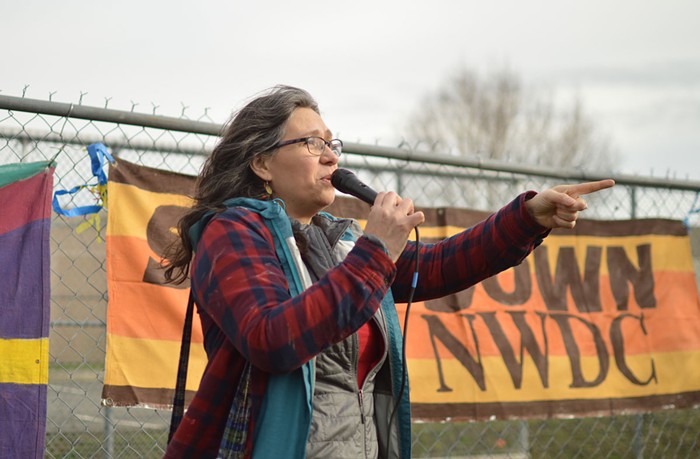 Maybe you fled the Khmer Rouge's genocidal regime in Cambodia in the 1970s only to face deportation proceedings 40 years later. Maybe you are a Salvadoran asylum seeker threatened with death for being trans. Maybe you are a Russian immigrant on a deadly hunger strike at the Northwest Detention Center. Or maybe you're an Iranian family living in Redmond that was harassed at the Blaine border crossing coming back from a Whistler ski trip and Persian pop concert in Vancouver.

If you were any of these people here in Washington, then you wouldn't be alone. Amid President Donald Trump's terror campaign against immigrants, which has roots in the George W. Bush and Barack Obama administrations, there are tireless immigrant-led organizations and activists right here in the Evergreen State who have your back. If Washington is a sanctuary state in any meaningful sense of the term, then this is the grassroots connective tissue that makes it so.

Anyone entangled in the spiderweb of US immigration law is screwed without a good lawyer. A handful of idealistic young lawyers realized this in the mid-1980s and began representing Central American asylum seekers fleeing that decade's crisis: brutal civil war. Their efforts eventually became formalized as the Northwest Immigrant Rights Project (NWIRP), a registered nonprofit that fires on all cylinders. Last year, it provided direct legal services to a whopping 11,058 people in Washington while getting at least some basic legal knowledge into the hands of another 7,682.

As the lawyers representing 4,405 active cases last year, the team notched several wins: 62 asylum cases approved, 145 deportation proceedings stopped, and 266 green cards issued. NWIRP's budget has grown almost threefold in five years to $13 million annually in order to keep up with the frantic, all- hands-on-deck pace of the problems facing today's immigrant communities. Donations are essential, as are public funds like the Seattle–King County Immigrant Legal Defense Network—an example of our local government putting our money where our mouth is when we describe ourselves as a sanctuary jurisdiction. (My wife and I donated to NWIRP in 2018 in honor of our wedding.)

At the helm is Jorge Barón, himself a Colombian immigrant, who became a staff attorney in 2006 and has been the executive director since 2008, which means he has seen three presidential administrations seesaw on their willingness to treat immigrant rights like human rights. But nothing previously has been like what immigrants face under the Trump administration.

"The last three years have been busy—but all negative busy," Barón says. "Bush and Obama targeted specific people. Trump has gone after everybody."

For example, José Robles, an undocumented Mexican father of three, applied for a U visa for victims of crime, only to have his deportation case accelerated by Immigration and Customs Enforcement. After living in downtown's Gethsemane Lutheran Church for a year, he is now in ICE custody. A judge denied his bond request in February, but if it had been granted, he could have sought help paying the $5,000 to $25,000 bond with the help of the Fair Fight Bond Fund, which helps cover the high cost of bonds for the largely working-class immigrants facing deportation proceedings. Evidence shows that an individual's chances of winning their case improve as much as twentyfold if they can get bonded out, as preparing for court is nearly impossible from inside the detention center. (After bonding out 40 people last year, the fund has been depleted and its managers are actively soliciting donations.)

Ultimately, the Trump administration's scorched-earth approach—targeting the once bipartisan refugee program, throwing up travel bans left and right, attempting to dismantle the Dreamer program, and squeezing the system with administrative rule changes like increased application fees and a harder path to permanent residency for people who use public benefits—has created a sense of despondency.

"There's this chilling effect that's very damaging," Barón says, as NWIRP's clients must make agonizing choices like whether to accept a housing subsidy now in a time of acute financial need that might poison the well for future green-card eligibility. Looking ahead, Barón is bracing for a Supreme Court decision on the Deferred Action for Childhood Arrivals (DACA), or Dreamers, program. "I am not super optimistic—2020 is going to be a very rough year."

The further dissolution of any hope in the political process is vindication for Maru Mora Villalpando, an undocumented immigrant who gave up lobbying for immigration reform in favor of watchdogging the Northwest Detention Center in Tacoma. She hopes 2020 will be the year that Tacoma and Washington State finally express public support for her long-term goal: shutting down the federal facility.

"For years, I wanted to do something beyond the safe, traditional route of advocacy," she says. "I realized the fight was not in policy, it was in direct action."

Villalpando leads La Resistencia (formerly the Northwest Detention Center Resistance), which she underscores is not a formal institution but a grassroots movement. "We're pueblo, and as pueblo we are sick and tired of this and we want to end this nightmare," she says. The only way to wake up from this bad dream? Free the people inside and close the detention center.

In 2017, Villalpando received a notice of deportation, which she believes was retaliation for her activism. Her US-born daughter hopes to sponsor her for legal status. Her next court date is in February 2021, and she is one of more than a million people caught in an enormous backlog.

La Resistencia volunteers staff a 1-800 number to document abuses inside the detention center. When someone shows up in Tacoma after an ICE Air flight, bewildered and afraid, the word gets around quickly: Call La Resistencia.

Averaging about 20 calls per day, they have heard from people on the inside hailing from at least 17 countries on five continents. "The vast majority are people of color from poor countries," Villalpando says.

If they are looking for a lawyer, the volunteers refer them to NWIRP. But if they find maggots in their food or have been assaulted, La Resistencia documents every abuse about the shady business whereby companies like GEO Group, AccessCorrections.com, and Telmate run a for-profit prison. For example, La Resistencia commits to depositing $20 per month to every person who calls, but makes sure to inform them that $5 goes to AccessCorrections.com.

"It's a good opportunity to remind people that they are making a killing on you being detained," she says.

The system drives some people to the edge. La Resistencia has supported 19 hunger strikes inside the detention center by publicizing the striker's demands, providing wellness check-ins, and communicating with the striker's family. In what she calls a bittersweet claim to fame, Villalpando's expertise has been consulted to support seven hunger strikes at other ICE detention centers.

As the profit-driven immigration deportation bureaucracy becomes further entrenched, those working both inside and outside the system are circumspect. "The election matters tremendously. But even if things get better, some bad policies will continue for a really long time," Barón says.

Villalpando is characteristically more blunt. "If a Democrat gets elected, people are going to forget about this issue," she says. "It's not just about getting rid of Trump. We need to get rid of the entire machine."

Comments 3
Tags: Features
The Stranger depends on your continuing support to provide articles like this one. In return, we pledge our ongoing commitment to truthful, progressive journalism and serving our community. So if you’re able, please consider a small recurring contribution. Thank you—you are appreciated!
CONTRIBUTE NOW