Previously on Quasi-Hiatus, the Indoor-Only version of the Beloved Feline Film Festival Resumes This Weekend 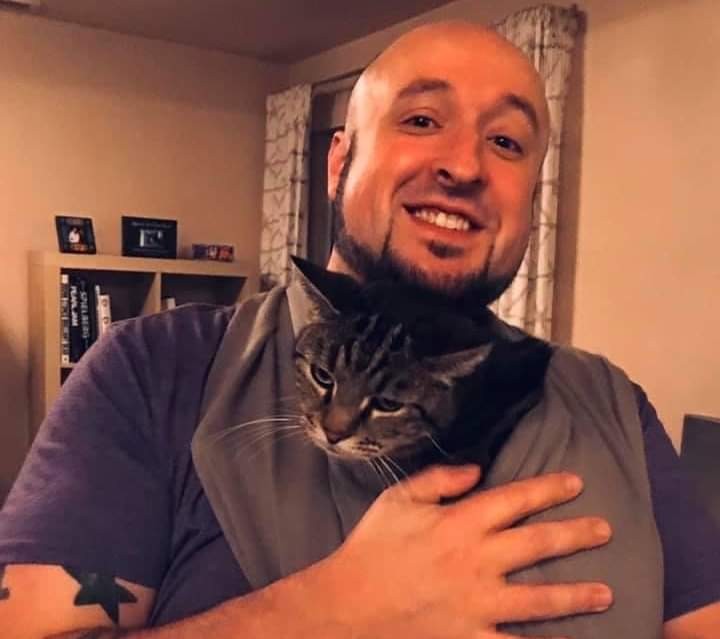 Will and his kitty, Nin, who seems a little jealous about all this watching of other cats, honestly. Will Braden

Holy cats, do you know what's happening on the Hill this weekend?

Oh, yeah, that—and it's also the glorious return of CatVideoFest, the brainchild of Seattle-born Will Braden (who, full disclosure, I went to school with for my entire childhood). Will might be better known to some as the “lying filmmaker” of the Henri, le Chat Noir videos, and he took the time to chat with me about what it's like to be a grown man who watches cat videos for a living, and what we can expect from him this weekend.

THE STRANGER: Okay, I confess that I've never gone to CatVideoFest, but I will, now that it's back! This is sort of silly, but because I’ve never gone, I've always wondered about entry-level things, like: how do you choose the order of the clips?

WILL BRADEN: That’s not entry-level! I mean, relatedly, people always want to know, “How is this any different than me sitting at home, watching suggested cat videos from the algorithm on YouTube for free?” so this is better than that. The answer is that I curate it really carefully, because I want people to think there was actually a point in having gone to the theater once we get them there. I want to surprise them, you know?

So, I actually put a lot of thought into variety, making sure there's a mix of long clips and short clips, or a balance of instructive clips, stupid clips, and just weird, ridiculous clips. Finding montages. Creating an ebb and flow, like how a band would choose a setlist. I especially want people to see some things they haven't seen before, so they feel like they get their money's worth. These folks seriously watch cat videos online allllll day, and they know their material. So I got the deep cat video cuts for them!

These cat ladies, you mean?

Yeah, people make jokes, but… there are a lot of cat ladies.

Whatever, it’s fine; I’m a cat lady. It makes perfect sense to say that cat ladies are attracted to CatVideoFest. Wait, okay, so do you host the show? Is it like the Oscars, where you show up interstitially between the video clips to crack wise?

No, not really. The reel of clips just plays straight through like an indie film, and I sort of host it? I used to travel around to every show across the nation, [to] all the different theaters, and a lot of the events would be a combo of a fundraiser and then the cat videos would play after. They’d show the reel at a black-tie event for a shelter, and I’d make a guest appearance.

Now I only come to the Seattle shows to tell silly jokes before and after the whole cat video reel, so people know I'm there and can chat with them afterward. Or so I can coordinate with whichever shelter I'm working with to raise funds, since a portion of the ticket sales go to pet shelters. Here in Seattle, the show benefits PAWS.

Very good, my personal favorite. Hey, do you have a favorite clip right now, so we can give newbies (me) a taste of what’s to come at the show this weekend?

This one isn’t in the reel this year, but it’s my favorite clip of all time. Hard to say why exactly. I just love it.

Nice, I’ll save it for later. Speaking of later: How long was CatVideoFest's pandemic hiatus? Just a year?

Well, we didn't have a hiatus, per se. We did have shows last year—just way fewer than usual—and they were outdoors. We had shows at drive-ins and in parks. It was an off year for CatVideoFest, let’s say. Then before that, in 2020, we were lucky that we’d already done most of our shows in February and March, right before the lockdown. But we’re back to our original situation now, where we show the reel in a regular movie theater with walls. So it'll be interesting to see how everything has changed for indoor live events.

Haha, no, not as such. I just mean the company that creates the digital cinema package that gets sent to theaters, and they also handle promos and posters, etc. Then I choose the videos, the music, and contact the owners of the videos—stuff like that. That’s “we.”

Oh, dang, you write the music too?

I do about half of it myself, and the other half we source from local bands.

And you were a film major, yeah?

Yeah, I went to Seattle Film Institute. But before that, I majored in creative writing and Spanish at Western, and people are always like, "Why didn't you have Henri speak Spanish, if you can actually speak it?" [in “Henri, le Chat Noir,” Will's film series about a Francophone tuxedo cat with ennui], because they thought my French pronunciation was so terrible.

Well, that was the joke, though, right? He’s depressed because he’s French.

Everyone knows this. And, uh, speaking of ennui: What are your great regrets about this life you’ve chosen for yourself?

I mean, I got into Brown University and didn't go. Things like that? No, but seriously, for a while, when the “Henri” videos were really hot, I had some opportunities that I didn't take. For example, I could've been on The Today Show, but they wanted me to bring the cat to New York! I didn't want to fly across the country with poor Henry [Henri’s real name was Henry] and have him scratch me and freak out and be unhappy on live television. But man, sometimes I do think, "I coulda been on The Today Show!"

Yeah, but it sounds like a bad time, and millions of people would have watched it going badly. Maybe that would've been your biggest regret of all, and you dodged it.

Yeah, probably. Okay, I'll switch my answer to, "I shoulda held onto more of my Bitcoin."

What would you tell a 14-year-old kid who wanted to follow in your footsteps? Don’t say Bitcoin.

You know, it's funny: I have, a few times, been brought out in front of kids at schools as a look-what-I-do-for-a-living, career-day thing, where I show part of the reel and get to talk to the kids. Like, "Hey, children, here's a guy who watches cat videos all day!"

And each and every time, someone from the staff has pulled me aside beforehand and said, in hushed tones, "You have to tell them that you went to college and studied this. You cannot let these kids think you taught yourself how to make a cat video festival, and now, that's your job." You must tell them, "Look, I learned how to read first. I went to college, where is where I learned how to use editing software.’"

So, yeah, my official advice for kids is to learn how to do this stuff for real, professionally, before you start playing around with unreliable, internet-based career options. Before you get to have a business card that looks like mine.

Anything else you want to tell the people?

We're starting DogVideoFest in the fall. I’d love to tell the people that! Also, SIFF is showing the creepy CGI version of CATS from 2019 after the later show on Friday night, as a feline double feature! But honestly, as long as you get the dates of the show right, I don't really care what else you say about me.

Will’s your host at CatVideoFest 2022, which runs from Fri June 24, through Sun. June 26, at SIFF Cinema Egyptian, with seven different showings. Then, from Fri July 1, through Fri July 7, it’ll be at The Grand Cinema in Tacoma.