Lightyear’s same-sex kiss has attracted the ire of conservative idiots looking for something to complain about. CROUTON

Nearly 30 years after Toy Story’s original release, Pixar is dipping back into a well of nostalgia with Lightyear, a reimagining that depicts Buzz Lightyear not as a toy but a character in a sci-fi blockbuster.

Currently in theaters, the film has an unexpected tie to the Pacific Northwest. Director Angus MacLane grew up just outside Portland and slipped a few regional references into the film. Lightyear’s inclusion, exclusion, and re-inclusion of a same-sex kiss has also attracted the ire of conservative idiots looking for something to complain about.

In a Zoom interview with The Stranger, MacLane opened up about his Portland roots, the film that inspired him to make Lightyear, and that blink-and-you’ll-miss-it kiss, which was nearly something far weirder.

THE STRANGER: A lot of the characters in the film are named after bridges in Portland. Are there other real-life people and places from the Pacific Northwest that found their way into the film?

ANGUS MACLANE: Not specifically. I think that the bridges were a nod in the grand tradition of Beverly Cleary naming characters after streets, and Matt Groening with the Northwest streets. But the core idea of the film was inspired by my relationship with Portland. I always see it as my hometown, and being away from it for so long and then coming back was very much like the time dilation [in the film]. I’m feeling like things were changing, and I was staying the same. There was a nostalgia that I think ultimately may not be really helpful, because you can never really go home again.

Was that something you’d been thinking about before this project came along?

Yeah, I’ve always been fascinated about that. I mean I’ve been fortunate to have tremendous success, working in a studio when they had one movie and now we have 26 of them. That’s really fortunate to get to work at a place that has enjoyed that kind of success with a group of really talented people, but there’s always the question of the road not taken

Do you have favorite moments from those early Toy Story films that you worked on?

I enjoyed working on Toy Story 2. It’s really hard to see those movies as films. Working on them, you don’t see them as films. You see them as people and experiences. So when I watch Toy Story 2 and I see the opening with Buzz on the planet, I think, “Oh, well, yeah, we animated that in like two weeks and I had to spend one night sleeping on my couch, and, oh gosh, that shot doesn’t age very well, gosh, I really didn’t know what I was doing there, that’s crap.” It’s like looking at a yearbook.

What was the process of reinventing the character of Buzz Lightyear like?

Well, it’s pretty constant trial and error. You want to have stuff that’s familiar. You want to have stuff that’s emotional. We tried some things out and pushed them too far, and went, “He’s too arrogant here” or “He seems too rough here. He’s too dumb here.” What was useful to us was that ... fundamentally, in all of the movies, Buzz is a character that has a disagreement over the nature of reality. That kind of led us toward this time-dilation thing, separating him from society.

Can I ask about the conversation around the same-sex kiss in the movie, and what those conversations were like and when they occurred?

It was always something we had in the movie, because we wanted to show what Buzz was missing, that Buzz was choosing a life of duty over settling down, as it were. That was part of a montage, and there was some concern about how it played, but ultimately there was support to have it be in the movie. I’m thrilled with what we ended up with. It feels really truthful. With all things, comedy or drama, in every shot you're just trying to have a moment of truth, and so the way that it ended up ended up being the most fluid and truthful. The way we had it before, there was this awkward kind of handshake—it just sat there, and I was like, “We gotta fix this.” So I’m thrilled with what we ended up with. It’s really where I wanted it to be, and it feels really true to me.

When you look at the finished product now, are there moments that you're particularly proud of?

I’m a little close to it now, having finished it. But the scope is pretty big. There’s a lot of characters, everything looks amazing and it all feels like one universe. That was the result of so much work from so many people just to make it feel like a cohesive world. The CG doesn't look flat. It looks very thick and manufactured, and the lighting is beautiful and the cinematography is beautiful. That, to me, is representative of all the people that worked on it applying their greatest talents, and I’m proud to be involved with that.

Did you find yourself in the role of Toy Story’s Andy character, essentially a fan of particular films that you wanted to reference or were inspired by?

Yeah, I just wanted to make my favorite movie again. My favorite movie is Aliens. I saw it when I was 11 on opening night, and it made a big impact on me. The first movie I ever saw was Star Wars in the theater when I was three, and of course it had a big effect. There was a sense that every year there was another exciting genre picture from 1977 onward. I just wanted to create something that had that kind of excitement to it.

When people go to see Lightyear, what do you want them to take away from it?

It’s actually very simple. All I want people to feel is: “That was awesome.” It’s a really simple idea, but you can’t satisfy everyone who has been thinking about this character for so long so the only thing you can do is give them something they didn’t expect and allow them to enjoy themselves for 90 minutes. You can make something that’s awesome, that’s undeniably fun.

This interview has been edited and condensed for clarity. 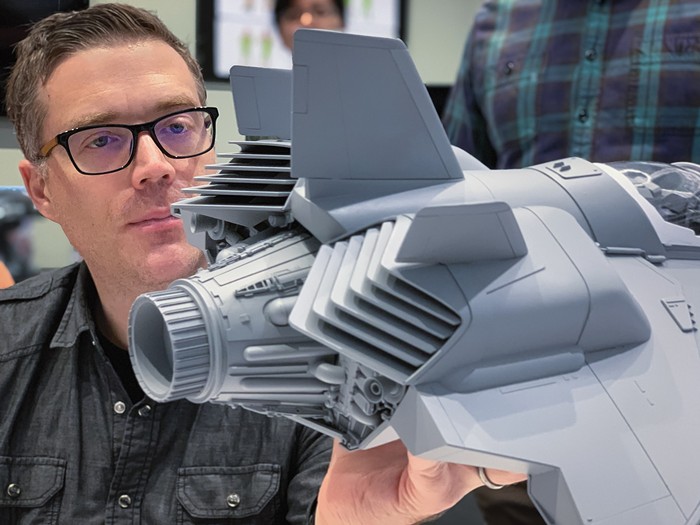