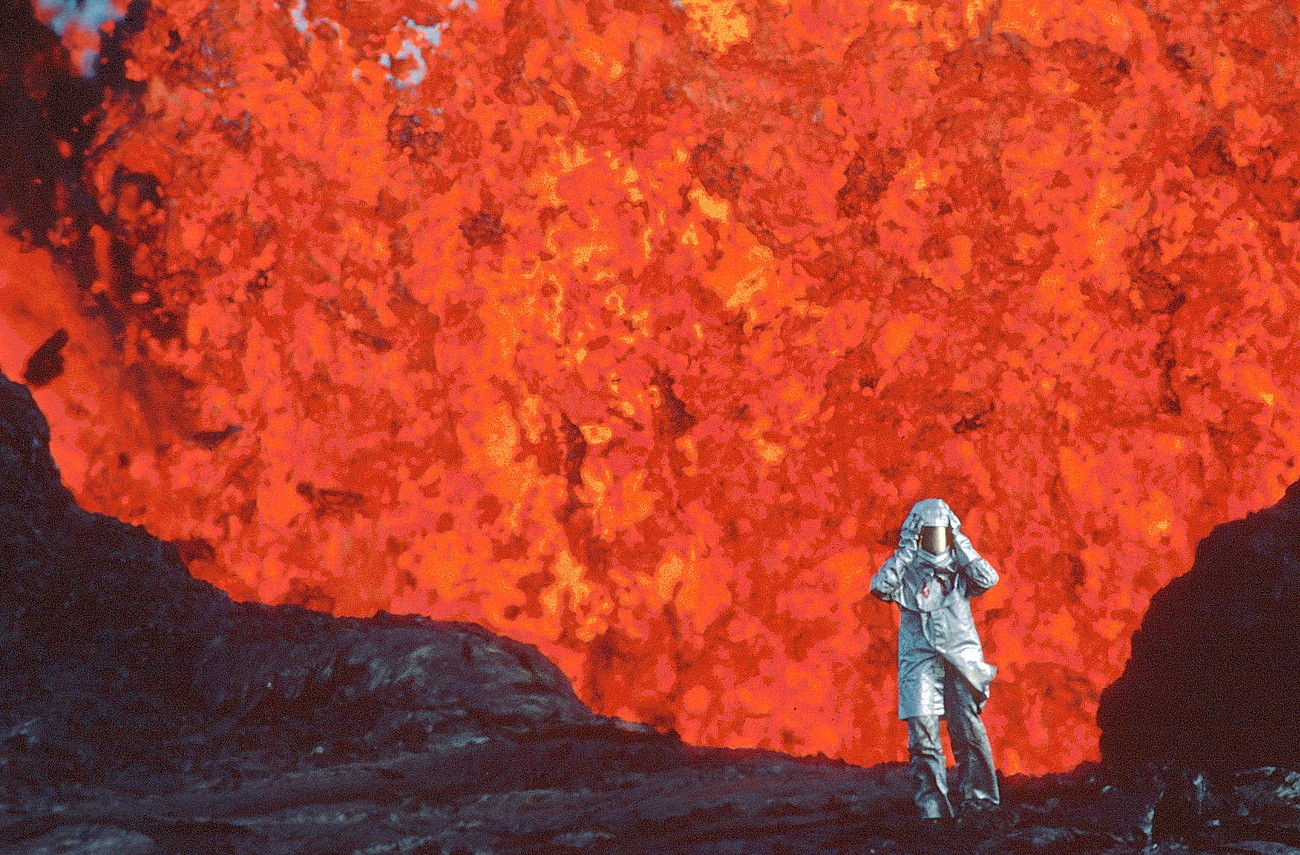 This is a great film to watch on the big screen. Courtesy of SIFF

What is more erotic—figuratively—than a volcano? Pressure churning below the surface. An explosion into the atmosphere. Lava oozing out of crevices in a bright orange river. The Earth spewing molten rock. It's pure geological drama!

Director Sara Dosa plays with this connection between volcanoes and love with her buzzy documentary Fire of Love. The film tells the story of married French volcanologists Katia and Maurice Krafft and their shared passion for exploding rocks. Over 20 years, they dared to get as close as humanly possible to angry volcanoes until they both died side-by-side in a pyroclastic flow during the 1991 Mount Uzen eruption in Japan. The film revels in the mysterious parallels between the love that brought the Kraffts together and the forces that cause volcanoes to blow. Part love story, part nature documentary, Fire of Love is a charming ode to the Kraffts's work and also to love itself.

Katia and Maurice met one another as students at the University of Strasbourg, nerding out over their shared obsession with volcanoes and their mutual hatred for war. After marrying in 1970, the couple forewent any traditional marriage or family structures and instead made their home on the tops of active volcanoes for the next two decades.

Though studying rocks, magma flows, smells, ground tremors, and various life forms fulfilled their curiosity, it didn't pay the bills. Thus, Katia and Maurice funded their exploits by teaching, writing, and speaking on talk shows about volcanic power. The then-new field of volcanology had a fresh, charismatic pair of new faces.

Part of their trailblazing research is preserved in the hours of truly awe-inspiring footage the couple shot throughout their twenty years of volcanic exploits. Fire of Love is composed almost entirely of this footage, most of which was shot by Katia and Maurice during travels to sites like Mount Stromboli in Italy, Nyiragongo in Democratic Republic of the Congo, and Mount St. Helens in Washington.

This footage reveals as much about volcanoes as it does about Maurice and Katia's affection for one another. Katia climbing into a Space Age-y silver suit and sidling up next to a huge plume of smoke and molten rock. Maurice frying an egg on a cooling bit of lava. Shots of the couple posing next to weird rock formations on top of a volcano. Sure, it captured the personality of each mountain the Kraffts found themselves examining, but it also captured their tender-if-restrained affection and shared commitment to understanding this violent vessel of creation.

Part of Fire of Love's appeal—or repulsiveness for some—is its twee nature. For one, the Kraffts are French. For another, it's narrated by the often droll voice of Twee Queen Miranda July. And, crucially, Maurice and Katia often don bright red knit caps and light blue suits which, of course, brings to mind Wes Anderson's highly stylized film, The Life Aquatic. And at times, Maurice and Katia's quirky, academic personalities make the movie feel like an unreleased aside in an Anderson movie.

In any case, I think the French New Wave is a better lens through which to view the film's subjects. The Kraffts's documentation of volcanoes often veered into poetic and impressionistic modes. And Dosa included Maurice and Katia's own reflections on their work in parts that read as dramatic and as existential as the volcanoes themselves. "I prefer an intense and short life to a monotonous, long one," said a narrator playing the voice of Maurice. "A kamikaze existence in the beauty of volcanic things." Fire of Love expertly captures the Kraffts's shared passion, and it serves as an explosive, studied portrait of the couple's love.

Fire of Love is playing at SIFF Uptown through Thursday, July 28.