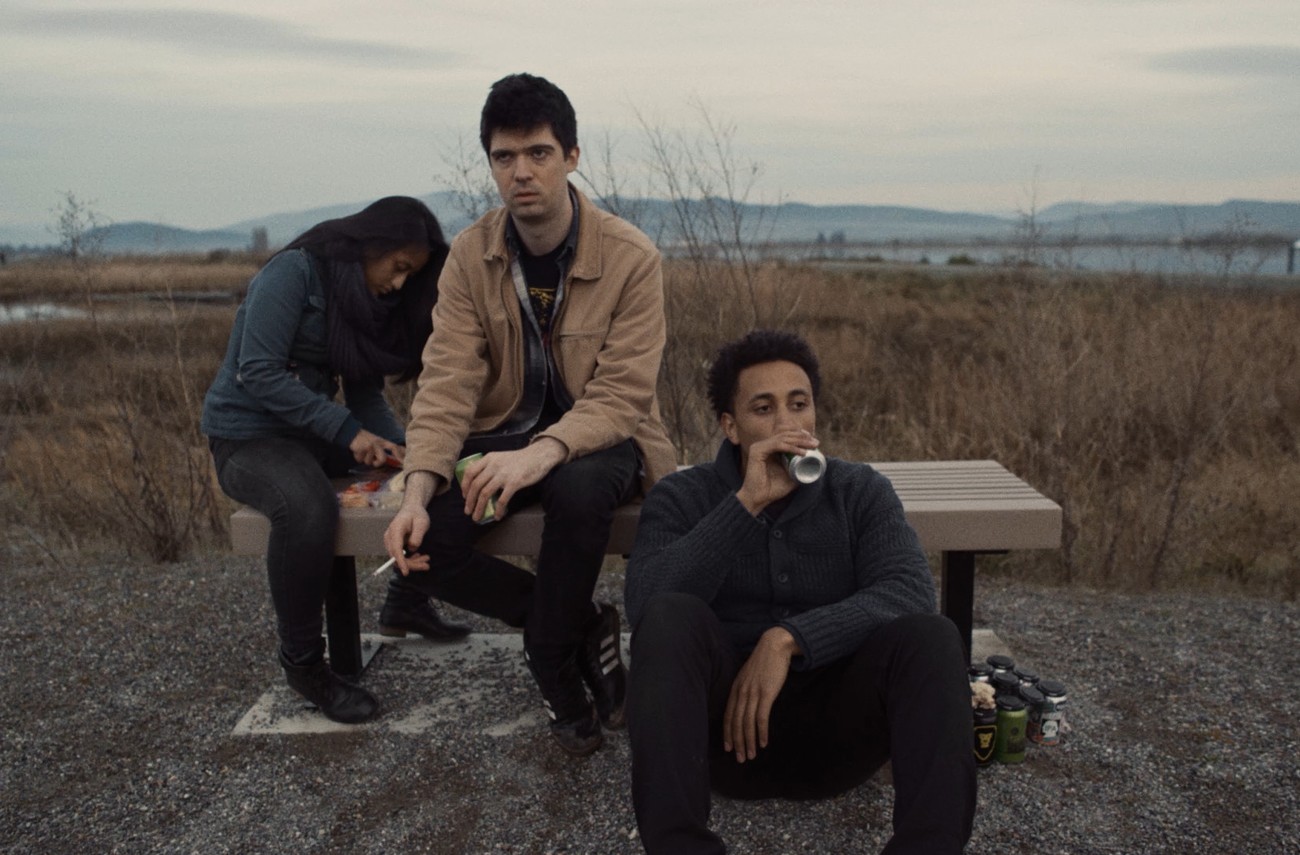 "Slugs. Why'd it have to be slugs?" Alexander Lenzi

If you’re looking for precise answers about Skagit, the experimental horror film set and shot in, you guessed it, Skagit Valley, writer-director Nick Thompson is not going to give them to you.

"The movie is meant to raise more questions than it answers," says Thompson during a phone call ahead of the film’s West Coast premiere. "It’s not meant to be some kind of thing where you only get it if you’re a film buff. Whatever your experience of it is valid."

Some audiences may view this non-answer as a dodge, but Thompson sees personal interpretation as an integral part of the film-watching experience.

"The movie only exists in the mind of the audience or, rather, in the experience of the audience, while you’re watching it there in the moment, with how it's making you feel," Thompson says. "No one has the exact same taste. Not everyone has the same experience with movies or gets the same enjoyment out of them. I was always trying to craft [Skagit] as an experience, like a spell or a trance."

In a literal sense, Thompson’s first feature film is about four young friends who leave Seattle for a weekend getaway in dreary October weather. Early home videos shift into the drive to their destination. That is where the literal ends—the world around them begins to warp and change with no escape in sight. Scenes repeat and cross over one another as the inner disruptions of the characters’ minds start to take hold of the physical plane they inhabit.

It is a trip, one that audiences can take when Skagit premieres as part of the Local Sightings Film Festival, co-presented with the North Bend Film Festival. Thompson and his team will be at the screening on Thursday, September 22 for a post-show Q&A. The event marks the end of a journey that first began when Thompson was just a kid.

Thompson was raised in Washington by filmmaker parents who have made everything from shorts to documentaries. He grew up learning from them and using their gear to make movies of his own. However, with Skagit, he has created something unlike anything he’s ever done before, both in scale and scope.

"I first started thinking about the movie when I was living in New York, almost seven years ago," Thompson says. "I went up for a weekend trip to a friend’s house in New England. I think I was just stoned and writing down notes in my phone of things I thought were funny that people said. It was originally conceived as this much more conventional horror film."

It was a year later, in 2017, that Thompson moved back to Washington and began writing more of a full screenplay that would become Skagit.

"We shot in November of 2018 and I basically moved back to Seattle for the purpose of making [Skagit]. We got going pretty quickly. It was only a three-week principal photography shoot so it was pretty crazy. Then I spent a couple years editing it."

Thompson has said he’s inspired by filmmakers like Ana Lily Amirpour, the mind behind A Girl Walks Home Alone at Night and The Bad Batch, as well as the late Krzysztof Kieślowski, who is perhaps most known for The Double Life of Véronique and his Three Colours trilogy. Thompson is drawn to films that create more evocative experiences that defy simple understandings.

"There is just this sense of magic in the air that’s hanging around the actors," he says. "Without ever clearly stating that something supernatural is going on or what is happening, it is just this feeling that [Kieślowski] creates. A lot of it comes from the nuts and bolts of the colors of the film, the close-ups of people and their bodies, it’s really beautiful."

Bodies are integral to Skagit’s story, too—Thompson highlights the way sexuality and desire are explored, something that isn’t often seen elsewhere.

"Sex remains a taboo in movies and television, in terms of showing it,” he says. “To me, it’s not so much that I’m trying to make a really specific kind of movie and more that it just makes sense for it to be a much larger part of most movies. If you take any kind of movie about adults and made for adults, [sex] is a big part of people’s lives, at least internally. It was an essential part of the film and of the characters, especially at that age.

"If you’re going into a trance or losing your mind or being controlled by this force in some way, how does that twist these emotions or desires?"

Skagit’s production came together in part thanks to the support of the local community who assisted in finding key shooting locations, with some even providing housing and food to the crew as they were working. Their help was appreciated, of course, but Thompson says Washington needs to do more to support local filmmakers.

"We have a pretty measly tax incentive compared with other states, and it's been strangely difficult to get lawmakers to support having a better one or a more substantial one," he says. "Obviously, there are lots of people trying to improve those conditions and that’s great, but it’s tough. I think it’s important, in a general sense, that we really try and support artistically challenging or unique movies here in Washington. I would just love to see more movies that were made by people from here and were taking these artistic risks."

Skagit is the work Thompson set out to make, but, he says, he also expanded his vision as he made discoveries along the way.

"It’s the movie I wanted to make. We never were trying to change it for commercial reasons or anything like that. This was really important to making it satisfying and not feeling like a potential waste of time. It was always intended to have a life of its own and an unpredictability which, I think, is essential to any movie."

Skagit screens online and in-person as part of Local Sightings Film Festival at Northwest Film Forum. Virtual screenings are available September 16-25. An in-person screening, with director Nick Thompson in attendance, is at 7 pm on Thursday, September 22. More information at nwfilmforum.org.

Comments 2
Tags: Film/TV
The Stranger depends on your continuing support to provide articles like this one. In return, we pledge our ongoing commitment to truthful, progressive journalism and serving our community. So if you’re able, please consider a small recurring contribution. Thank you—you are appreciated!
CONTRIBUTE NOW