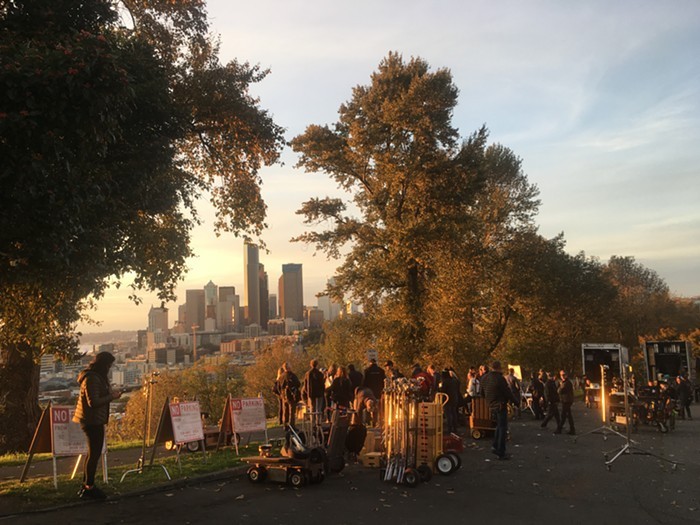 Aaaaaand action! COURTESY OF THE FILM AND MUSIC COALITION

Yesterday, the Seattle City Council voted unanimously to approve Council Member Sara Nelson's bill to establish a Seattle Film Commission. The legislation outlines an 11-member board that will advise the City on policies and programs to better develop the film and television industry here in Seattle, generate more inclusive career pathways into the local industry, as well as push the city's creative-economy priorities.

For the past two decades, Seattle and Washington State have lost out on big-budget Seattle-set productions like 50 Shades of Grey, The Wicker Man, Sonic the Hedgehog, iCarly, and the upcoming The Boys in the Boat because our film incentives are so abysmal. In Hollywood, incentives are the name of the game, and local film and TV industry professionals often have to look for work out of state to stay afloat.

Along with initiatives at the state- and county-level, slowly officials are making Seattle look sexier to productions which could lead to more film job creation and more revenue for local businesses. Also, who knows, maybe more opportunities to run into Nicolas Cage at Caffe Vita.

As I've previously reported, under this new legislation, the Mayor and the city council will each appoint five members to the commission. The eleventh member will be appointed by the committee itself. Each member will represent one faction of the film and TV industry—actors, ad agencies, labor unions, commercial producers or production companies, film schools, film festivals, location managers, etc. The commission will be overseen by the Office of Economic Development which, in turn, oversees the Office of Film + Music as part of its creative-economy strategy.

Overall, the Seattle Film Commission will "advise and assist" the City of Seattle in efforts to ease permitting requirements, increase access to resources and opportunities for underrepresented communities, consult with industry professionals, and market Seattle as a "premier location" for film, TV, video games, and animation.

Earlier on Tuesday, CM Nelson was joined by several members of the Seattle film industry at Ark Lodge Cinemas in Columbia City to rally the city council to pass the legislation. Making an appearance at the event was Emmy-winning local celebrity Tom Skerritt, this year's Mayor's Film Award winner, who has been an advocate for the film community here in Seattle.

"The community wants [the commission] and it's in line with the city's creative economy strategy," CM Nelson told me over the phone before the press conference. "The moment is now."

The commission is something the Seattle film industry has been advocating for the City to create for years. Back in 2019, a group known as the Seattle Film and Music Coalition formed in response to the Durkan administration's fuzzy goals for the Office of Film + Music. Composed of over 2,000 industry professionals, the coalition lobbied to create a Seattle Film Task Force, which in turn advised the City in 2020 on the formation of the Seattle Film Commission.

This effort plugs in with recent moves made by both the state and the county. Earlier this year, the Washington State Legislature raised the state's filmmaking incentive from $3.5 million a year to $15 million, making Washington more competitive with our neighboring states in addition to allocating more funds towards underrepresented communities. And in 2021, King County unveiled the 117,000 square-foot Harbor Island Studios, which has two soundstages and has already hosted Three Busy Debras and Love Is Blind productions. The wheels are certainly churning!

As for next steps, the legislation will go to Mayor Harrell to sign. Once the legislation goes into effect, CM Nelson hopes to impanel the committee as soon as possible so they can get to work on cutting red tape around permitting and advising the city on how to best support the film community.