Read The Stranger’s Review of Singles from 1992 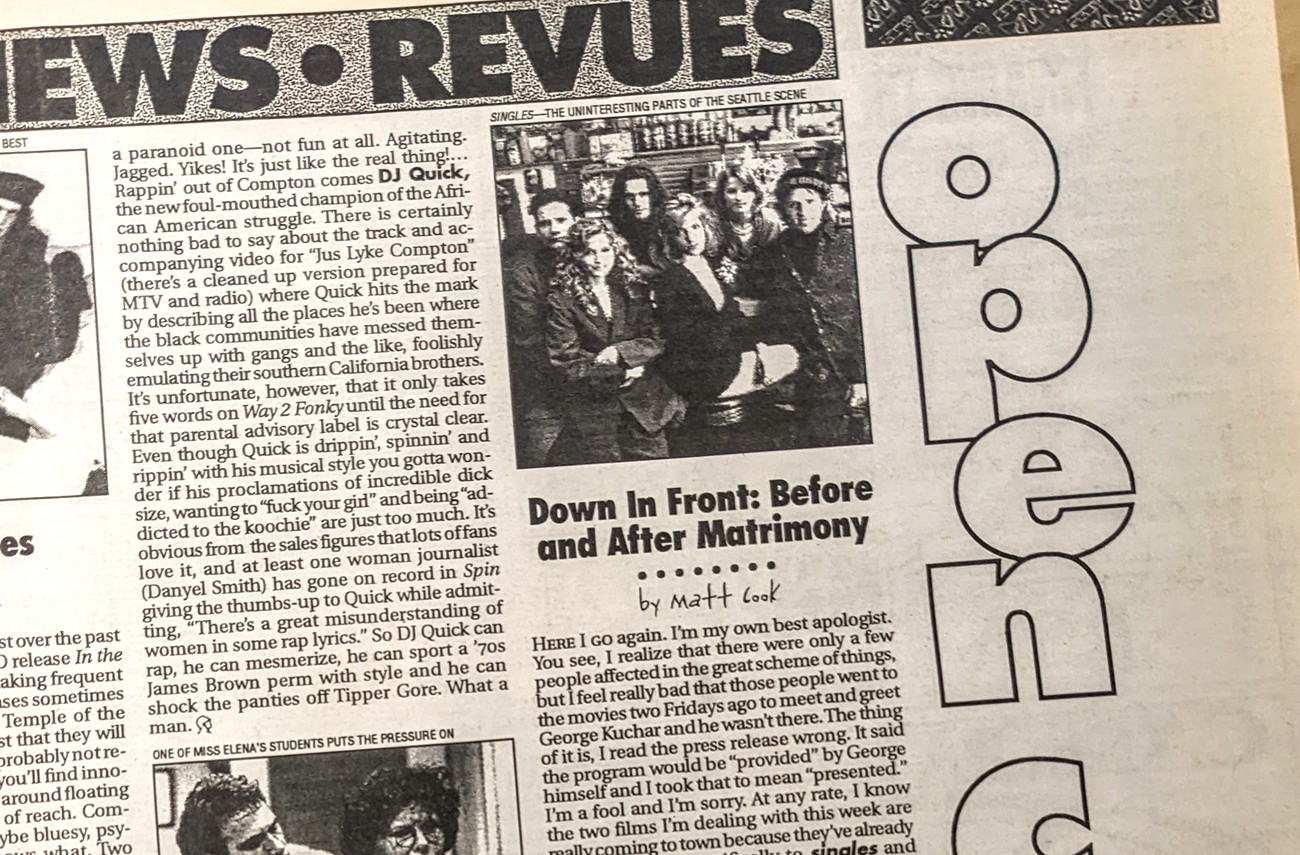 Ah, memories. The OK Hotel, The Rocket, Citizen Dick, and the average rent for a one-bedroom hovering around $541. (I was prepubescent when this movie was released.)

In the episode, the hosts read some of the reviews that were written about the film back in the day. They mentioned some guy named Roger Ebert, who gave it three out of four stars, and also The Stranger's first editor, Matt Cook, who wrote a review of the film in our September 21, 1992 issue.

Of course, after hearing a snippet, I wanted to read the rest of the review. So I braved the archives—the dusty, dusty archives—to dig up the original issue. The article also featured a review of Husbands and Wives—released just as Woody Allen's first round of abuse allegations were coming out—but I cut all that because fuck you, Woody Allen.

Now, singles (note the post-modernly correct lack of capitalization) is a weird bird of a film to review or see in this town. It's so strenuous just trying to pick out all the conveniently dropped names and landmarks that you are left with little energy to pay attention to the plot or characters. It's probably for the best, really, because there's not a whole lot to pay attention to.

I'm not saying that ol' Cameron isn't a fine director, Say Anything was a good enough sign of that. I'm just saying that unfortunately this time he's relying on the general hipness of our little burg and on the star power of a few local musicians/bit actors to make a bundle of dough, and he hasn't bothered to back them up with anything worth remembering. Pleasant is about the only word I can think of to describe the thing.

Supposedly the film is about the topsy-turvy world of dating in the young, PC, rock 'n' roll world of the twenty-somethings. In that regard it's a lot like Slacker. It's another movie depicting my life, showing me my friends and acquaintances, and generally completely removing any chance of the escape from my mundane world I usually enjoy at the pictures. There, I said it, the other keyword I was looking for—mundane. Not only does the film show me my life, but it doesn't even take the care to show me the interesting parts.

I won't bother to explain the plot. Just to say that it's about kids in their twenties dating is enough to write the whole script in your mind. You know, "Should I call? If I call she'll think I'm desperate. If I don't call she'll think I'm not interested. Does the setting of the film I'm in, where all the main characters live in the same apartment building, remind you too much of Melrose Place?" That sort of thing.

Oh don't get me wrong. It is pleasant and inoffensive, and it's a lot of fun deciphering things like how a woman could be in Myrtle Edwards Park one second and at the corner of Post Alley and Virginia the next. There's a good bit of laughs and ol' Eddie Vedder ain't half bad. It just won't stick to your ribs is all. Trust me, the only thing you'll talk about to your friends afterward is how you take the 43 past that one building all the time. I don't see how Crowe thinks this film will carry anywhere but here.

Comments 2
Tags: Film/TV History
The Stranger depends on your continuing support to provide articles like this one. In return, we pledge our ongoing commitment to truthful, progressive journalism and serving our community. So if you’re able, please consider a small recurring contribution. Thank you—you are appreciated!
CONTRIBUTE NOW

Bullet Train is a Screaming Yolanda