In Ethiopian Coffee Ceremonies, Beans Are the Medium for Building Community 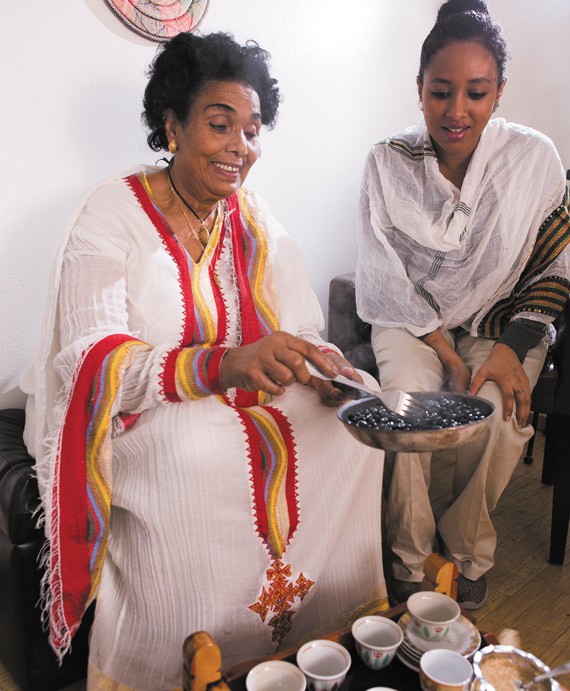 Martha Ayele sits on a low stool in her Pinehurst restaurant, Jebena Cafe (1510 NE 117th St, 365-0757), to roast green coffee beans over a portable electric stove. Using a long, thin metal tool with a hooked end, she stirs the beans, letting them darken and scent the room, the aroma mingling with one coming from a nearby incense burner—another essential part of the Ethiopian coffee ceremony she has just begun.

The ceremony is a daily ritual integral to Ethiopian culture and a stark contrast to the coffee for which Seattle is famous—the kind in which the cup is in your hand and you're out the door faster than you can say, "Double-tall, nonfat." While Starbucks has its caffeinated Disneyland on Capitol Hill, the sizable local Ethiopian population connects to coffee in restaurants around the city in a different way.

The coffee ceremony is just the medium, however; the ritual is all about conversation. Politics, gossip, sports—anything is fair game, says Milen Gebreselassie, owner of Ethiopian restaurant and coffee shop Kaffa Coffee & Wine Bar (8136 Rainier Ave S, 453-3558) in Rainier Valley. It's not about doing things the right way; it's about relaxing and spending time with family and friends. As Ayele puts it, the ceremony "is about sharing our love, our lives."

And there is plenty of time in which to share—even a sped-up version takes the better part of an hour, and often the full ceremony can be two hours long. Unlike your morning cup of drip, there's nothing hurried about it—even the roasting process is slow. "Where are you trying to go?" Ayele says her mother would ask her if she tried to rush instead of waiting patiently for evenly darkened beans. Toward the end of the roasting, she adds a little bit of cardamom and clove.

Ayele, along with her brother, Mesfin, and their mother, runs a small market next door to the restaurant where she sells all the supplies necessary for coffee ceremonies, including the green beans: Ethiopian Sidamo sourced through Greenwood's Atlas Coffee Importers. Gebreselassie gets her beans for ceremonies from a similar market in South Seattle (though she uses an Ethiopian bean from Caffe Vita at her coffee shop). Ayele beams with pride as she talks about Ethiopia's most famous export—all organic and grown under the no-GMO law there.

Among the supplies at Ayele's market is the jebena (coffeepot) for which the Ayeles named their restaurant. It's tall and skinny, with the shadowy lankiness of a black cat. (A large relief of a jebena frames the bar in the restaurant.) "It was nobody's name, nobody's religion, nobody's country," Mesfin explains about why he chose the name.

At Kaffa, Gebreselassie brews the first cup of the ceremony, called abol, right in the jebena using a thick grind (traditionally done by mortar and pestle) and a little bit of cold and then hot water. The method, she explains, keeps the grinds in the bottom of the pot when she pours it into the tiny cups (cini) traditionally used for sipping coffee. The cups sit on a carved wooden tray called a rekbot, about a foot off the ground. The coffee is poured through the long, thin spout of the jebena, cooling as it splashes down into the cups.

Ethiopian coffee is served without milk, and sugar is supplied on the side. The first cup is the strongest—the first two, really, as tradition dictates drinking two cups of this first brew, which is dark and fresh. Later, at Jebena, Mesfin explains that machines and Western methods squeeze the coffee, while Ethiopian brewing extracts the flavor gently, so that you fully taste the beans.

During the ceremony, participants do only three things: sip coffee, eat snacks, and make conversation. At Kaffa, Gebreselassie tells me that she was a chemist back in Ethiopia, arriving in the United States four years ago with the hopes of furthering her schooling. Things changed, though, and now she says, "I make coffee." She runs the restaurant with her boyfriend, who works as a scientist as well, and with his mother.

She doesn't even make coffee as often as she wishes—or at least not in the ceremonial fashion that was a part of her daily life in Ethiopia. The ceremonies she does here are rushed and happen only once a week—squeezed into the busy life of owning a small business. She relights the incense before making the second brew of the ceremony, which brings a neighboring business owner frantically rushing in to make sure all the smoke isn't a sign of fire. Gebreselassie assures her everything is fine and then returns to the ceremony with a shrug, as if to say, "This is what happens here."

Unlike Gebreselassie, the Ayeles perform the coffee ceremony daily in Seattle, usually fitting it into a slow period at the restaurant. But, Ayele admits, things are not exactly the same. That day, at Jebena, she performed the ceremony wearing a pink-striped sweatshirt and dark track pants, very different from the traditional white cotton flowing garments.

In the second round, called tona, the same grounds are used, so the coffee is a little weaker, but the conversation only gets stronger. Ayele exclaims her love for Seattle. She says she has spent more of her life out of Ethiopia than in it—first spending a few years in Greece, then a few decades in Vancouver, and finally coming to Seattle 10 years ago when Mesfin, the youngest of her five younger siblings, moved here. Five years ago, she opened Jebena with big plans to offer coffee-roasting classes, along with the ceremony.

Her health had other plans: In 2012, she was diagnosed with a brain tumor. Mesfin quit his job at an industrial lift company and came to help run the restaurant. The family stretched and strained to keep it afloat as Ayele underwent surgeries and treatments. She alternates between praising God and Seattle, saying if she had stayed in Ethiopia, she would "have been long dead and forgotten." Instead, she walks through the restaurant greeting diners—her customer-service talent honed during a career as a waitress—looking (and acting) much better than anyone just a month out from her most recent brain surgery could be expected to.

Finally, Ayele pours the bereka, or third brew—weaker still, as it uses the same grounds. Three years ago, doctors gave her five months to live. Today she pours coffee and serves food with the enthusiasm and energy of a teenager. She offers coffee to any customers who happen to be in the restaurant at the time she performs the ceremony.

Both Gebreselassie and Ayele also perform the ceremony for customers by request—no previous knowledge necessary. Gebreselassie requests a day or two's notice and charges $25 for up to six people. Ayele asks for at least four hours' notice and charges $20 for "about six people," but also mentions they won't do it when they're busy—meaning any time around mealtime, as Jebena also serves some of the best Ethiopian food in town.

This article appeared in the fall 2015 issue of The Sauce.

Tags: Food & Drink Pullout The Sauce
The Stranger depends on your continuing support to provide articles like this one. In return, we pledge our ongoing commitment to truthful, progressive journalism and serving our community. So if you’re able, please consider a small recurring contribution. Thank you—you are appreciated!
CONTRIBUTE NOW

Off Alley Is Supremely Good. It Will Remind You What It Means to Love a City