Viet-Cajun Cuisine Is Creeping Up from the Gulf Coast—and You Can Find It in Seattle, Kind Of 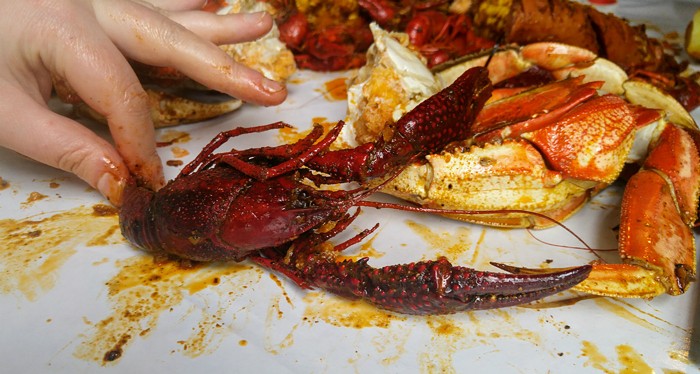 First of all, are you guys watching Ugly Delicious on Netflix? David Chang’s new food documentary series, where he travels around the world and investigates different incarnations of fried chicken or dumplings or pizza or whatever? If you like eating food and haven’t seen this beautiful program, consider yourself officially delinquent.

Anyway. In Episode 4, Chang travels to Houston and New Orleans to meet Vietnamese emigrants who run Cajun restaurants—and add Vietnamese flavors to dishes featuring the same foods they have in the Mekong Delta, like pork and shellfish. At Houston’s Underbelly, a whole hog is Texas-barbecued and basted with nước chấm (Vietnamese fish sauce), and several places that are featured offer po’boy/bánh mì amalgamations. Another fave is your standard Southern crawfish boil infused with Vietnamese aromatics—lemongrass, ginger, bird’s eye chilis. New Orleans and Vietnam both have the French connection, of course, which leads to treasures like Dong Phuong Bakery’s croissant-like Vietnamese king cake.

Granted, the Viet-Cajun trend has been churning and growing for a few years now, but it’s been getting a big push lately. VICE called it “the American food of the future” in February, and Chef Trong Nguyen of Houston’s Crawfish & Noodles scored a 2018 James Beard Award nomination that same month.

I was immediately envious, hungry, and curious. We have a huge Vietnamese community in Seattle too, so… do we have Viet-Cajun food, too?

Turns out, yeah. Barely. Not nearly the quantity that Houston possesses, and we’ve lost about half of the few spots we had—RIP, Bayou on First—but Seattle does have a few places that serve Viet-Cajun cuisine. I tracked down four and of these, tried out two.

Crawfish King in the International District has been around for almost a decade, on 8th and Lane, up by the freeway. It’s been carefully decorated to look like a Sea Galley, and their main thing is Cajun-style seafood boils. They offer all the usual shellfish characters—lobster, a few species of crab, mussels, clams, headless and headful shrimp, others—and you can pick one of their preordained shellfish combos or just assemble your own and pay per pound. They sauce it all up and dump it on the table (on a plastic tablecloth) and it’s a giant marvelous mess and will get in your hair and behind your glasses. Of their five sauces, only the super-fragrant King’s Sauce (according to the description, “Asian zing”) is Viet-inspired, with bright red chili oil, curry spice, and massive chunks of garlic.

The best deal seems to be the crawfish ($11.99/lb.), which are real big suckers, and the Dungeness legs ($31.99/lb.), also colossal. We loved the King’s Sauce so much that when the crawfish were all eaten, we used the empty (enormous) heads as spoons and whenever the server wasn’t looking, slurped the chunky garlic-chili King’s Sauce like it was soup. I want to live inside of the little paper King Sauce bucket.
Crawfish King’s menu has a bunch of Asian items, like coconut rice, roti, soju, sake, and such, and a panoply of cute macaron flavors (including durian!), available in both regular and ice-cream-sandwich format, but it’s is free of any outright Vietnamese-and-Cajun fusion dishes. They occasionally offer crawfish bánh mì and Cajun Phở as specials, however, and plan to whip out some Viet-Cajun fusion foodstuffs for the Night Market in September.

Possibly the best part? If you spend more than $100, you get to spin a ‘Wheel of Seafood Prizes’—we won a pound of crawfish, redeemable on our next visit! We were dazzled by every single thing about this place and will probably be back for lunch, like, tomorrow.

Crazy Pho Cajun used to have a location in the I.D., but now the only one is in Federal Way. This menu is the most exciting in the local chapter of the Viet-Cajun diaspora, in that it lists a handful of actual fusion dishes. I had to try it. Luckily, they’re on Eat24.

The Cajun crawfish bombs—minced pork and crawfish, wrapped in a wonton wrapper and deep-fried (five pieces, $5.95)—are good in that everything wrapped in a wonton wrapper and deep-fried is never not good. Cajun phở (small, $8.95/large, $9.95) could be regular seafood phở save for teeny crawfish niblets that’re half the size of Crawfish King’s and thrice as intense, in an agreeable bouillabaisse way. The Cajun bún ($10.55) was the standout, thanks to those same powerful li’l crawdad bites—the sweet/sour nước chấm (dipping sauce) balances out the shellfish-iness better than in the phở, where the ‘dads just stew in their own intensity indefinitely. Both the phở and bún have shrimp and Andouille sausage, too, the latter of which is spicy and correct and will, I think, impress any local Southerners.

They don’t have a po’ boy bánh mì on the menu and my soul required one after reading about them, so I ordered a Cajun link sausage po’boy ($7.95+) and asked in the notes if they’d substitute bánh mì fixins for po’boy fixins… AND THEY FUCKING DID IT. I was so thrilled to see this Voltron sandwich that I didn’t care if it was any good, but honestly, it was a solid bánh mì. The link sausage’s less spicy than the Andouille, still pleasant, a bit smoky. Good French roll, good pickle on the veg. Would try this harebrained scheme again.

In White Center, Crawfish House also serves Cajun-style seafood boils with one Asian sauce available. I didn’t visit, but if you’re down for a crawfish boil and don’t need it to be exceedingly Vietnamese, you could try this one out.

Then, there’s The Cajun Crawfish on MLK, which can’t make up their mind about whether they do Viet-Cajun. The menu reads as straight-up Cajun and the person I spoke to on the phone didn’t know what I was talking about when I asked if they had Viet-Cajun items, but it says they do it on their website.
It’s not clear why Viet-Cajun isn’t blowing up in Seattle, where we certainly appreciate both seafood and Vietnamese cuisine, and it deserves to, because it’s not just a gimmick; it’s both weird and worthy. Hopefully, due to the national attention it’s getting lately, interest will ramp up and we won’t lose any more of these spots. Possibly even gain a couple. Fingers crossed.

Our 20 Favorite Coffee Shops in Seattle