The Last Word: A New Column about Cocktails! 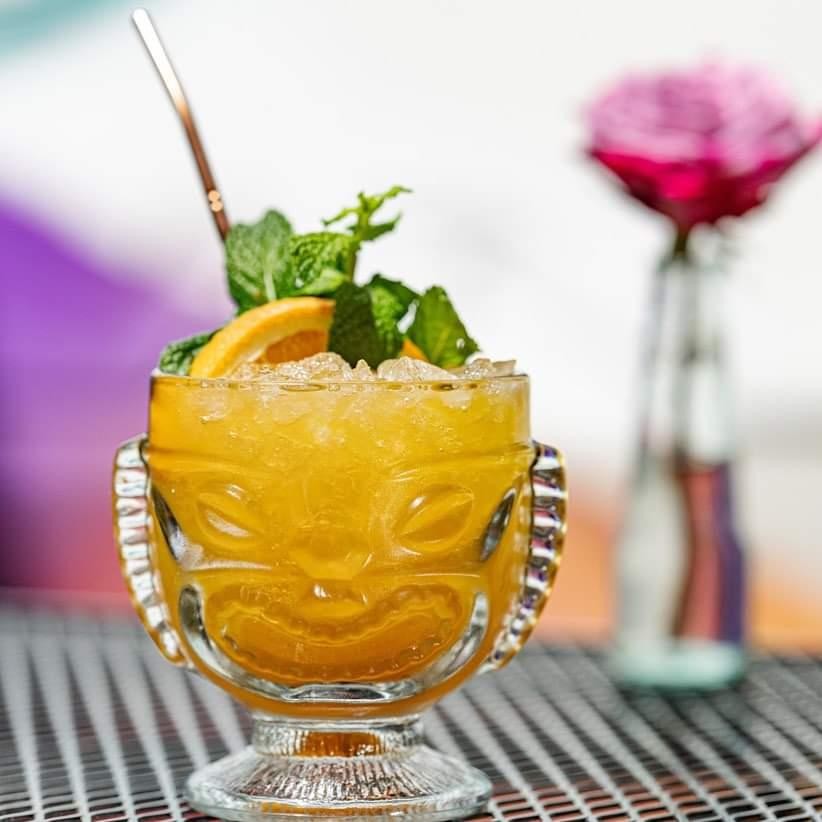 The East Compton Clovers, named for the winning cheer squad in Bring It On, comprises Doctor Bird Jamaican rum, Stiggins’ pineapple rum, a fruity amaro, apple-curry syrup, and sour OJ, and it’s garnished with orange and mint. A rummy cornucopia of fruits. Photo Courtesy of Baker's

Welcome to The Last Word, my new monthly column about craft cocktails, which I like! I’m here to celebrate my cocktail faves, both alcoholic and non-, to explore their histories and their components, and to lure you to Seattle’s dive bars and cocktail lounges that deserve your attention. The column name is a nod to local bartending legend Murray Stenson, who’s credited with rediscovering the Prohibition-era cocktail of the same name and repopularizing it—first at Seattle's Zig Zag Cafe in 2002, after which it took off across the world. Also because words.

So hey, if I didn’t sing its praises enough when I wrote about its baby-sister bar, Bar Miriam, back in March, lemme do so now: Baker’s is my number-one best spot for cocktails in the city, without rival. Everything they serve is a glimmering jewel, and you really can’t go wrong with their quarterly menu, whatever’s on it, food or drink. The cocktails are all quite literally breathtaking and will make you gasp when they arrive, just from the sheer technical skill evidenced in each. I actually went out of my way to try to inaugurate this column with a drink from a bar that is not Baker’s or Bar Miriam, since I already wrote about that shit, and I went through FOUR contenders I didn’t like nearly as much as the current cocktail list at Baker’s. So fuckit, you’re gonna hear more about Baker’s.

A note: You might need to watch the classic teen cheerleading movie Bring It On (2000), starring Gabrielle Union and Kirsten Dunst, to fully grok what’s going on in this menu. (Owner Brian Smith adores a themed cocktail list.) If you haven’t seen it, a quick primer + giant spoiler alert: it’s about high school cheerleaders duking it out to go to nationals, and the East Compton Clovers are ultimately the winning team in the film’s grand cheer-competition finale. Sorry for spoiling a 22-year-old movie.

Like in the film, the East Compton Clovers drink also rises above its cocktail cohorts. They’re all marvelous, of course, but boy, this one. What a little star.

The squad at Baker’s likes to blend its rums, and the ECC is a shining example: It’s got Doctor Bird Jamaican Rum AND Plantation Stiggins' Fancy Pineapple Rum—themselves both blended rums, and very fruit-forward ones, which are then blended with each other—plus a nutty-apricotty note from Brucato’s “Orchards” Amaro. (The best of the three Brucatos, FYI.) To that is added sour orange juice and housemade apple-curry syrup. Finally, it’s topped with an orange slice and a sprig of mint, as all rum drinks are mandated to be.

Bar manager Veronica Riffo says she went a little astray from her usual method when cooking up the recipe for the East Compton Clovers. “When conceptualizing menu cocktails, we usually follow a template for each style of cocktail, i.e., gin sour, tropical, stirred, etc.,” she said. “But this time, I was inspired by a curry-apple syrup I made for a cocktail special. Chef [Cody Westerfield, formerly of Lecosho] had curry on the menu, and I wanted to reflect the ingredients in a drinkable form. From there, I thought about what might pair well with curry: hence pineapple, orange, and more spice. So, it then made sense to place this cocktail in the tropical category!”

Dunno about you, but I always imagine that frooty rum drinks will be heavy and syrupy like a can of peaches, but this one couldn’t be lighter, thanks to the brightness quotient of the citric acid and pineapple, aforementioned, plus the sparkle of the spices. The effect here is super tropical and rummy, but it’s not a sugar bomb, because it’s not a tiki drink, despite containing some of the usual characteristics. It’s at once luscious and tart.

“Yeah, I started with a juicy, spiced, layered cocktail,” Veronica says. “To balance it out, I continued with the orange theme, but I used an acid-adjusted sour orange juice—by adding citric acid to regular orange juice—to give it zing.”

She also points out that the orange of the cocktail and the green garnish match the Clovers’ uniform colors in the movie. Brilliant.

I keep imagining there’s orgeat in there too, probably thanks to the delicate nature of the fruit sugars here combined with the walnut flavor in the amaro, and there’s not! But yeah, kind of an almondine effect, somehow. Just a shade. And don’t be scared of the word curry in this recipe, by the way—it’s more of a ginger-cinnamon-clove profile, maybe some saffron too, harmoniously refreshing and warm.

You know, like summer is. It’s like drinking a Juicy Fruit commercial. The ECC’s a real beach blanket bingo of a cocktail. Also, you get a fun, spoony julep straw to sip it with, which is one of my favorite things about drinking at Baker’s! That and the impeccable glassware. These guys always rep hard with the glassware.

Although this bar is secreted away in the far reaches of Sunset Hill, out in neighborhoody west Ballard, the word’s been out on Baker’s—even a Tuesday night last week was chockablock, and they don’t take reservations. It’s worth it to plan ahead, though, and bake in a little extra waiting time. If you can score a seat on the lush and verdant patio, it’s the ultimate way to enjoy a hella summery East Compton Clovers.

And seriously, you’re required to re-watch Bring It On before you go!

The Last Word: A New Column about Cocktails!

Where to Get Food & Drink Specials for Pride 2022 in Seattle

This Week in Seattle Food News: A Galician Tapas Bar Opens, A Beer Bar/Plant Shop Arrives, and Ludi's Is Coming Back

Is This the Best Fried Chicken in Seattle?