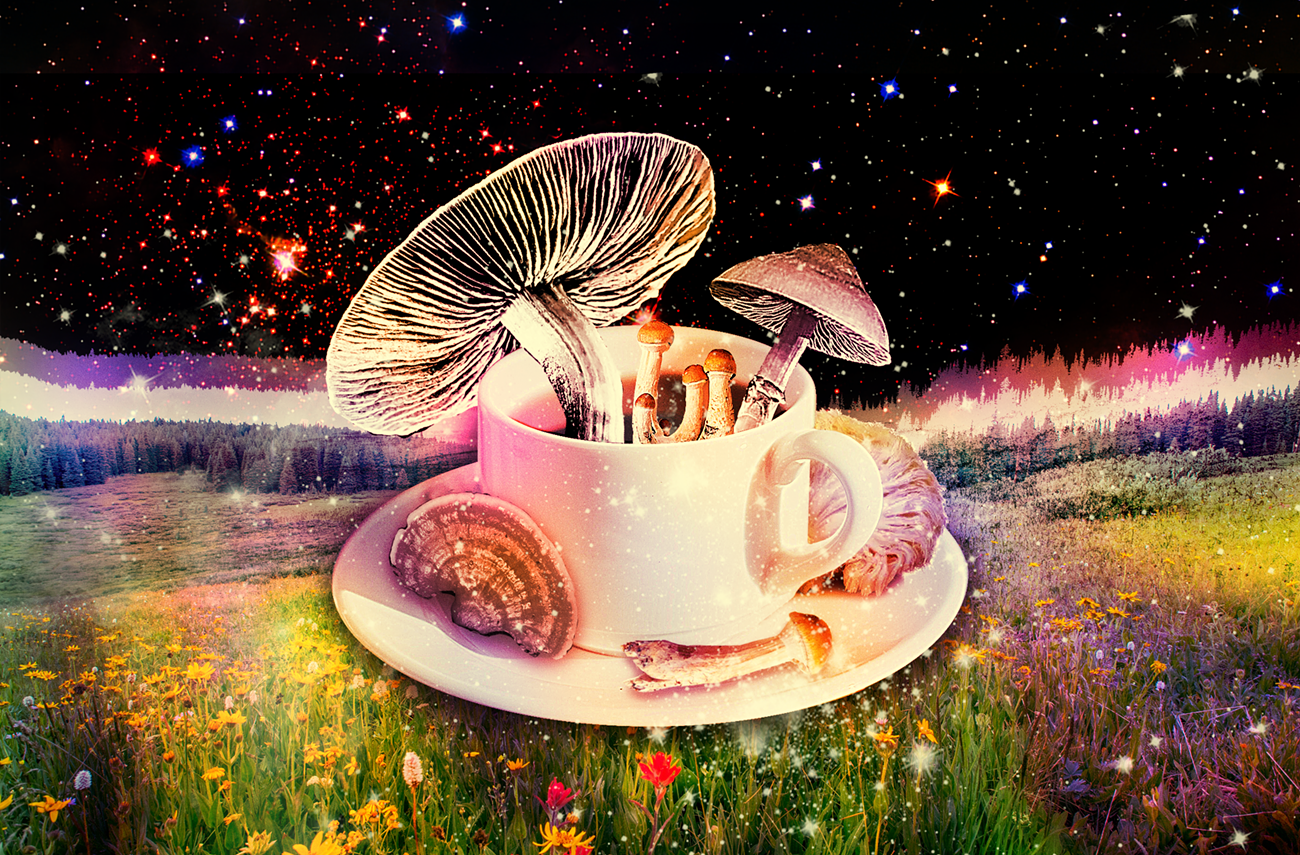 Your results may vary. CROUTON

On a recent cold and wet weekday morning, I decided to do my day's writing on the sheltered patio of a local cafe. Tea in hand, I opened my laptop and settled into work. But instead of writing, my mind began to pleasantly wander. I thoughtfully considered the crisp chill of the air, pondered the mossy smell from the much-needed rain, and studied the people out on the patio with me. I stared into the gray sky and felt something I don’t often feel in the middle of a weekday—a sense of deep gratitude.

I can’t solely attribute my good mood to simply waking up on the right side of the bed that morning. Just an hour prior, I had slurped down a cup of Wunderground Coffee’s new, experimental, and limited-edition psilocybin-infused coffee called Mush Lovers Unite. Each serving—roughly two tablespoons—is only a microdose (100 mg), so there’s no danger of experiencing ego death on a Tuesday morning. Rather, whenever I drink a cup, I feel open, energized, curious—like I’m going to have a great day. Exactly how I’d like to feel after downing a cup of joe.

In honor of National Mushroom Day on October 15, Capitol Hill-based adaptogenic mushroom coffee purveyor Wunderground Coffee launched a free non-fungible token (NFT) called a “Mushie Spore,” which gives owners access to exclusive products and experiences—including being entered into a giveaway where 10 so-called “Mush Lovers” will win a limited-edition bag of this psilocybin microdose-infused coffee. Undergirding the project is a desire to shake up the coffee industry and address the mental health crisis this country faces as we come out of the pandemic.

“As a country, we witnessed OxyContin being approved by the FDA to help with pain and look at the insanity that created,” Wunderground founder Jody Hall told me over the phone recently. “Meanwhile, we have something like psilocybin mushrooms that grow during certain times of the year and have all this benefit. So we’re making a stand. We think [psilocybin] should be decriminalized, it should be used for therapeutic treatments and, potentially, recreationally down the road.”

Hall opened Wunderground Coffee in her old Cupcake Royale space on Capitol Hill earlier this year. Serving as both a cafe and a retail space, Wunderground allows customers to choose coffees that have different distinct blends of organic adaptogenic mushrooms that help alleviate stress and anxiety. Lion’s mane, cordyceps, reishi, and chaga are paired with medium roasts and teas for different desired outcomes—more focus, better gut health, help with sleep. And it doesn’t taste like mushrooms, if you were wondering; the earthiest thing in their Brainchild latte was the oat milk. When I stopped by for a cup recently, I felt less affected by the jitteriness of the caffeine but just as concentrated.

This limited edition shroom coffee is naturally the next step in better connecting humans with the sporific power of mushrooms. As Hall tells me, the team at Wunderground is “excited about what we know about psilocybin and its ability to help us as a country.” They've been imbibing the shroom coffee in shifts, Hall said, and commented that it's helped everyone with their focus. Plant medicines like psychedelic mushrooms have tons of research supporting their effective use against depression, addiction, and post-traumatic stress disorder. Access to psilocybin could really be a game-changer for those struggling with their mental health.

Mush Lovers Unite was made in collaboration with Stumptown Coffee founder Duane Sorenson’s new coffee venture, Puff Coffee, in Portland. Using psilocybin from an unnamed donor, Puff roasted and infused the coffee in a trade-secret process that removes chitin—a chemical compound that makes you nauseous—from the shrooms. And since both Wunderground and Puff Coffee are based in Seattle and Portland respectively, the press materials point to the fact that both cities have decriminalized entheogens (aka psychedelics) as the reason they feel confident in this shroom experiment. While Oregon voters decriminalized all drugs in 2021, it’s a bit more complicated for Seattle.

Because only the state has the authority to decriminalize drugs, the Seattle City Council passed a resolution last year urging the Seattle Police Department to make entheogens their lowest priority. (A bill based on Oregon’s regulating the use of psychedelic mushrooms in health settings failed in the Washington State Legislature earlier this year.) Growing or possessing psychedelics when you’re in trouble for something else is still off-limits, but the King County Prosecuting Attorney’s Office told my colleague Rich Smith last year that arresting someone solely for possession of these substances is “quite rare.”

Thus, the Mush Lovers Unite prize is in a legal gray area, however, neither Wunderground nor Puff Coffee are selling the bags of shroom coffee—the NFT is free—and they plan to have a third-party distribute the bags by hand only in Seattle and Portland. But that edginess is kind of the point. “It’s more an act of civil disobedience,” Hall told me over the phone.

When I had my first cup of the magic brew, I was a little skeptical that this was just another way to bio-hack your productivity in a, like, Joe Rogan-y way. But the coffee swiftly proved me wrong. Working is the last thing I want to do after drinking this microdose.

With Mush Lovers Unite, I find myself joyfully distracted, and feel pulled more to nature than to my job, like a weight I didn't even know was there got lifted off my chest. I don’t feel high, but the subtle shift in perception is notable and burns off after a couple of hours, leaving me feeling less anxious. Like so many, I've really struggled with anxiety, depression, and burnout after nearly three years of covering the pandemic, protests, and general societal upheaval. Having another recourse to connect me with myself—even in tiny doses—is a genuinely wonderful experience that I wish everyone to have.

The chance to sign up for this free "Mushie Spore" NFT ends on October 31 with the winner announced on Wunderground's Twitter on November 4. The coffee company plans to announce a paid NFT with greater access to community and experiences sometime in the future, with 10 percent of profits going to mental health groups working on the use of psilocybin therapy treatments. (No Mush Lovers Unite will be part of this paid offering, unfortunately).

Hall told me that Wunderground will keep advocating for expanded paths to legal psilocybin therapies and the company plans to do future collaborative psilocybin-infused coffee drops in the future. This is only just the beginning.

"We will continue to push the narrative forward," she told me. "And do so in the name of access to mental health therapies that have potential to help so many."

Where to Eat for Valentine's Day 2023 in Seattle

Cozy (Non-Boozy) Holiday Beverages to Try in Seattle This Season