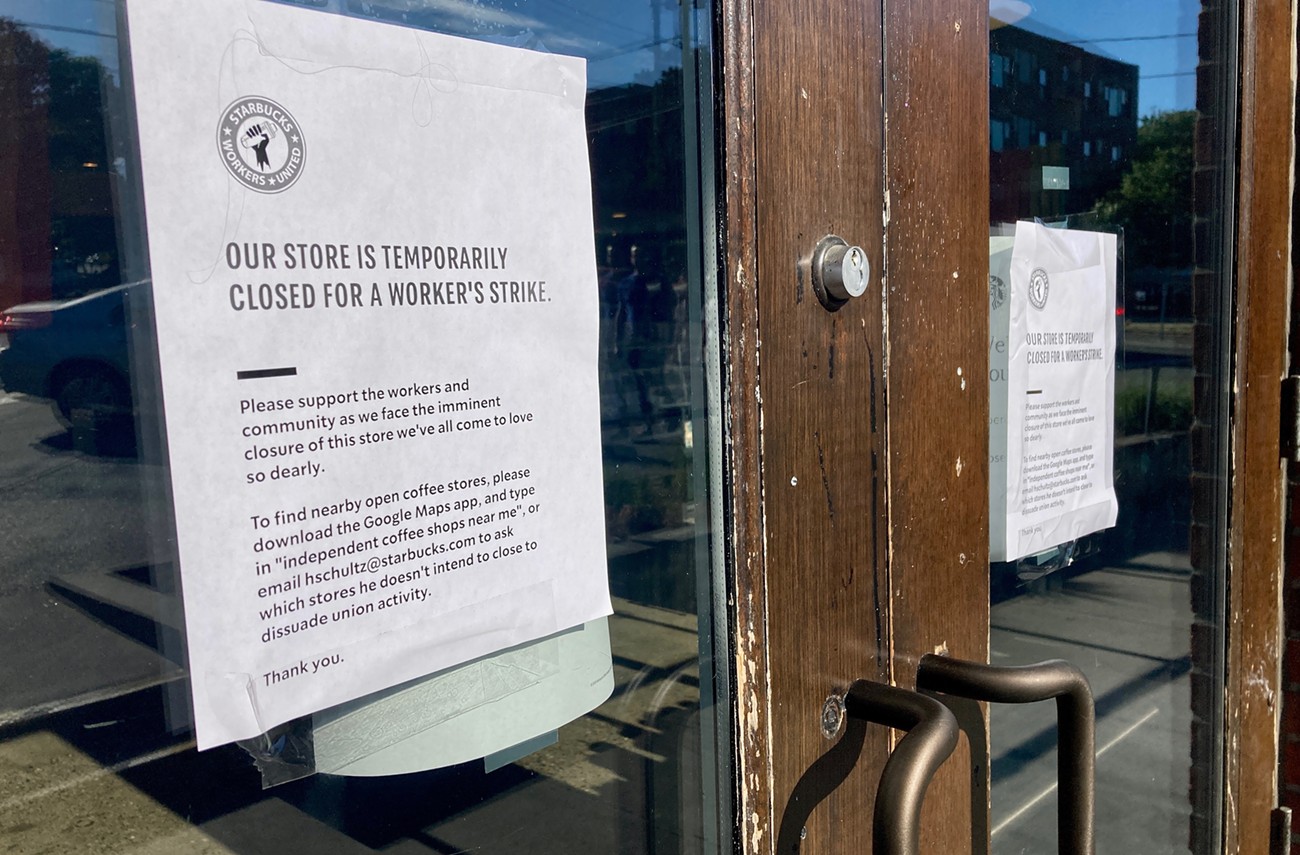 Folks, this week we’ve got a particularly inspiring batch of blurbs: an A-1 do-gooder job, a throwback banger, and more. This is simply The Good Stuff. Not to mention, we are in the middle of Sweet-Ass Summer in Seattle. Fire it up!

Patagonia pays out $54,600+ to workers: The Seattle Office of Labor Standards found that Patagonia violated Seattle’s Secure Scheduling law by not posting work schedules at least two weeks in advance. Now Patagonia is paying over $54,000 to the 95 workers impacted between May 2019 and April 2022. To their credit, Patagonia did not contest the allegation. For this, I would like to extend one “good job” to Great Pacific Ironworks, DBA Patagonia. And I would like to extend 5,614,759.79 “good jobs” to the Seattle Office of Labor Standards, one for each dollar they’ve returned to 5,652 workers whose lives have been materially improved by the enforcement of this law.

Starbucks workers protest over closing stores: Howie really Howied it up this week, running more delay tactics and closing 16 stores over “safety concerns” and hoping nobody would notice that some were organizing against his BS. He must think we are all so dumb. Well, our Boys and Girls and Nonbinary Queens in Green didn’t take this sitting down. Starbucks Workers United swiftly filed an NLRB labor complaint, and workers at the 505 Union store went on strike Thursday. They were even joined by the VZW Union:

Out here with @SeattleSBWU workers at 505 Union as they’re protesting their store getting shut down. It’s blatant union-busting! @SBWorkersUnited @VentiSolidarity pic.twitter.com/jyRE5U3k96

More strikes this weekend: In response to all this union busting, workers will strike at three locations this weekend. A picket at the "Gaybucks" on E. Olive Way is forming now. Another picket will happen downtown from 1 to 5 pm at 425 Pike St. And another takes place outside the Capitol Hill roastery on Sunday from 11 am to 3 pm.

Want to help out? Donate to their relief fund.

Barrio workers walk out: On Wednesday, Capitol Hill Seattle reported that workers at Barrio, owned by Heavy Restaurant Group, staged a walkout last week. Then they got fired. Boo the outcome, but cheer the bravery. But is there more to the story? These workers were said to be simply pushing for a more equitable split of tips between front and back of house. It appears from their menu that management adds a 20% surcharge on every check that goes toward “wages, benefits, commissions and revenue share.” So, in other words: a charge that inattentive customers probably assume is all tip, but probably goes to top off base wages and benefits, too. This is one to keep an eye on.

Happy belated Bastille Day! How did you celebrate? Oh, by continuing to be cucked by the powerful elites, in the way the 18th Century French simply would not have? That’s right, wealth inequality in this country surpassed pre-French Revolution levels at the beginning of this pandemic. Grow up and build a guillotine!

Chris Smalls on the pod: Looking for a new listen? Amazon Labor Union President Chris Smalls appeared on the podcast Lever Time, which is hosted by journalist and Don’t Look Up co-writer David Sirota. Check it out here on Spotify and here on Apple Podcasts.

Politicolol: Politico ran an article trying to convince us that pay raises are actually bad for us, and the internet had a pretty good time laughing at them. Feel free to join in!

City Council pushes Homegrown to recognize union: On June 3, a majority of workers for the company Homegrown (which operates 10 cafes in town) signed a petition in support of a union. Then, after crickets from management, they picketed and demonstrated for over a month. Now, as The Stand reported this week, even the City Council has chimed in: recognize this union! Do it, Homegrown!

ATL Amazon employees walk out: Upset with their working conditions, seeking $3/hour pay raises and more time off, Amazon employees in Atlanta decided to walk it out…to the song “Walk It Out.” However, DJ Unk has not yet made a statement. Unk, the eyes of the world are upon you!

NEW: Amazon workers in Atlanta walked out today to demand a $3/hour pay raise and more time off. pic.twitter.com/Bqwc8zZDzm

Organize for good, and good money: MLK Labor, the AFL-CIO body of King County, is hiring a new organizer. And they’re paying over $80,000! A whole-ass living wage! Somebody hop all over this.

We are the 99% Americans can’t seem to agree on anything anymore. Well, except for the fact that this economy sucks. In a study by the New York Times/Siena College Research Institute, 849 registered voters were interviewed, and 99% of them said this economy is less than “excellent.” Fifty-eight percent said it was full-on “poor.” An appropriate word choice, considering we are all poor! We are fully getting screwed here, folks. Class consciousness: it’s crappening.

Workers threaten strike ahead of All Star Game: Next week is the MLB All Star Game in Los Angeles, where the Mariners will be represented by the best of us, bonafide sweetheart and transcendent talent Julio Rodriguez. Ahead of the event, Dodger Stadium workers voted 99% (!) to authorize a strike if their demands for better working conditions weren’t met. The MLBPA expressed its support (though fell short of boycotting the ASG). But the pressure and timing was enough: on Wednesday, contract discussions had resumed to avoid a strike. Nice.

What else? The NLRB reports union elections are up 56% (!); the International Trade Union Confederation named the U.S. as a country who “performs systematic violations of rights” (is that good?); and some local hard-working folks filed for union elections, from Cadman concrete in Ferndale to Leroy Newton Construction in Lakewood.

You know the deal: Send us your tips, send us your compliments, and please do not forget to sound off in those comments!

Now, your banger: Real ones know! Of course it’s “Walk It Out” by DJ Unk from the Year of Our Lord 2007! Go crazy folks, go crazy! And please, have yourself a great weekend. As my dad would say, these are the good old days.

Comments 5
Tags: Labor
The Stranger depends on your continuing support to provide articles like this one. In return, we pledge our ongoing commitment to truthful, progressive journalism and serving our community. So if you’re able, please consider a small recurring contribution. Thank you—you are appreciated!
CONTRIBUTE NOW