Teamsters Rally in SLU, Big Win for Health Care Workers, and THESE BANKS ARE GONNA BUST!!! The Teamsters took a break from their annual Women’s Conference in South Lake Union on Tuesday to kick off a thousand-person rally at Bezos’s Balls. Fred Nye

Back at it, coming to you live from the suddenly autumnal weather in Seattle, where it’s warm in the sun but not in the shadows, and yet it still smells like a campfire. Anyhow, we’ve got a lot of wins to discuss, so let’s get into it.

Boo-hoos 4 Bezos: What a week for Bozo and his flunkies. Wednesday, the New York Times reported that the National Labor Relations Board issued a complaint accusing Amazon of targeting union supporters. The LA Times exposed the working conditions at Amazon warehouses in California during a heat wave, reporting that in certain areas temperatures reach 121 degrees. The company also made headlines for promoting a former private prison executive to take over training for their warehouse employees.

Teamsters hold giant rally in SLU: And all this came after Teamsters took a break from their annual Women’s Conference in South Lake Union on Tuesday to kick off a thousand-person rally at Bezos’s Balls, which resulted in some excellent videos like this one. Fee-fi-fo-fum…

Right now: #Teamsters are taking action at Amazon HQ, fighting for more workplace protections in the warehouse and logistics industry, and defending workers from the unchecked exploitation of one of the world’s most dangerous employers. #1u pic.twitter.com/vFVVX2tfxg

This prompted a tweet from Bernie, who does not miss:

The Teamsters are right: Amazon cannot be allowed to continue busting unions. If Jeff Bezos can afford a $500 million yacht he can afford to treat Amazon workers with respect, not contempt. Let’s build a union movement that can’t be stopped. https://t.co/xJBDZsjRSr

Big ups to up-north folks, Part 2: Let’s stick with Teamster wins and head up north. Last week, I reported that workers at Unifirst Canada in Langley, BC, won 15% raises. This week, the union reported that folks at Robert Transport won raises of 12.99% to 21.7% in their new three-year contract, along with improvements to their pension plan and overtime policy.

Starbucks strike ends in victory: 64 days into their strike, the longest in Starbucks history, Boston Starbucks Workers United is claiming victory after the company finally agreed to drop their “minimum availability requirement.” Working Mass, the Massachusetts DSA Labor Outlet, claims workers held the picket line for 24 hours per day for these 64 days to get this requirement dropped.

EXCLUSIVE: Starbucks has spent months illegally stalling negotiations with @SBWorkersUnited — and we have the inside details.

Howard Schultz’s team is deploying lies, last-minute cancellations, absurd proposals, and delays as they fire workers and try to bleed out the union. pic.twitter.com/GUQjVyfvCe

UW health care folks picket: Speaking of delays, members of SEIU 925 held an informational picket on Wednesday across all UW campus sites to put some pressure on the university, with whom they’ve been negotiating a contract with since July. The union says their main demands are “long-term solutions to short staffing at the medical and education facilities, including pay to incentivize retention.”

Big wins for health care workers: They’re hoping to see a wins of the kind that the workers at Providence Swedish just racked up. Unionized with SEIU 1199, members voted overwhelmingly on Tuesday to ratify a new contract and, folks, it appears to bang: the workers will get raises of 21.5% or $6.50, whichever is greater, over the next two years.

Entertainment folks trying to balance the scales: Creator-types are expressing outrage as Twitch announced this week that they’re cutting pay for creators who use their service. This comes only a couple weeks after the Writers Guild of America had to take Amazon to arbitration to get back over $4 million for “underpaid residuals and interest owed to 37 screenwriters on 31 films produced or acquired by Amazon” and a month after getting $42 million back from Netflix over unpaid residuals. Big wins for the people, but yikes.

Oh shit, THESE BANKS ARE GONNA BUST!!! 🍆💦: After news that workers at Wells Fargo are organizing, Congresswoman Aryanna Presley asked CEO’s from the country’s six largest banks if they would support their workers doing the same. You’re never gonna believe what they said:

Not a single bank CEO could commit to not interfere in their workers' efforts to unionize.

Your workers are watching & they deserve accountability. pic.twitter.com/Uvev3vJ7X4

Railroad strike still on: Despite what you may have heard, there’s no agreement yet, and the clock is ticking. Here’s a Lever Time pod about it (Spotify, Apple).

I am making a personal plea to the executives of Molson Coors to get a deal done:

🚨 The Milwaukee workers who make Coors and Miller are threatening to strike.

They overwhelmingly voted down a new proposed contract last week, demanding better wages, paid time off and an end to excessive overtime.

Professional union-busters shook: In their Labor Day Report, notorious union-busting firm Littler Mendleson, who Starbucks hired earlier this year, announced, “We are on the cusp of witnessing what has the potential to be one of the most pro-union eras in modern history.” Shook.

Won’t somebody think of the small business owners?!

Hi, I’m the owner of The Oatmeal Shack, and I make the worst oatmeal you’ve ever tasted. And I’m closing due to crime and also wokeness

What else, pumpkin spice flavored: The Starbucks store at 1144 Elliott Avenue West filed a petition for a union election with the NLRB Monday. The Washington Post dug into the alleged mistreatment of Black coaches by the NFL. The benevolent billionaire who gave up Patagonia is proving there are no good billionaires. GEICO United, who last week tweeted that management removed the bulletin boards to keep organizers from posting union materials, filed unfair labor practices against the company. And, because companies will try anything but pay adults fair wages, Chipotle was caught by the state of New Jersey for “alleged widespread and persistent violations” of child labor laws and settled for $7.7 million. This comes after Massachusetts caught the company doing the same thing in 2020 and forced them to pay $1.4 million to the state.

This tip, this tiiipppp: If you are keeping the Faith and have a tip to share, please send it here! Press releases, leaked docs, rumors—fire up the old email machine and shoot one my way.

Bop it: How have I not used that before? Anyway, here’s a smooth banger that slays in some big old chonky headphones. It’s “Midnight in a Perfect World (Extended Vision)” by DJ Shadow. A long one you can sink into and vibe with. Enjoy! That’s it for me, folks! Have a great weekend. 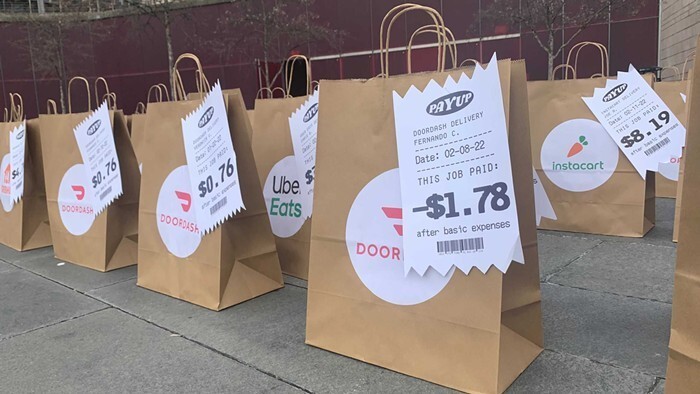