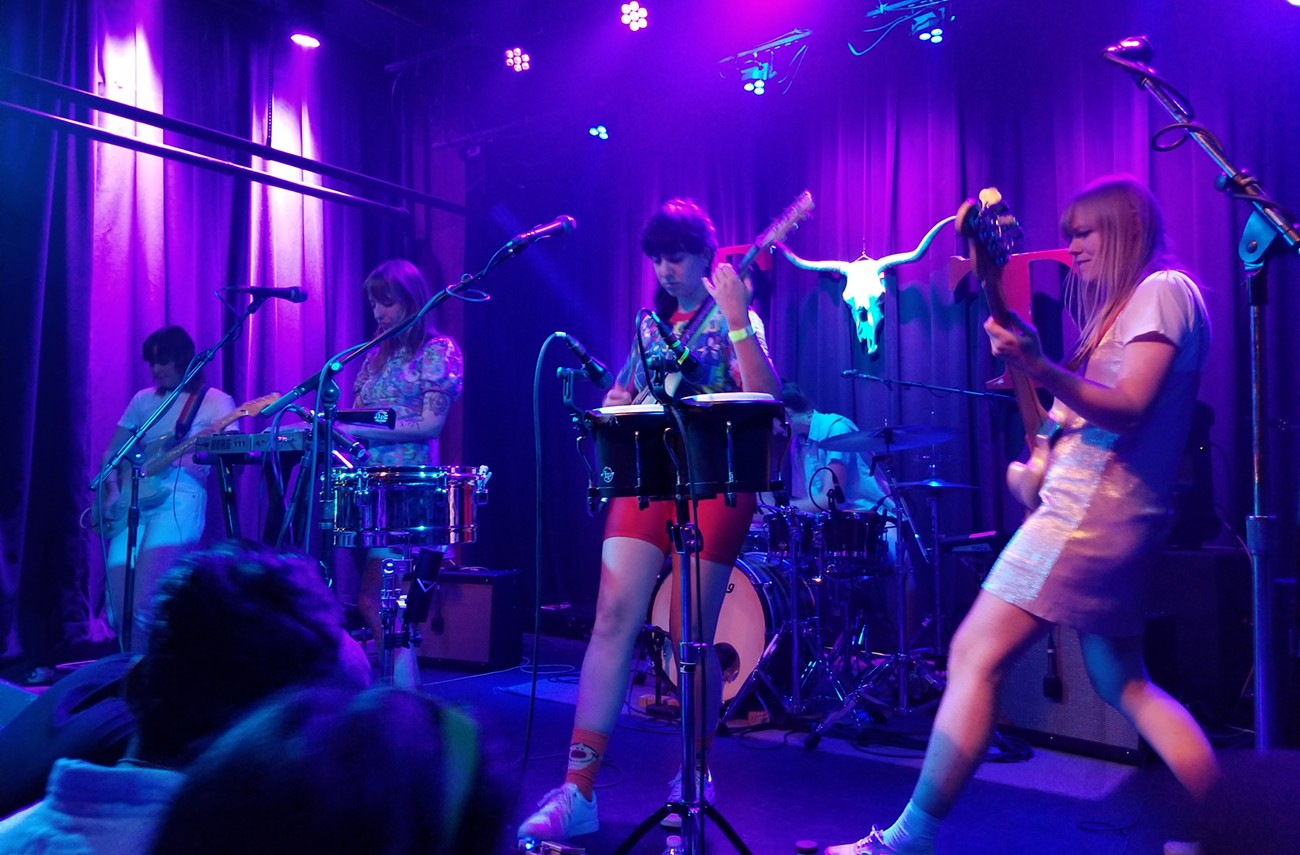 Un-fun fact: The number of all-women instrumental bands in the rock sphere is small. For any such group to sell out gigs in North America and perform live on KEXP is extraordinary, though I wish it were more common. Anyway, London-based quartet Los Bitchos are accruing buzz via their live performances and excellent new debut album, and it's all justified. Their sold-out show at the Tractor Tavern last night inspired roars of approval that one imagines the Bangles received in the '80s.

Australian guitarist and percussionist Serra Petale has described Los Bitchos' music as “instrumental psychedelic sunshine cumbia,” but that doesn't tell the whole story. Uruguayan keyboardist Agustina Ruiz, Swedish bassist Josefine Jonsson, and English drummer Nic Crawshaw have also immersed themselves in the '70s freak-rock pyrotechnics of Turkish greats such as Erkin Koray, Ersen, and Barış Manço as well as the peppy ritmos of Peruvian chicha and good ol' American surf rock. While this unlikely mishmash could come off as studied and arid, in Los Bitchos' finessed hands and feet, these disparate influences translate into exotic party music par excellence. It's no shocker that they've collaborated with rising Turkish stars Altın Gün.

Walking onstage to Goodboys' “Bongo Cha Cha Cha,” Los Bitchos telegraphed that they came to get everyone loose before they even played a note. But just because Los Bitchos slant toward party music, it doesn't mean their sound is rudimentary or banal. On the contrary, it's rooted in rigorous displays of virtuosity, even if they're sometimes accompanied by synchronized dance moves.

The modes in which their guitars and keyboards are played are rarely explored by Western rock bands, and that contributes to Los Bitchos' fresh allure. Further, the songs on Let the Festivities Begin! are danceable, but not in obvious ways; their dynamics swerve in unexpected directions, the rhythms often weirdly angled. The members' blatant joie de vivre onstage spills over into their music.

The penultimate tune of the set featured a frenzied climax in which the tension was ratcheted up to a mind-boggling degree. Then, before lunging into the last of their 15 songs of the night, Los Bitchos took well-earned swigs from a bottle of tequila... and did a riotous, sped-up cover of the Champs' surf classic “Tequila.” Afterward, a group hug ensued, and then their sound person cued up Mötley Crüe's “Home Sweet Home,” as the crowd clamored for more.

Seattle trio Weep Wave opened the show and proved that, against great odds, hard rock still has some vitality in it. Left-handed guitarist and vocalist Dylan Fuentes looks and sings like a truck driver or auto mechanic, but his chops are torqued—stinging, slashing, and distorting incisively. He speak-sings in the declamatory manner of Protomartyr's Joe Casey, lending a cantankerous urgency to many of Weep Wave's songs.

They have ferocious, fast rockers, they have rumbling, midtempo rockers, and they have tender tunes with poignant, Sonic Youth-ian melodic contours. Fuentes also slips in surprising Eastern tonalities that highlight their psychedelic tendencies; the guitar part of one track (“The Void,” I think) reminded me of the Pastels' “Baby Honey,” another of the Clean's “Point That Thing Somewhere Else.” Those are great reference points for a group that scans as meat-and-potatoes rock—albeit high-quality meat-and-potatoes rock. The crowd duly loved them. It wouldn't be surprising to see a Sub Pop or Matador Records contract in Weep Wave's future.

Beatlemania, Except for 21st-Century Japanese Psych-Rock

“We've Branded Ourselves as Being Unbrandable”