From Bryn Mawr to Day In Day Out, Her Journey is One of Style and Creativity 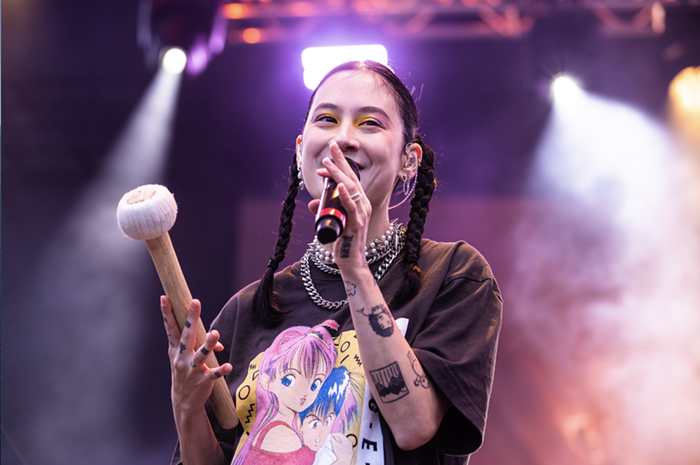 A musician’s evolution includes both their growth as an artist and a person, and this is especially true of Japanese Breakfast, aka Michelle Zauner, who committed to indie rock early, playing in bands and managing music bookings at Bryn Mawr College in Pennsylvania.

Since then, Zauner’s expressive complexity has grown. Most recently, she showcased her expansive capacity for musical production during this year’s Day In Day Out Festival, where she performed heavy hitters from her repertoire like “Road Head” and “Everybody Wants to Love You.

The design elements to her performances are impeccable. In previous performances, Zauner has sported garments by Issey Miyake, Simon Rocha, and Sandy Liu. During her DIDO set, she wore a graphic tee layered over a billowing yellow skirt, and built instrumental flourishes into her songs, including one from a Zildjean gong, which she smashed effusively with a mallet during “Paprika.” Zauner’s voice soars and strains with the sort of emotional fullness that comes with passing through deep grief. Her entire performance exuded a golden, glowing energy.

I once met Zauner in person, right before the pandemic when she played at my college in Western Massachusetts. The evening was chilly and damp, and a crowd of 300 gathered to see Japanese Breakfast perform. Zauner seemed polite but assertive; she’d done her own makeup, with streaks of blue eyeshadow, and wore a dress inspired by qipao, a classic Chinese silhouette.

We traded items of relative sentimentality. She gave me a “Japanese BreakQuest” sweatshirt from the merch table, and I gave her a signed copy of Pachinko by Min Jin Lee, then a writer-in-residence in my liberal arts college. I asked Zauner about an upcoming album, and she told me that it was “about finally feeling happy.” A year later, the soaring “Jubilee” came out. Last weekend, Zauner embodied that album’s sun-drenched quality. She was grinning, ecstatic, and jubilant on the festival stage.