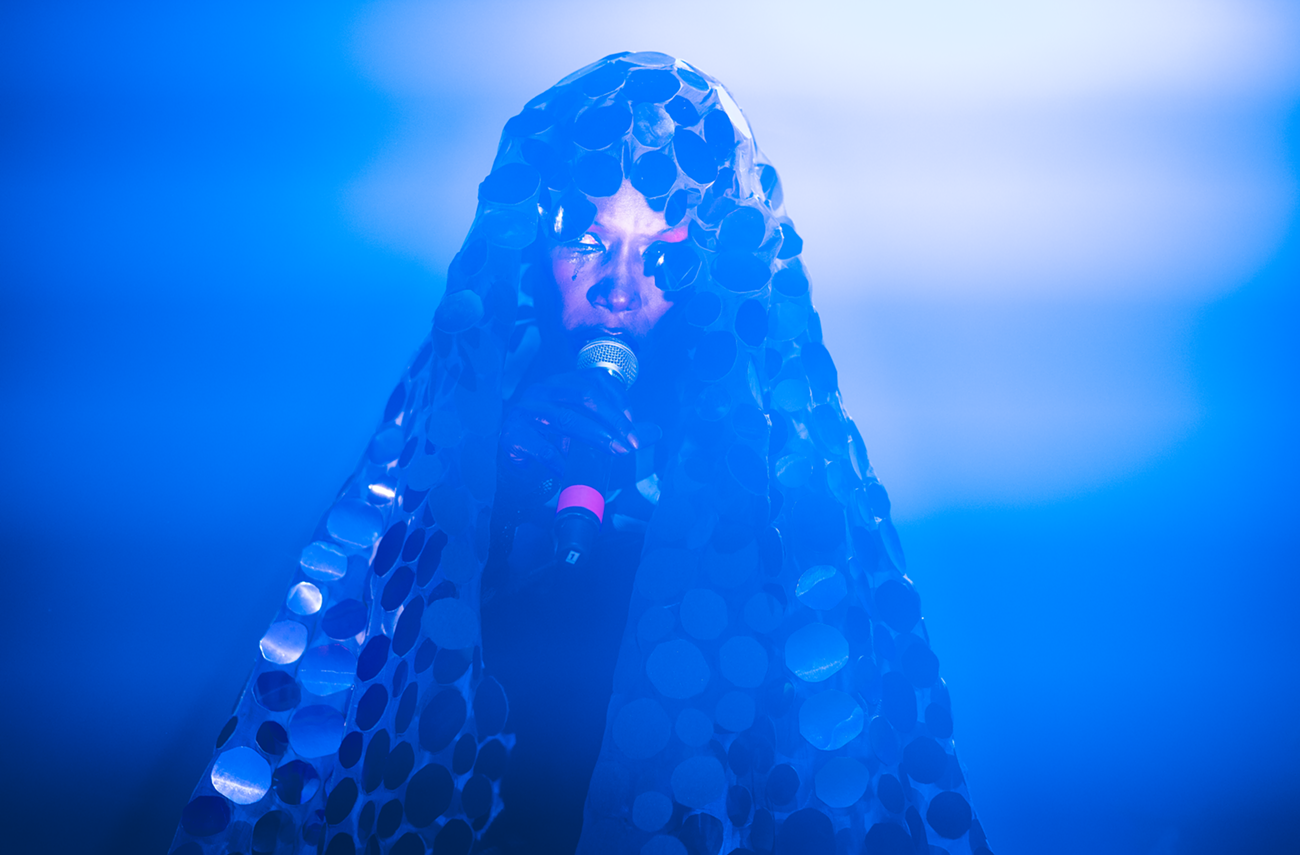 Maybe because it seemed like a bucket-list show for many people (and, gurl, did they dress for the occasion), or because earlier in the day, New York Attorney General Letitia James lit the fuse of the bomb that will explode the Trump Org, or perhaps because of both, the crowd was amped to absorb the Grace Jones Experience at the Moore Theatre last night.

Truthfully, the Jamaican-American singer-songwriter-actor could've just walked around the stage bantering and changing into and out of fabulous outfits all night, and the audience would've gone home sated. But, thankfully, Jones and her deft band boomed through some of the icon's most beloved material in an 80-minute set that featured breathtaking wardrobe changes after nearly all of its 11 songs.

This Seattle gig is the first of a compact three-date US tour for Jones, and her band came in tight as a drum with Iggy Pop and David Bowie's decadently lurching “Nightclubbing.” This ominous, heroin-chic chug is not an obvious opening move for a crowd champing at the bit for her highness, but it revealed Grace's perversity. Plus, the song plays to one of her strengths as a singer, allowing her to sprechstimme in a low register. The bass was seismically deep and sexy af, and it and the drums overpowered everything else in the mix throughout the night. Perhaps because of my vantage point way up in the balcony, I could barely hear the two keyboardists and guitarist. Whatever the case, this bassist was a beast. (I tried in vain to find the band members' names online [except for her son Paulo Goude on percussion], and couldn't decipher everything Jones said during the introductions, so apologies for lack of details.)

The set leaned heavily on long-time faves from the 1981 Nightclubbing LP, 2008's Hurricane, and Jones's peak from 1980, Warm Leatherette—but, alas, they did not perform the Normal's “Warm Leatherette” itself, which is one of the most astonishing reinventions ever. (While I'm quibbling, the absence of “Cry Now, Laugh Later” and “Nipple to the Bottle” was disappointing. One of these instead of the Christian hymn “Amazing Grace” would've worked wonders.) I'd not spent much time with Hurricane, but the humid Caribbean shuffle of “This Is” hit hard, and the harrowing, autobiographical power ballad “Williams' Blood” soared passionately.

For the menacing dub-rock renovation of the Police's “Demolition Man,” Jones crushed two cymbals and then tossed the stands behind her, displaying the vigor of someone half her age. After that song, she quipped, “Good thing I don't wear false eyelashes; they'd be down on my cheeks by now.” Next, she donned a cape in Jamaican flag colors for the seductive dub strut of “My Jamaican Guy,” which included Grace flexing yoga poses and then lying on her back and spreading her legs for the titular hombre. The crowd went wild. As they also did when she launched into Roxy Music's “Love Is the Drug,” for which the group generated a massive, rapid throb of libidinous energy, as multi-colored lights reflected off Jones's diamond-encrusted bowler hat. Near the end, Jones coaxed the audience to sing the track's earworm-y “oh-oh”s, which, frankly, wasn't Ferry good.

Donning a Gaultier jacket later in the set, Jones proved that “Pull Up to the Bumper” has lost none of its lubricious potency and that her voice projects with the same authority as it did during her Compass Point-era zenith. During this hot jam, Grace sat on the shoulders of a man who commenced to walk around the VIP section as Grace soaked up the adoration.

The night closed with Jones's 1985 hit, “Slave to the Rhythm,” which Jones sang while gracefully working a hula hoop and wearing a spiky headdress that would make Björk envious. A woman from the crowd jumped onstage, bust some fantastic moves, and got raunchy with the star, and the crowd went nuts... except for this woman seated near me in the balcony who dropped over $100 for a ticket, only to spend the entire night—including during DJ Supreme La Rock's uptempo two-hour opening set—with eyes glued to her phone.

With astounding litheness (how is this woman 74?!), Grace Jones reminded us why freaks of many stripes worship her wit and uncanny ability to subvert gender expectations and to transform other people's songs into fascinating expressions of her own domineering yet warm personality. It was gratifying to see this unique talent still flourishing at this late date.

04 I've Seen That Face Before (Libertango)

10 Pull Up to the Bumper

11 Slave to the Rhythm

It's Bandcamp Friday, You Should Buy Some Music