Beatlemania, Except for 21st-Century Japanese Psych-Rock

Kikagaku Moyo End Their Career on the Highest Note Possible 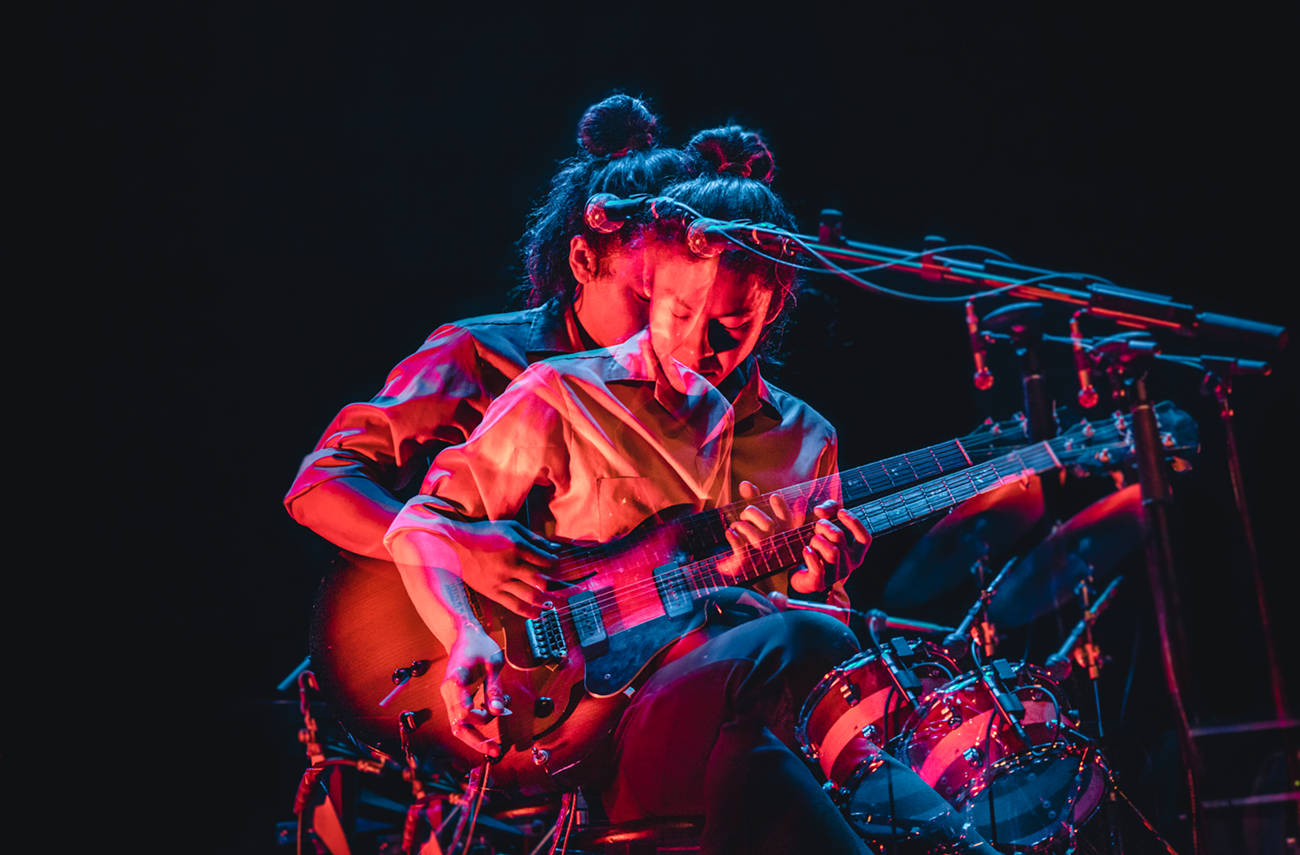 To an aisle-crowding and very enthusiastic audience at the Moore Theatre last night, Kikagaku Moyo performed their last ever show* in Seattle as if they wanted to permanently imprint their music on all of our cortexes. Judging by the overwhelming screams and whoops of approval, they succeeded spectacularly. I had to plug my ears after every song, as the shrieking reactions became unbearable. How an underground Japanese psych-rock group garnered the traction to play a 1,800-capacity room and induce mass hysteria in 2022 remains one of music's great unexplained mysteries, but you love to see (and hear) it.

In a baller move, Kikagaku Moyo walked on to Harvey Mandel's transcendent cover of the spiritual standard “Wade in the Water,” priming us for an unconventional religious experience. They began the set seated for the first two selections: “Cardigan Song” and “ Old Snow, White Sun.” The former twinkled into life with gorgeous, crystalline curlicues of guitar and electric sitar, augmented by maracas and shakers, before shifting into an easygoing, Popol Vuh-esque ramble. It takes confidence to not open with a bang on this auspicious occasion, and Kikagaku were soaking in it. “Old Snow”'s slowly rolling folkadelia hummed with Byrds ca. “Draft Morning” vibes, and it felt so damn good to let it tranquilly cascade over us.

This track, like many by KM, is a masterclass in dynamics, and it was the fieriest I'd ever heard by them... until later in the set when they let off a massive explosion after blissfully lulling us with spectral guitar glow and all sorts of small percussion toys on “Silver Owl.” A blazing rendition of Ananda Shankar's “Streets of Calcutta” made me wish the late sitarist were alive to witness this tribute to Indian psychedelia at its most heroic.

This was the night's theme: Kikagaku Moyo flaunting all of their styles with as much finesse and intensity as they could muster. They implicitly trust their fans to go wherever they lead, and we reaped the bountiful rewards. And then after the sinuous “Monaka”—redolent of People's Ceremony ~ Buddha Meet Rock—KM graciously waved goodbye. But the Moore massive wasn't ready for this magical night to end. We clamored for an encore, replete with rhythmic clapping, in a demonstration of devotion that verged on Beatlemania. The begging worked.

Kikagaku Moyo (drummer/vocalist Go Kurosawa, guitarist/vocalist Tomo Katsurada, bassist Kotsu Guy, guitarist Daoud Popal, and Go's brother, sitarist/keyboardist Ryu Kurosawa) returned to gift us with two more songs. The bluesy boogie of “Kodama” proved that KM can do this American shit as well as the yanks. Then they wisely chose to close with Masana Temples highlight “Gatherings.” It's a slashing, mesmerizing jam in the vein of Can's “Full Moon on the Highway,” and its molten chug could make King Gizzard & the Lizard Wizard lose all of their “z”s. What a way to go out.

Canadian synth/laptop player Yu Su opened with a full rock-like band behind her—surprising after seeing her perform a solo electronic set at 2018's Corridor Fest. Their music ranged from New Age-y pop to !!!-like disco-rock to swift motorik jams to a noise squall buttressed by a “When the Levee Breaks” rhythm. Overall, a varied and delightful warm-up for the headliner's historic farewell.

*Earlier this year, Kikagaku Moyo declared that they're going on an “indefinite hiatus,” but don't be shocked if they come back, better than ever.