Queer Groups Hold Out Hope That Harrell Will Do More 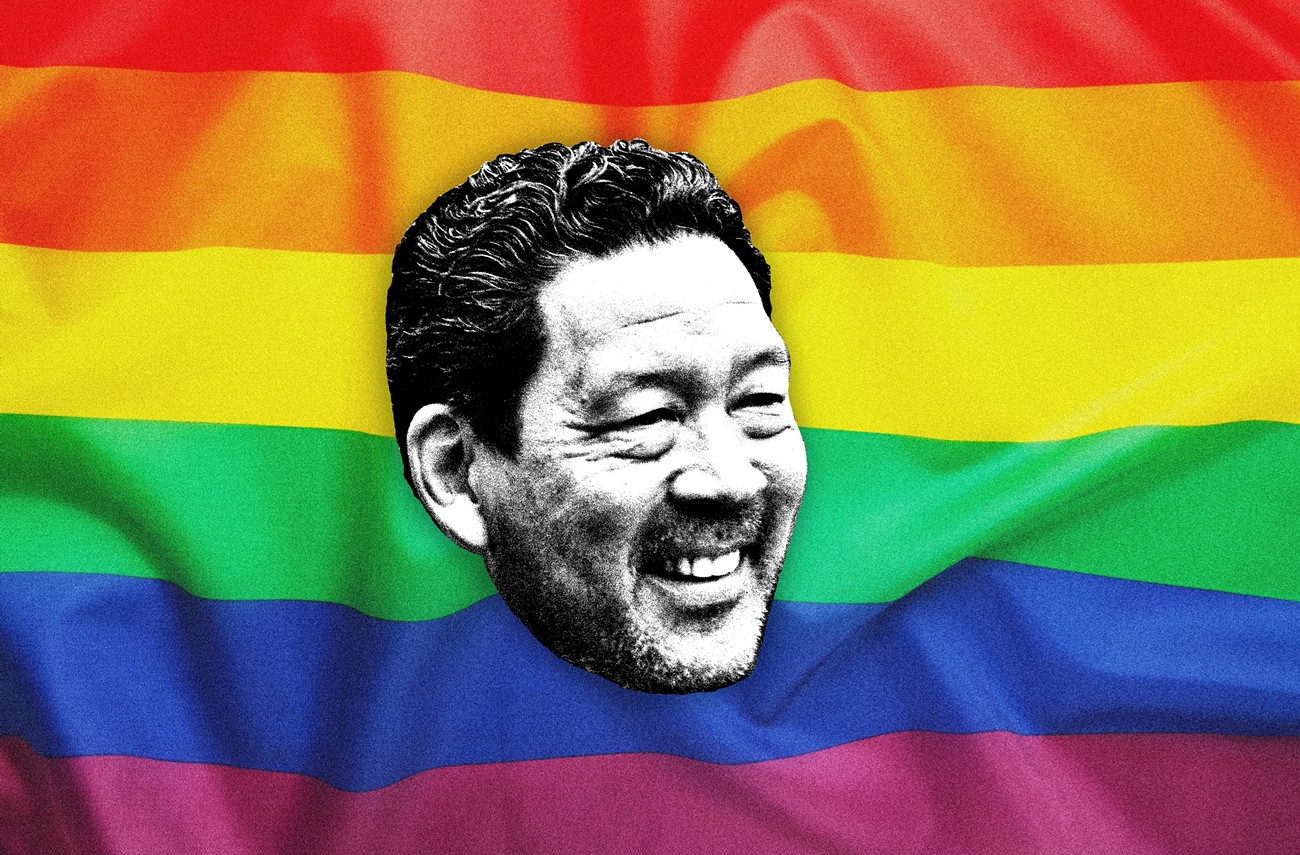 For the first time since he's taken office, Harrell's administration will sit down with the LGBTQ Commission to discuss the way the jail treats trans people and more funding for queer groups. CROUTON / LESTER BLACK

On June 1, Mayor Bruce Harrell raised a rainbow flag in front of City Hall to commemorate his first Pride month in office.

He kept his remarks brief and general. Rather than speak to what he has done as Mayor to improve the lives of queer people in Seattle, he joked that he was born after the first institutionally recognized Pride week, which would make him at least 15 years younger than he actually is.

He also made Senior Deputy Mayor Monisha Harrell “cringe” when he started speaking off the cuff. He said that even though the new Mayor of Cincinnati’s team got to go to the Super Bowl, and even though the new mayor of Boston’s basketball team made it to the 2022 Eastern Conference Finals, he has the “best hand” of the newly elected mayors. “And why? Because of this,” Harrell said, gesturing to the queer advocates behind him.

“The LGBTQ+ community demonstrates the best in ourselves. Love, compassion, determination, courage, strength, all of those attributes that makes the city great. I have the best hand. It will be even better when we do get an NBA basketball team by the way.”

Other speakers at the event, such as Councilmember Tammy Morales, sounded the alarm on the startling, nationwide rollback of LGBTQ rights, from the rise in anti-trans legislation to the Supreme Court's decision on Roe v. Wade. The sentiment stood in stark contrast to Harrell’s joke about his age and his suggestion that he liked queer people more than the Super Bowl.

“[Harrell] is excellent at saying he loves everybody. I’m glad he loves everybody,” said Gary Toleman, an organizer with the Freedom Socialist Party who advocated for queer rights in Portland during the height of the AIDS crisis. “You can put up your flag, say some warm fuzzies, but let's see what you're doing.”

What’s Harrell doing for The Gays?

So far, during Harrell’s nearly seven months in office, queer advocates told The Stranger that the flag thing is sort of the highlight.

I asked Harrell’s office what he has done for his queer and trans constituents during his time as mayor. His spokesperson, Jamie Housen, said the Mayor’s first instance of queer advocacy in office was giving the job of Senior Deputy Mayor to his niece, Monisha Harrell, who is recognized as a champion for LGBTQ rights as Board Chair for Equal Rights Washington.

Housen also implied that Harrell deserved credit for the Seattle Department of Education and Early Learning’s $440,000 in grant awards for the Black Girls, Young Women, Black Queer and Transgender Youth investment program. While the department announced the awards during Harrell’s second week in office, the city council allocated that money during its budget negotiations under Mayor Jenny Durkan.

The bulk of his queer accomplishments occurred during his time on city council. He supported marriage equality efforts, supported a ban on conversion therapy for minors, and sponsored and passed legislation to remove trans health care restrictions from the City of Seattle’s health care policies.

However, now doesn’t seem like the time to coast when it comes to LGBTQ issues. In the first three months of 2022, state legislatures across the country filed over 230 anti-LGBTQ bills. That’s up from 41 bills in all of 2018 and 191 bills last year, which earned 2021 the now-dated title of the “worst year in recent history for LGBTQ state legislative attacks.”

But in Seattle, the new Mayor faces an incredibly low bar following Durkan.

Though Durkan was Seattle's first lesbian mayor, the City’s LGBTQ Commission called for her resignation because she she leveraged “very real harm” against Black and brown queer and trans people during the Black Lives Matter protests in the summer of 2020. Not exactly the biggest shoes for Harrell to fill.

Krystal Marx, executive director of Seattle Pride, suggested as much when I asked her about Harrell. “We haven't seen our queer neighborhood blasted with tear gas or heard about large amounts of phone records disappearing, so that's a good start!” Marx joked in an email.

Marx added that “we haven’t seen a lot of movement” on issues that are at the top of Seattle Pride’s list. That list includes policies such as holding cops accountable specifically around transphobia, homophobia, and sexism, as well as combatting the growing number of incidents of homophobic harassment and violence.

So far, Marx said, it “remains to be seen whether Mayor Harrell will be better, worse, or the same for LGBTQIA+ people'' compared to Durkan, as he has only been in office a little over half a year.

But Toleman argued that some of the hallmarks of Harrell’s politics, such as his approach to crime and his decision to increase sweeps, actively harm queer people.

Tension With the Cops

Though not completely floored by Harrell’s attention to queer issues, Marx did give Harrell kudos because his office asked Seattle Pride to partner on an effort to get queer and trans people to report hate crimes.

Building trust between queer people and cops could be an uphill climb. After all, the first Pride was a riot in response to police officers raiding the Stonewall Inn and brutalizing the queer patrons. This over-policing and violence continues across the country to this day, especially for Black Trans people.

Marx suggested the Harrell administration should listen to queer people without “defensiveness” and invest in services they need. She also said the administration could help to stop the over-policing of Black and brown communities.

The administration will put on its listening ears this week when members of his office sit down with the LGBTQ Commission for the first time.

The LGBTQ Commission’s co-chair, Victor Loo, said in an email on Tuesday that he would not share his thoughts on Harrell’s performance because he has not had an official meeting with him. According to Nona Raybern, the communications advisor for Seattle’s Office of Civil Rights, the commission will conference with Deputy Mayor Tiffany Washington to address concerns regarding sweeps and how they affect queer people experiencing homelessness.

While Harrell didn’t join his predecessor in celebrating Pride month by tear-gassing Seattle’s gayborhood, the City scheduled 24 sweeps for the month of June. In an email, Harrell’s Office presented his “ commitment to address the homelessness crisis with urgency, compassion, and action” as a step toward improving the lives of his queer and trans constituents.

His office correctly identified that unhoused people are disproportionately queer. In fact, according to a 2017 study from Chapin Hall at the University of Chicago, LGBTQ youth are 120% more likely to experience homelessness than non-LGBTQ youth. But Marx from Seattle Pride said the increase in sweeps under the Harrell administration does not help queer people living outside. “Sweeps do nothing but further alienate folks who need vital services,” she said.

Loo and Washington did not respond to my request for comment on the specifics of the private meeting with Harrell. However, Raybern said the commission is hopeful for an administration that is responsive to its advice.

Right now, the commission is working to improve the treatment of transgender people in King County Jail and to increase access to City funding for queer people, particularly queer people of color.

Despite not seeing “a lot of movement on issues,” Marx tried to maintain an optimistic tone. She hopes that the Mayor will fund more emergency services and permanent supportive housing for queer youth, as he promised in his answers for the 2021 Seattle Pride Voters Guide. In her words, making good on those promises “would show that he is truly committed to caring for his LGBTQIA+ constituency.”

Toleman agreed that the primary issue plaguing the queer community was the lack of housing and the related homelessness crisis. However, given Harrell’s close ties to corporate Seattle, which fights against efforts to make the City more affordable, adequately addressing those issues might prove difficult.

“He can put on the facade that he will address the needs of queer people in Seattle, but to really do that, he’ll need to go after corporate interest,” Toleman said. “And he’s not going to do that. He’s in their pocket.”