Come November, We'll Vote on How We Want to Vote 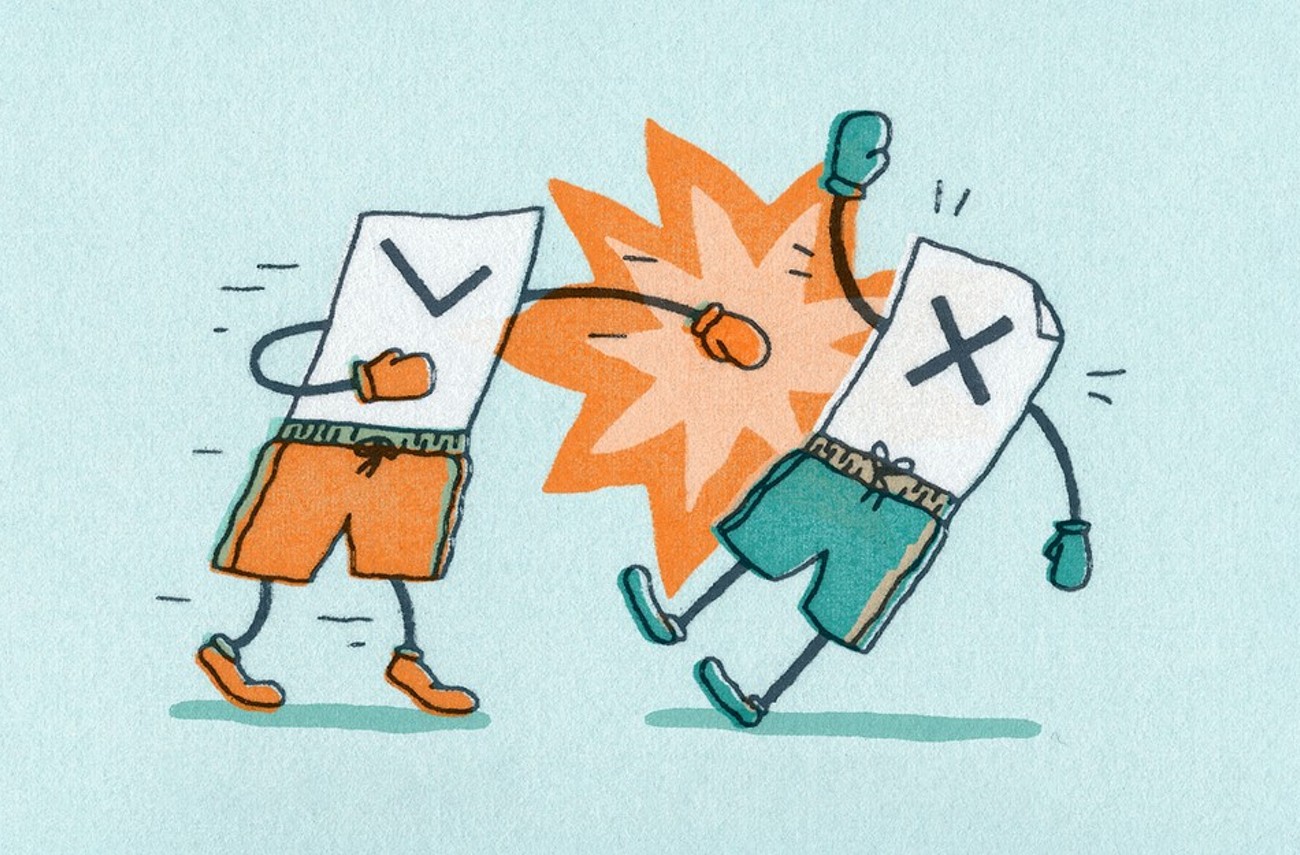 In a special meeting on Thursday, the Seattle City Council voted 7-2 to let voters choose between two different voting systems on the general election ballot in November. The vote will settle the months-long debate between approval voting and Ranked-Choice Voting (RCV) supporters, who think their respective reforms will lead to fairer elections.

Last year, pot shop owner and failed city council candidate Logan Bowers launched a crusade to implement a relatively new voting system known as approval voting. Under approval voting, voters select as many candidates as they like, and the one who draws the most votes wins. RCV allows voters to rank candidates in order of preference, and then the candidate with the majority of highest preferences among voters wins.

The Seattle Approves campaign convinced enough voters to sign on to its initiative, but as they did so they clashed with RCV advocates, who had been pushing their own system in the state and county for years.

Due to the ongoing discourse, during Thursday’s special meeting Councilmember Andrew Lewis, who was undecided about whether Seattle needed either reform to begin with, proposed a competing proposal to put RCV on the ballot as well.

“This discussion has gotten to a point where we run a risk of making a more undemocratic decision by depriving the voters of making that choice [between approval Voting and RCV],” he said.

He continued, “In essence, there would be a proxy vote where voting ‘No’ on approval voting would be reflecting a ‘Yes’ vote for [RCV] anyway.”

Supporters for RCV came in droves to the public comment period. As Lewis noted, approximately twice as many speakers advocated for RCV than for approval voting.

While proponents of approval voting claimed that their system would select “popular” candidates, advocates for RCV heard “popular” as code for “white.”

In a city that is mostly white, More Equitable Democracy Director George Cheung and Washington Community Alliance Director Kamau Chege believe that approval voting could drown out minority voters. That argument resonated with Councilmember Lisa Herbold, who said she voted “Yes” because of the concerns that approval voting would give white voters outsized power. Similarly, Councilmember Kshama Sawant said she voted in favor because “Approval voting is a scheme to drown out anti-establishment voices in a sea of pro-establishment candidates.”

Some advocates for RCV also warned that the less-tested approval voting system could open up the City to lawsuits. They argue that it may violate the Federal Voting Rights Act and the Washington Voting Rights Act. To that point, Bowers argued that the particular version of RCV in Lewis’s proposal hasn’t seen much scrutiny either, as typically RCV combines the primary and the general elections, but in Seattle the City would only implement the system in the primary in order to adhere to current state laws.

During public comment, the supporters of approval voting mostly stuck to the argument that the Council should not interfere with Seattle Approves campaign’s efforts.

One speaker read from a letter from a national reform group known as Open Primaries.

“If people see RCV as a tool used by politicians to derail other voting reforms, not as a genuine reform, that will impact negatively. That kind of political manipulation, it's beneath a highly regarded, progressive city council,” the speaker said.

Councilmember Sara Nelson echoed similar criticism, suggesting the council should “just get out of the way.”

To be clear, the council is allowed to put competing initiatives on the ballot. It’s not weird or sneaky–it’s on the webpage for the initiative process. Councilmember Teresa Mosqueda argued that putting another initiative on the ballot was not interference but rather an act to further democracy. "This is a question about engaging in our democracy. And there's nothing more democratic than giving voters a choice on something so consequential,” she said.

Besides, the move isn’t unprecedented. The council put a competing proposal against an initiative on a ballot as recently as 2014, when former Councilmember Tim Burgess offered an alternative to a child care initiative.

Lewis reminded Nelson and others of this fact, but she wasn’t convinced. She claimed that Burgess worked for “months” to develop his alternative policy. She also failed to acknowledge the fact that the movement to change our elections to RCV far predates approval voting. FairVote and other groups have pushed that system much longer than “months.”

Ultimately, Nelson voted “No.” Council President Debora Juarez also voted “No.” She argued that the real system stymying diversity was the legislative-aide-to-council-member pipeline.

Though a usual ally to Nelson and Juarez, Pedersen voted “Yes,” but he didn’t sound too excited.

“If either of these two new measures is enacted into law, will they really increase public safety or reduce homelessness? I’m not so sure,” he said, ignoring the fact that changing elections may change who is elected and thus the policies they implement.

With a majority vote, the council will put RCV on the ballot in November along with approval voting. The ballot will first ask voters if they would like to enact a change in voting systems in the first place, and then, in a separate prompt, it asks voters to choose between approval voting and RCV.

“To use a pizza analogy, the way it would actually work is like if you asked a voter if they wanted to go in on a pizza. It's going to be veggie or meat lovers, but you don’t tell them which until after they commit. Seems like the vegetarians might have an issue with that!” He said in a text.

Advocates for RCV don’t seem to share his concern. Ben Chapman, communications manager at FairVote, said he is confident that voters are ready to adopt RCV.

“I’m excited that FairVote Washington gets to intensify the outreach we’ve already been doing to make sure voters are ready to vote ‘yes’ for change and ‘yes’ for ranked-choice voting when the time comes,” Chapman said.