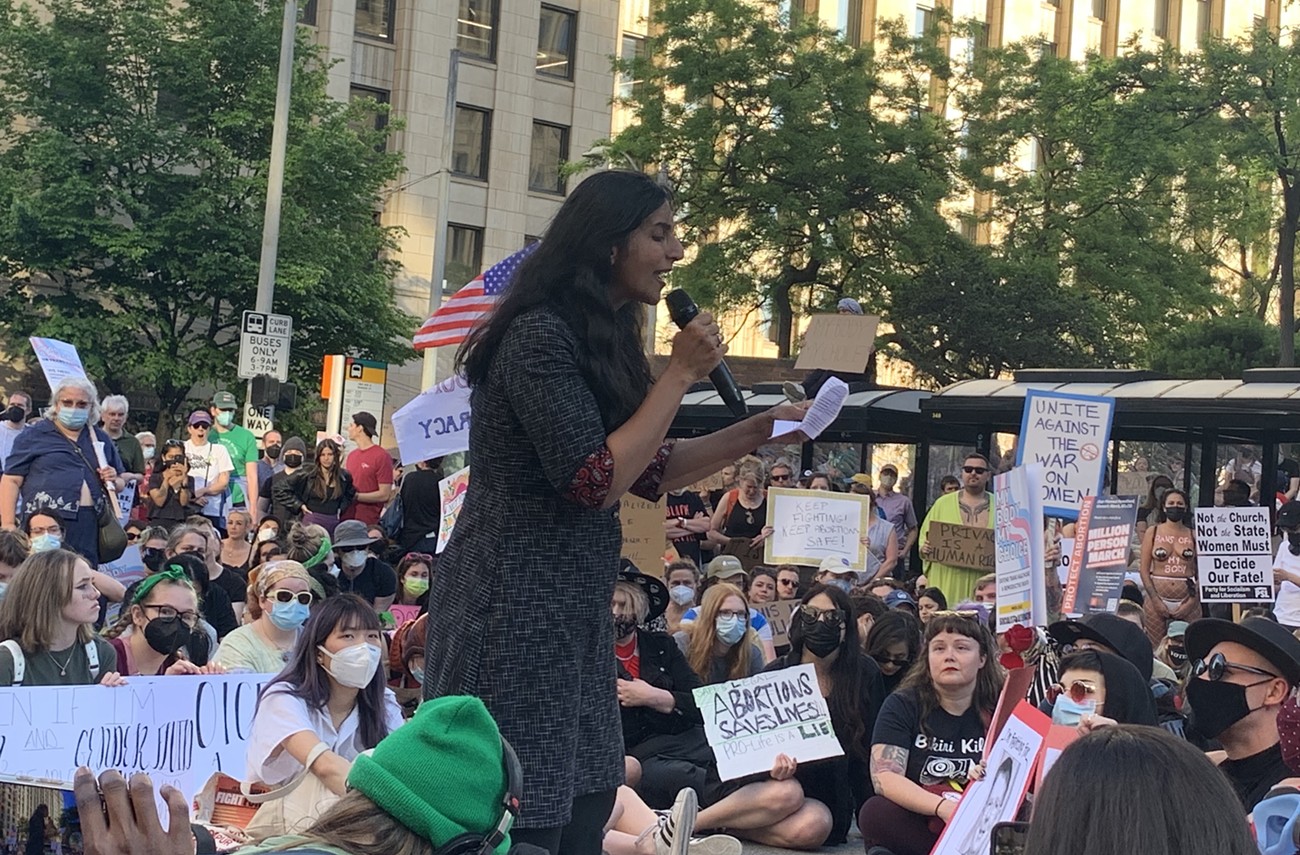 Sawant sold the legislation as a way to make Seattle an "abortion sanctuary." HK

In response to the Supreme Court’s decision to overturn Roe v. Wade, which ended the constitutional right to an abortion, the Seattle City Council passed its first binding protection for those seeking abortion care in Seattle. The bill, a walk-on sponsored by Councilmember Kshama Sawant, passed with unanimous support. However, the vote didn't go through without tension.

Sawant’s bill, which she announced in a press conference last month, makes Seattle an abortion rights sanctuary, which is to say the City won’t let Seattle police officers process arrest warrants for patients, doctors, and providers who have been criminalized in other states. In effect, the law would make it safer for people living under restrictive laws elsewhere to seek abortion and refuge in Seattle.

“Laws violating basic bodily autonomy and criminalizing reproductive health care are fundamentally unjust, and we should not allow Seattle to be complicit,” Sawant said in the council meeting.

The legislation adds to Gov. Jay Inslee’s Executive Order and Mayor Bruce Harrell’s pledge to instruct state and city police not to assist cops from other states in their efforts to enforce abortion criminalization. As Will Casey wrote, these kinds of laws have the potential to create a “doomsday scenario not seen since the Civil War.”

In the case of the Governor’s order, Washington's refusal to cooperate with a subpoena from a state that criminalizes abortion could render the state in violation of the constitutional clause that requires we all play nice and recognize contracts, marriages, and other legal documents issued by other states’ courts.

If the state gets in trouble for breaking the rules, or if the Governor changes his mind because Texas or some other red state makes a fuss, then Seattle would still have its similar law. That is, unless the City also gets in trouble for directing cops not to comply.

Though Sawant sent her supporters to call in and ask the council not to “water down” the legislation, the bill passed without any objections or amendments. Councilmember Lisa Herbold, however, took the discussion before the vote as an opportunity to clear the air.

Herbold reminded the public that she added a measure to an earlier resolution from Sawant that directly funds the Northwest Abortion Access Fund. Harrell has since said that he’ll find $250,000 somewhere to make good on that.

She also defended her track record on abortion rights by promoting two upcoming bills she’s co-sponsoring with Councilmember Tammy Morales. One bill would prevent discrimination based on a person’s pregnancy outcome. The other would create a misdemeanor charge for people who encroach or interfere with people seeking abortions or gender-affirming care. This is already a law on the state level, but if the state changes its mind, then Seattle will have that option on a local level.

Sawant did not respond to Herbold’s frustration about the email to her supporters, but she thanked her for supporting her bill.