Rep. Adam Smith Has a Mandate for Peace

A narrow majority of likely voters think the United States should lead negotiations to end the Russian war in Ukraine "as soon as possible," even if that means making compromises with Vladimir Putin, according to a new poll of Washington's 9th Congressional District, an area that covers South Seattle, Bellevue, Mercer Island, and south King County.

The findings give Rep. Adam Smith, the district's representative in D.C., a mandate for leading a movement in Congress to demand the Biden Administration work quickly to secure peace in the region, where fighting continues to grind on ahead of a potentially harsh winter that could test the trans-Atlantic alliance.

In a phone interview, Rep Smith said he thinks such a movement "helps," and that he's already joined. 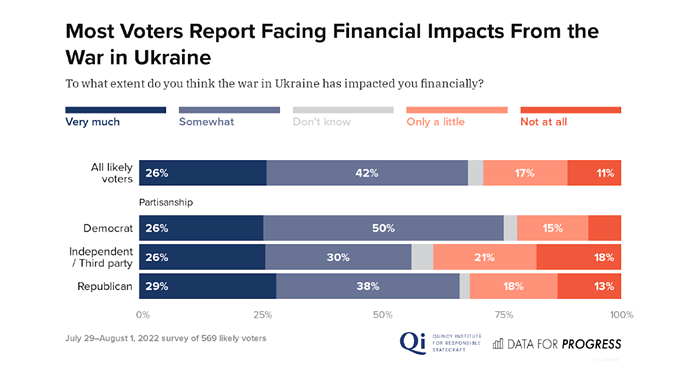 The poll found nearly 80% of people worried about the war going nuclear, nearly 70% seeing the conflict negatively impacting their own finances, and the vast majority expressing concern about "long-term global economic hardship, including here at home." Almost all people polled (90%) worried about the loss of life and livelihoods in Ukraine. 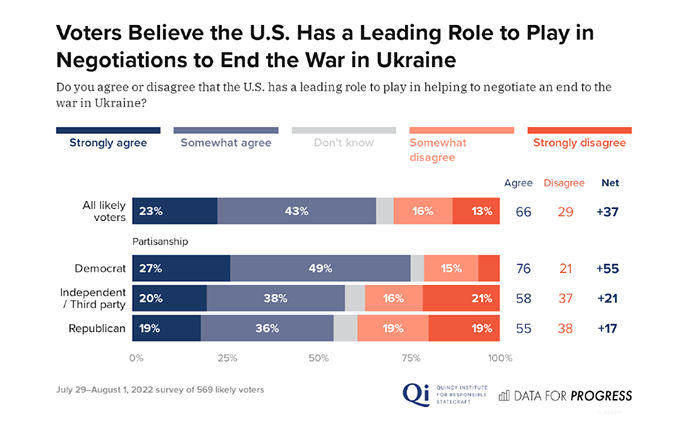 The Quincy Institute for Responsible Statecraft, a think tank that promotes military restraint, tapped Data for Progress to conduct the survey of 569 likely voters in the district. They polled people between July 29 and August 1 using text and web panels, and then weighed responses to better represent the district. The poll has a four-point margin of error.

Though the US continues to participate in some diplomatic efforts and prisoner exchanges, rhetoric from the Biden Administration suggesting "regime change" and wanting a militarily "weakened" Russia at the end of the war hasn't helped. That sort of bluster, Quincy Institute director George Beebe argues, feeds into Putin's narrative of the US cynically using Ukraine as a pretext to eliminate Russia as its great-power rival.

What would help, Beebe says, is US-led private negotiations between the belligerents. He imagines a deal wherein Russia ends its invasion and agrees to territorial concessions in exchange for the lifting of some sanctions and an agreement to keep Ukraine out of NATO. Instead of assuring protections through NATO, relevant parties would defend Ukraine's sovereignty through something like the security agreement President Volodymyr Zelenskyy offered back in March.

To help Zelenskyy overcome right-wing forces within his country from going nuts over the idea of accepting neutrality, Beebe argues that the US should provide strong assurances of continued economic and military aid to Ukraine. To get Putin to the table, he thinks the US needs to stress the costs of continuing to prosecute his war, namely the US sending higher volumes of better weapons to Ukraine.

To pursue that kind of secret diplomatic track, the Biden Administration would need political space that does not exist in the US at the moment, Beebe says.

That's where Rep. Adam Smith comes in. As chair of the House Armed Services Committee, Smith would serve as a powerful champion in a Congressional movement to push Biden to secure a swift diplomatic, solution to the conflict. The poll released today shows his district would support that effort.

In his public statements, Smith says he supports negotiations, but he also dunks on Putin a lot.

When The Stranger asked Smith how to end the war in Russia back in July, he said "the biggest thing we need to do is lead an effort to begin to negotiate," and he suggested "opening lines of communication" to Russia to achieve that end. On a recent trip to Ukraine, however, he called Putin a "profound threat to world peace and stability" while arguing that he was "not inclined to stop at Ukraine," citing statements from Russian Foreign Minister Sergey Lavrov threatening Moldova.

Over the phone, Smith said the poll's findings didn't surprise him, and that he agrees, as he has for a while now, that the US should play a role in negotiations, though "sadly, at the moment, neither Putin or Zelenskyy" support settlement negotiations, he said.

He also noted that the poll didn't name the concessions that voters in his district would feel comfortable with. "Do you think the US should pressure Ukraine to give up territory to Russia for peace, and if so how much territory and in exchange for what?" he asked. Beebe says, "Ukraine should be able to draw the lines."

As far as Biden's position on negotiations, Smith said he's spoken to "everyone in the Administration, including the President," and he said they "feel the urgency" behind the need to push for a settlement, though the question of what leverage they have to get Russia and Ukraine to the table remains open. "I think there are some behind-the-scenes discussions about it. They're thinking about what it could look like," Smith said.

"But the first step in getting to a negotiated settlement is that Putin has to know that he can't ultimately win," he said.

If communicating the US's desire to continue sending Ukraine more weapons helps to push Putin to the negotiating table, then Smith is doing a fine job of that. "In this fight, whoever can see far and shoot far is going to be in better shape," he told RadioFreeEurope as he discussed the 30 artillery systems the US aimed to send Ukraine's way.