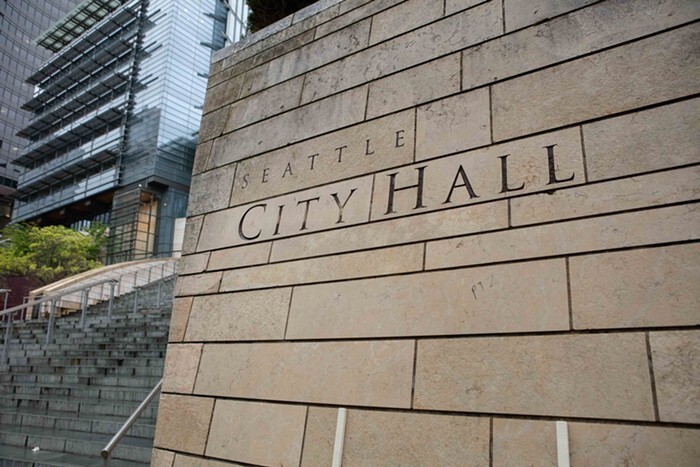 After a two-week recess, on Tuesday the council got right back to business by passing some big bills: a long-awaited cannabis equity package, a protection against misinformation about abortion, and a ban on gas-powered leaf blowers.

With months of upcoming budget deliberations crowding out policy discussions, council members say they plan to vote on a new film commission and a briefing on police alternatives.

Combined, the pre-budget policy squeeze amounts to a big win for local art enthusiasts who enjoy bodily autonomy and getting stoned equitably without the sound of a leaf blower killing their vibe—not an insignificant portion of the Seattle electorate by any means.

Of course, the Council could vote on policy during budget season if it wanted to. During last year’s budget talks, Councilmember Kshama Sawant tried to pass a policy that would force construction companies to pay parking costs for their workers. That attempt failed. But most council members, for better or for worse, are not Sawant, and so they will try to wrap up important policy points in this period between recess and budget season.

Councilmember Sara Nelson told The Stranger that she worked during the recess but took some time to visit Victoria, B.C. with her husband and oldest son before sending him off to college.

In the short period between recess and budget season, Nelson said she’s “excited” to pass the Seattle Film Commission legislation. As Jas Keimig previously reported, the legislation would establish a board to give the council advice on how to incentivize film and television production in Seattle.

According to Nelson’s announcement of the commission, Seattle used to be a much more inviting place for the film industry. Movie-makers filmed classics such as Sleepless in Seattle, 10 Things I Hate About You, Austin Powers, and Disney’s made-for-TV hit Radio Rebel right here in the Emerald City. Now everyone films their Seattle-set movies in Vancouver. We missed out on 50 Shades of Gray!

The council’s economic development committee plans to vote on the bill next week, which means it could see a final vote as soon as September 20.

Herbold and the Cops

During recess, Councilmember Lisa Herbold traveled to the east coast to visit friends and family in central and upstate New York, she said in an email.

Since her return, she’s already nailed down one post-recess policy. On Tuesday, the council unanimously passed her latest abortion protection, which will crack down on deceptive practices from crisis pregnancy centers. She worked on the bill with Councilmember Tammy Morales.

The legislation comes after the pair worked on bills to prohibit discrimination against anyone for real or perceived pregnancy outcomes and to give the City the ability to charge people for impeding access to health care facilities, including facilities that offer abortion care.

She will now train her focus on police alternatives. The Mayor’s Office and council central staff started meeting to draft recommendations on the issue, and they plan to wrap up sometime this fall. Herbold said she will update her public safety committee on the status of that work before budget negotiations begin. If the work group can finish up soon, the council will be better-informed for upcoming budget negotiations on alternatives.

As the Seattle Times reported last summer, up to half of calls to the Seattle Police Department do not require a response from a gun-carrying, badge-wearing cop, so some council members see opportunities to use police resources more efficiently.

The workgroup’s recommendations, which Herbold has not-so-patiently awaited, could amount to a huge step toward actually launching pilot programs to make good on promises the City made to Black Lives Matter protesters in the 2020 uprising against police brutality.

Mosqueda and the Money!

Councilmember Teresa Mosqueda said she used time over the recess to hire the newest member of Team Teresa, Melanie Kray. Kray, a recent graduate from the University of Washington School of Law, will lead Mosqueda’s office on public safety and public infrastructure policies.

But Mosqueda’s recess wasn’t all business. She said she spent as much time as she could “soaking up the last rays of summer” on Alki and in Jack Block Park with her “kiddo.”

In the first full council meeting after recess, Mosqueda finally passed her cannabis equity package with one slight change in response to criticism from Nelson and Black business interests.

Mosqueda initially wanted a nonprofit to lead the cannabis commission, which would set the agenda for future cannabis policy. She suggested We Work, which is an off-shoot of UFCW 3000, the grocery workers’ union. Nelson, wary of leadership from a union that has organized pot shop employees, put forth an amendment in an earlier meeting to suggest a “neutral” university lead the commission instead. During public comment, business interest groups agreed with Nelson.

Mosqueda got her way during the committee vote, but Nelson hinted that she might bring the amendment to full council.

At the council meeting on Tuesday, Mosqueda and Nelson joined forces on an amendment that asked the Mayor to pick a neutral third party to convene the commission, which was similar to Nelson’s earlier proposal. After hearing community feedback, Mosqueda said she didn’t want her policy to cause a rift between Black business and Black workers.

As for what’s next, Mosqueda, who writes the council’s budget, is focused on fostering a “productive budget season [that centers] equitable economic recovery and investments in working families and Seattle’s future.”