It Refunds SPD, Underinvests in Ending Pedestrian Deaths, But It’s Like 80% There on the Green New Deal 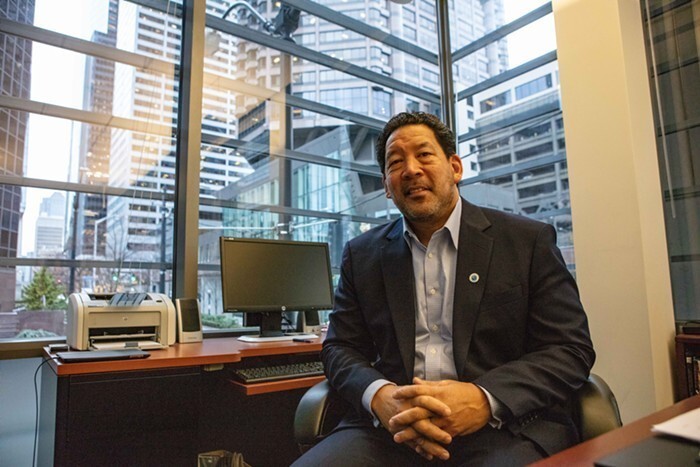 On Tuesday, Mayor Bruce Harrell unveiled his proposal for Seattle’s 2023-2024 budget. Despite a $140 million shortfall that forced cuts to most City departments, the Mayor’s Office managed to give more money to the Seattle Police Department (SPD), which fails to meet one of the many demands from the community-drafted Solidarity Budget, a coalition of groups that includes organizers from Defend the Defund, Seattle 350, and House Our Neighbors!

That coalition presented its budget demands last week, asking for what the organizers characterized, in many cases, as “the bare minimum” needs. In some aspects, such as policing, the Mayor didn’t meet that low bar. But in other areas, like in housing and environmental investments, the Mayor’s proposal overlapped with the Solidarity Budget. Not exactly #OneSeattle.

Refunding the Cops We Didn’t Defund

To make up for the budget shortfall, Harrell said that his office looked for savings everywhere. That meant dipping into the revenue from the JumpStart tax and making cuts to many departments, particularly those with saved money from unfilled vacancies. But SPD, which is notoriously unable to fill its vacant positions, didn’t see cuts. Instead, the Mayor’s budget made the police department one of the few agencies to see its salary savings reinvested in its own department.

“This isn’t investing in safety and things that keep people alive,” said Solidarity Budget organizer BJ Last. He added that the money would be better spent on housing, especially since the City dipped into JumpStart, which is supposed to fund development, to backfill the budget shortfall.

Still, Last said he would rather see the parking enforcement officers (PEOs) remain outside of the police department to reduce cultural influence between cops and PEOs.

Some city leaders lean on the lack of existing police alternatives to explain their aversion to divesting from policing. To smooth the transition away from a gun-and-badge-only response to all public safety issues, the Solidarity Budget asked for a $20 million investment into community-based responses to public safety.

That investment didn’t happen, either. The Mayor's budget proposed a $700,000 increase to police alternatives for a total of $2 million, just .05% of the proposed budget for gun-and-badge policing.

Last said this investment is nowhere near enough. However, he expressed skepticism about how the City will use money flagged for “alternatives,” saying that a true police alternative would not simply change the entry point into the criminal justice system.

The budget does not specifically give social workers the same hiring bonuses as the City gave the cops this year, as the Solidarity Budget demanded, though it did include $650,000 to account for inflation in service providers’ contracts in 2023.

It also does not shrink the Seattle Municipal Court, keeping its funding almost the same as last year.

Not Quite There on Investments to Alleviate Homelessness

The bulk of the spending on homelessness, $87.7 million, went to the King County Regional Homelessness Authority to fund its strategies for eliminating homelessness countywide. This comes in contrast to leaked comments that Harrell considered reducing funding to the KCRHA. That said, the Mayor did not fully meet the Authority’s $227 million requested budget, even with the County Executive’s proposal to give it $90 million.

The Authority’s budget proposal did not fully meet the demands of the Solidarity Budget, either. KCRHA is planning for six to seven RV safe lots, and the coalition wanted nine.

The coalition requested more than just money, too. They also had a policy demand: Stop the sweeps. Harrell did not mention sweeps or “removals” in the budget. He will, however, spend $300,00 on the “unified care team” which sends out cops, parks and recreation workers, and outreach workers to sweep encampments.

The City and Solidarity Budget seemed most aligned in their desire to fund the Vision Zero plan, which aims to eliminate pedestrian deaths. The Mayor added $1.3 million to the $6 million base investment to the plan. As the Solidarity Budget demanded, the City will prioritize the City’s only majority-minority district, District 2, which Harrell often refers to as “the best district,” for those funds. The budget proposed spending the money on making the Rainier Corridor safer, improving transit along Martin Luther King Jr. Way, and planning the 130th West project.

The vice chair of the council’s Transportation and Seattle Public Utilities Committee, Dan Strauss, said he did not know the cost to fully fund an end to pedestrian fatalities. But for a sense of scope, it costs about $2 million to build one mile of sidewalk, and building more sidewalks is one way to make Seattle more pedestrian friendly, reducing pedestrian fatalities by up to 88%. Harrell’s budget increase could buy new sidewalks for about 13 blocks.

No Change to Participatory Budgeting $$$

The City sets aside a pile of money that the community gets to decide how to spend through the participatory budgeting process. The Solidarity Budget demanded the City double the $30 million investment to $60 million, and then increase it every year by $5 million until it reaches $200 million. The Mayor’s budget kept the money in the participatory budget the same.

An Olive Branch on Housing

But the Mayor didn’t universally fuck up any #OneSeattle attempt to extend an olive branch to Seattle’s lefties. His proposed budget actually went above and beyond the coalition’s demand for housing. The Mayor’s proposal allocated $228 million for “multifamily housing investments,” and $17 million for “homeownership, sustainability, and weatherization.”

The Solidarity budget asked for $130 million for housing needs, including $100 million to buy existing buildings and secure 300 to 600 new units of affordable housing.

However, The Mayor did not include the Solidarity Budget’s demand for seed money for a potential social housing developer. The budget came up short on the coalition’s ask for a $5 million investment in tenant services, only allocating $400,000 to legal defense for renters facing eviction.

Pretty Progressive on the Environment

Lastly, the Solidarity Budget demanded a $23 million investment to fully fund the City’s Green New Deal, which aims to eliminate climate pollution in Seattle by 2030.

Through the JumpStart tax, the Mayor’s budget threw $20 million at policies inspired by the Green New Deal. This included $3.5 million to decarbonize Seattle Parks and Recreation facilities and to build “climate resilience hubs” in community centers.

The Solidarity Budget organizers and other community members who are unhappy with the Mayor’s budget can still pressure the city council to make changes. Tomorrow morning, the council will host its first budget committee meeting, and the public can voice concerns or praise during the 90-minute public comment period at 9:30 am.

We are 1 WEEK away from beginning the @SeattleCouncil budget deliberations for 2023/24. See the numerous ways to engage here! Given #COVID19, we are encouraging virtual participation and have carved out days for extended community feedback. Thanks for participating! pic.twitter.com/XjpDrg3iq8