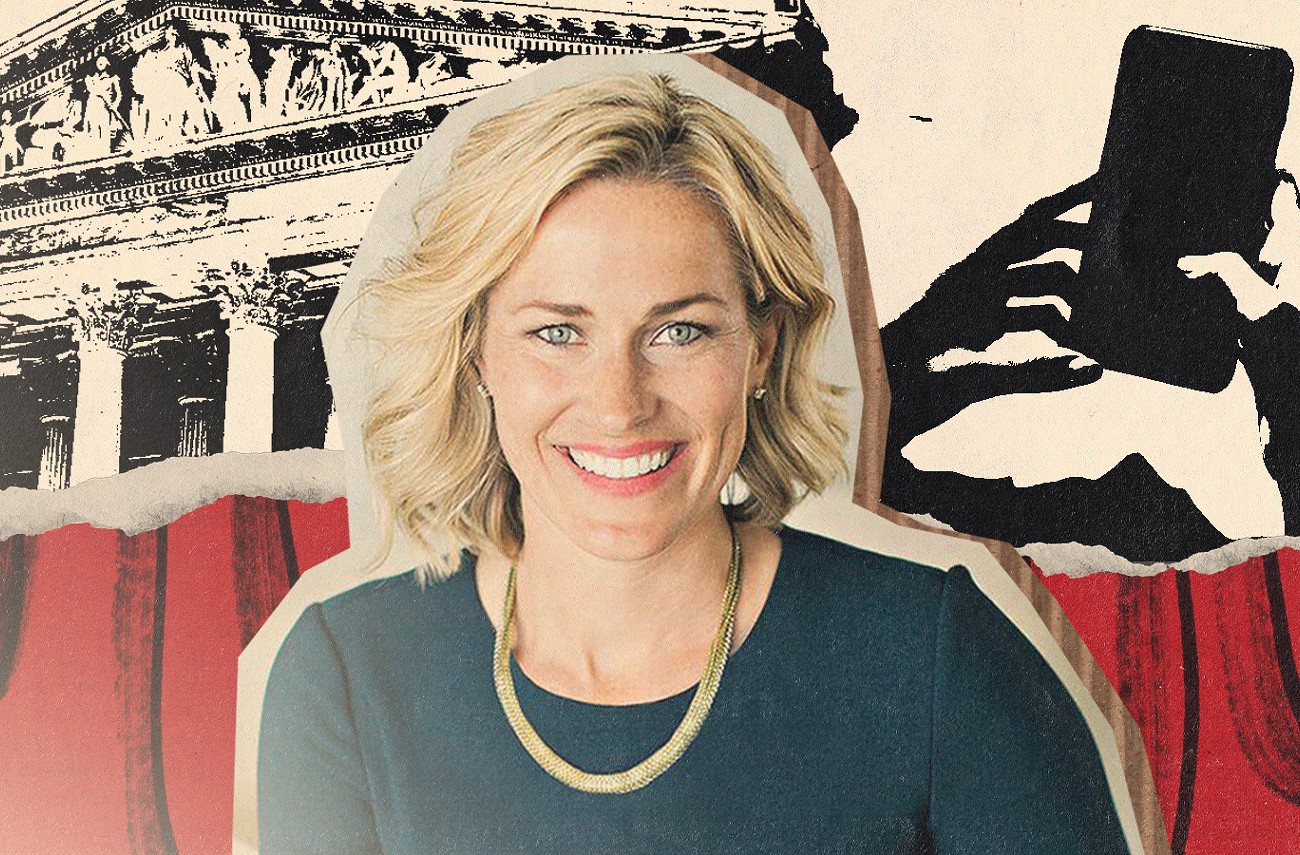 Trans advocates don't have much nice to say about Republican challenger Tiffany Smiley, especially after seeing what her account likes on Twitter Anthony Keo

Before she decided to take on Washington’s 30-year incumbent in the U.S. Senate, Tiffany Smiley’s Twitter feed looked pretty typical of a new-mom-in-town Republican. Her account’s list of “likes” included a lot of apparent support for blonde TV reporters, God, inspirational quotes from an account called Success Magazine, and tweets celebrating and advocating for anti-trans policy.

In 2015, Smiley’s account liked four tweets from Franklin Graham, an infamous, homophobic evangelical Christian who founded the Samaritan's Purse, which provides aid to other evangelists. According to LGBTQ Nation, Smiley has a close relationship with the Graham family. Her husband became friends with Graham’s younger brother at the military academy, and the families continue to show up on each other's social media profiles. Smiley and Graham still follow each other on Twitter today.

As anti-trans legislation crops up across the country, LGBTQ+ advocates say that Congress could hold the key to preventing discrimination against trans people nationwide. In Washington's Senate race, voters have the opportunity to keep Senator Patty Murray, who has demonstrated her support of queer and trans people, or replace her with Smiley, who apparently likes a bunch of transphobic tweets.

In the 2015 tweets, Graham expressed his outrage about Target announcing it would stop needlessly gendering store signs, cutting “boy” and “girl” qualifiers for departments such as toys, home, and entertainment. Smiley’s account liked tweets in which Graham called the decision “off-target,” asked the company to return to “God’s standards,” and clarified that those standards specify “two different genders.” Finally, Smiley’s account liked this gem:

Left wing science 101: a man with a penis is a woman but a human in the womb isn't a person.

In 2016, Smiley liked another tweet from Graham that supported a controversial North Carolina law to force trans people into bathrooms that do not align with their gender. While conservatives took up the cause under the guise of protecting children, studies show no evidence that allowing trans people to pee where they please puts anyone in danger. In fact, barring trans people from doing so may put them in danger.

I’m glad North Carolina has a governor, @PatMcCroryNC who will stand up for what is right and protect our children. https://t.co/vaN4dkZNNW

11 states led by Texas have filed suit against the Obama administration, challenging its transgender bathroom directive to school districts

In 2017, her Twitter likes began to suggest that she didn’t just want trans people out of the bathroom, but she wanted them out of the military, which would be cool if she wanted cis people out, too.

.@realDonaldTrump is exactly right about transgenders in military. I’m thankful we have a @POTUS who sees the truth. https://t.co/fpzD9bMJOx

Smiley did not respond to my request for comment.

In sum, if being a Republican was not indication enough, these tweets paint a picture of someone who is not likely to stand up for trans people on the Senate floor.

The Gender Justice League, a Seattle-based advocacy group for transgender, nonbinary, and gender non-conforming people, said the organization is “deeply disappointed to learn about these ‘likes’ by Senate candidate Smiley,” especially given the uptick in the demonization of trans people by elected officials.

Over the past few years, transphobes have gotten louder, and they’ve embraced legislation to limit the rights of trans people. Advocates named 2021 the worst year for state legislative attacks on trans people. Anti-trans bills showed up in just about every state, and a record-breaking 15 bills actually became law, blowing the previous year’s four anti-trans bills out of the water, according to the Human Rights Campaign. Advocates fear that state legislatures may end up shattering those records again this year.

“Much like is the case with abortion access, we have two separate countries when it comes to trans rights,” Gender Justice League Executive Director Danni Askini said in a phone interview. “There are people who live in ‘have’ states and people who live in ‘have not’ states. You can cross a border and suddenly lose all of your rights.”

The Equality Act Hangs in the Balance

While the federal government is far from immune from pushing anti-trans sentiment, Askini said Congress can serve as a last defense as some states become increasingly hostile. Right now, Askini said the biggest national priority is passing the Equality Act, which would amend the 1964 Civil Rights Act to add protections for people on the basis of sex, sexual orientation, and gender identity. That way, even trans people in red states would have federal protection from discrimination in “employment, housing, public accommodations, education, federally funded programs, credit, and jury service.”

The U.S. House of Representatives passed the Equality Act last year, but the Senate has yet to vote on it. Murray, who signed on to the act as one of 48 Democrat and Independent cosponsors, has advocated for the bill on the Senate floor and on Twitter.

LIVE: I'm on the Senate floor to speak out against the recent wave of hateful attacks on transgender youth happening across the country.

We all have a responsibility to stand up and make clear that this isn’t right. https://t.co/WvdA1ItL5g

Askini said, “Sen. Murray has long been a champion of equality for all, and her outstanding record stands in stark contrast to [the] divisive and cruel sentiments” that Smiley’s account liked on Twitter.

Even if Smiley had answered my request for comment, eager to correct the record and announce her support for trans people and the Equality Act, Askini said advocates for trans rights don’t get their hopes up about Republicans.

Democrats in the House voted unanimously to pass the Equality Act, but only three Republicans dared to breach the otherwise firm party lines to vote “yes.” Askini said the outlook seems even more grim in the Senate. Sen. Susan Collins of Maine signed on to the Equality Act as the only Republican co-sponsor. Her support could have helped encourage other swing voters to join the Democrats and avoid the filibuster in the 50/50 Senate, but Collins pulled her sponsorship.

Askini, who used to live in Maine, said Collins’s move shocked queer and trans advocates because she had been an open supporter of the community since the 2000s, even as a moderate Republican. However, Askini said a Republican’s personal support of queer and trans people is no match for Senate Minority Leader Mitch McConnell’s agenda. What he says goes, so even if Smiley felt personally invested in the well-being of trans people despite her Twitter likes, Askini said it is important to keep Democrats and to kick Republicans to the curb if we hope to pass the Equality Act.