Not Only Did the County Back Down from Its Strong Anti-NIMBY Stance, It Didn’t Even Please the Protesters 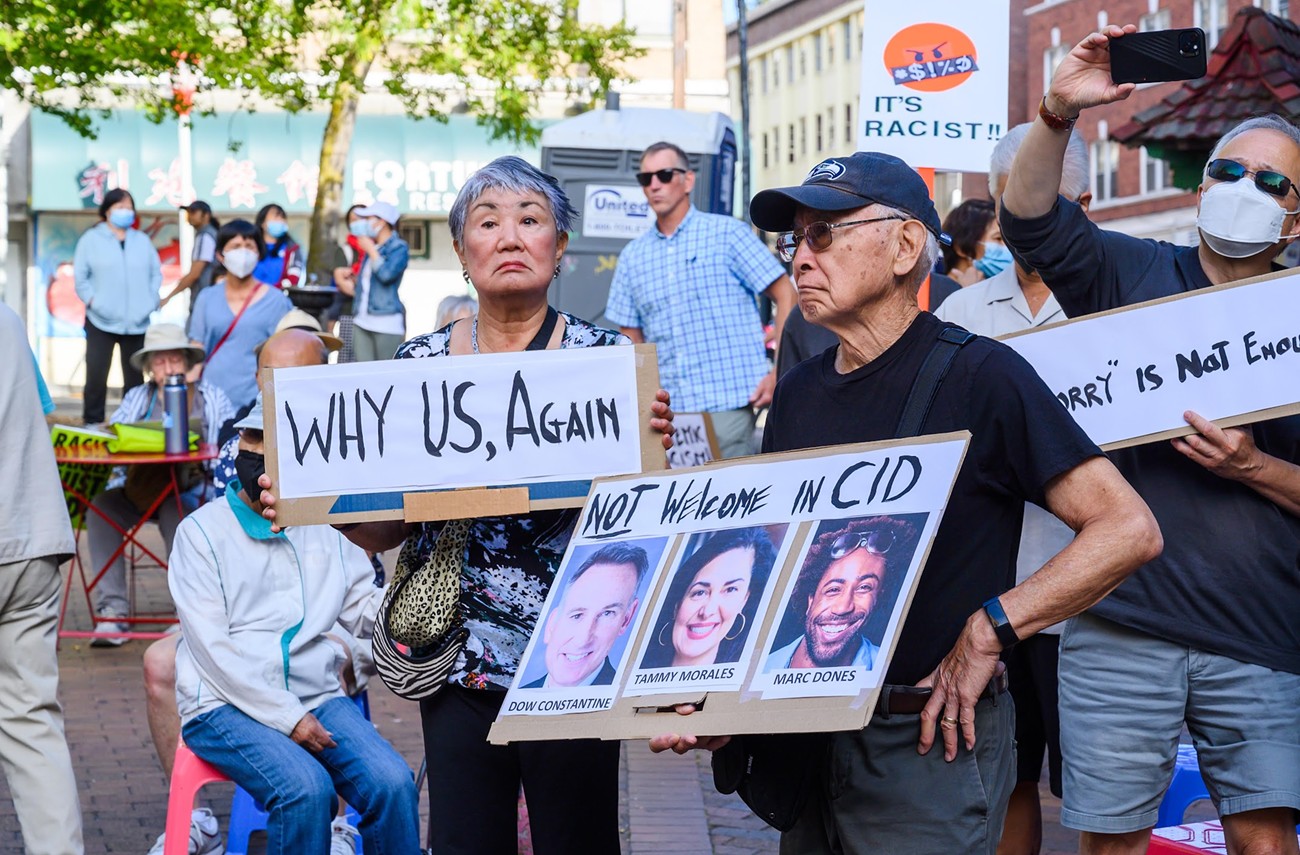 When the County canceled the shelter expansion, it looked like the protesters won, but CID organizers wouldn't call this a victory. RANDY WO-ENG

“The County’s not expanding the shelter,” I said, sitting crisscross applesauce in front of the empty building that, in March, King County slated to become an enhanced behavioral health shelter. The plan was, in part, to assist the people that the existing SODO Services Hub, which currently shelters 270, could not serve.

Three men sat on the small staircase leading into the building, eating snacks from the nearby gas station: John, who has lived at the SODO Services Hub for over a year, Jim, who has lived there even longer, and a third man who didn’t tell me his name but wore very cool sunglasses.

“Yes, they are,” John said, furrowing his brow.

Over the last several weeks, residents from the Chinatown-International District (CID) protested against the County’s so-called “Homelessness Megaplex,” an expansion to the SODO Service Hub on the outskirts of the neighborhood. Protesters argued the County didn’t do enough to inform them about the plans, which they said amounted to systemic racism.

At first, local officials didn’t budge, insisting that the severity of the homelessness crisis warranted marching ahead with the project. But on Friday, the County canceled the project in an effort to balance the “competing tensions” between the neighborhood advocates who rejected the additional shelter beds and the homelessness crises that demand them.

Unfortunately, the County’s sudden reversal does not seem to have pleased anyone—not the protesters who sought to engage with the process nor the people the shelter could have served.

No Shelter for the Encampment

With such a sudden change of course, John’s not the only person living in or around the SODO Services Hub who just found out that King County Executive Dow Constantine pulled the plug on adding 40 high-acuity shelter beds, 50 Pallet Shelters, and 60 spots at a sobering center that the County planned to move from Pioneer Square to the SODO Services Hub.

No one milling outside the shelter knew besides Jim. And Jim didn’t like it.

“It sucks,” he said. “That could have helped a lot of people.”

John, newly informed, added, “It’s good for the protesters but it's not good for homeless people.”

The two men agreed the expansion could have provided shelter options for the people living in the large, unsanctioned encampment across the lot behind a chain link fence lined with tarps and blankets for extra privacy. While no one had an estimate on the site’s headcount, John said the population swelled to about 100 people in the recent past, but some have slowly moved out after receiving shelter referrals from outreach workers.

While the protesters worried that a shelter expansion would bring more crime to the CID, John argued that people living outside in the unsanctioned encampment likely draw more complaints from the housed residents and local businesses. He said he’s sympathetic to the protesters' concerns, but thought they may be slightly misinformed. By his logic, more shelter beds would actually deter the very crime that the protesters fear it would usher in.

“When we hear people talk about why they are worried about a shelter, what they're often actually describing are the conditions outside right now,” said Leo Flor, the director of King County’s Department of Community and Human Services (DCHS). “And we know that shelter and supportive housing can actually be the thing that brings those folks inside.”

Last month, Flor said that the shelter expansion would help bring those living in the unsanctioned encampment indoors. Many of them used to stay in the SODO Services Hub, but their needs outpaced what the facility could provide without the addition of a behavioral health shelter. Now that the County canceled the plan, the future of the encampment is unclear.

In an email, DCHS spokesperson Katie Rogers added that case managers at the King County Regional Homelessness Authority (KCRHA) will continue to connect with people living in the unsanctioned encampment and work with them on their path to housing, even without a shelter next door.

Additionally, the cancellation means the county can use the money for the SODO expansion elsewhere. No word on exactly where, but in a statement last Friday, the County said it “remains committed to making funds available in any community in the county ready to quickly house or shelter residents experiencing homelessness, like in the Green River area of South King County.”

But what if no one wants a shelter in their backyard?

The protests didn’t surprise anyone I spoke to. (“Did you see the protests?” I asked. “Ohhhh yeahhhh,” someone responded, all but rolling their eyes.)

“There’s a clear divide,” said Kae, an unhoused person who occasionally stays at the unsanctioned encampment.

She pointed north. “After Uwajimaya, it's all housed people, and down here it's all unhoused people. For some reason, the neighborhood is not for both of us.”

But that physical and social divide is not unique to the CID. John said this is how every neighborhood reacts anytime the government tries to do something good for homeless people. When the County bends to one neighborhood, it could embolden every neighborhood to shout “not in my backyard” from the rooftops. And areas like Wallingford really do not need any more emboldening after their neighborhood of Sears catalog homes won historical distinction.

DCHS did not directly answer my question about what precedent it sets for the County to back off their strong anti-NIMBY sentiment, but the spokesperson did share a lesson learned from the experience to apply to future shelter projects. She said the situation “highlights the importance of building coalitions that will support faster action to shelter and house people everywhere in the county” and “reinforces the importance of early and sustained partnership in addressing our communities’ most pressing challenges.”

The County Did Not Beat the Racism Allegations

In a decision that has delayed or potentially cost the County more than 100 shelter beds, and weakened their position against neighborhoods against shelters, the cancellation didn’t even appease the protesters.

Tanya Woo, a CID resident who helped organize many of the protests, wouldn’t say that the County’s cancellation amounted to a victory. She said that the decision failed to address the neighborhood’s demands for better community engagement for such projects. Protesters claimed the County hadn’t done enough despite hosting two public meetings, consulting with community organizations, and at least one protest organizer attending a meeting that was part of the County’s outreach efforts.

Despite some classic NIMBY talking points sprinkled throughout the movement’s rallies and a strong alliance with the King County Republicans, Woo said the protesters did not seek to fully cancel the shelter. Initially, both Woo and Flor said that the organizers asked the County for a six-month moratorium on the project to allow for proper stakeholdering, but officials denied the request because the community could still provide feedback for many important, undecided aspects of the project. In an email after the cancellation, the DCHS added that much of the funding for the SODO Services Hub is “term-limited, one-time federal funding,” so if the County waited, they would lose out on the money. Without the time to do enough outreach to please the community, the County had to move on to another project or lose the funding.

Woo said that the cancellation “continues the history of racist policies,” because the protesters gave the County the opportunity to work with the community to add the additional shelter beds, but instead of seeing CID protesters as partners, Constantine just canceled the whole project, excluding the neighborhood again.

“The fight’s not over. We're still fighting for appropriate, culturally competent outreach and engagement for all future projects. We don't want to have to continue protesting every single year and having these high-impact projects put in without our consultation. So we're gonna be fighting for just a bit longer,” Woo said.

The DCHS spokesperson said the County will “continue conversations with community members in SODO, the CID, and Pioneer Square regarding the existing shelter, and how we can ensure it remains successful.”

With the County disappointing protesters and some SODO Services Hub residents, the two groups agree on one thing: A shelter will not solve the homelessness crisis.

“It’s like putting a Band-Aid where you need a suture,” said Michael, who lives in a structure of cardboard boxes outside the SODO Services Hub.

He said he wouldn't stay there even if the County built the expansion. Kae agreed, saying past shelter experiences left her traumatized. Not even the tiny shelters, typically the most desired form of shelter, appealed to either of them. They had both heard horror stories from other unhoused people about the strict rules in the tiny shelter villages. If they go inside, they both said the offer would have to be their own, permanent unit.

Woo also acknowledged that shelters don’t work for everyone. “What if you have a fur baby?” she asked.

Woo said that on the bright side, now the County can look into spending the money on other solutions like permanent housing, which many, including the KCRHA, recognize as the only true path to stability and self-sufficiency.

Will the CID protesters pick a fight if the County tries to put that more permanent solution in their backyard? Woo said she’s a believer in housing as the solution to homelessness and she’ll support more affordable housing in the CID—as long as the County includes the neighborhood in that decision.