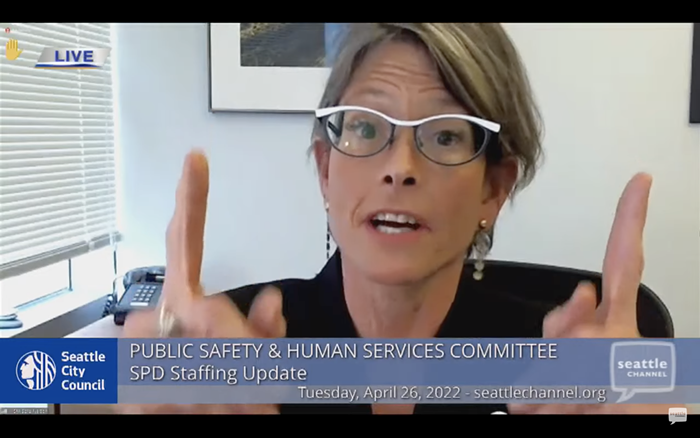 "It's me, hi, I'm the problem" etc. Seattle Channel Screenshot

A sitcom enthusiast might describe yesterday's episode like this: "Tuesday’s meeting featured an ensemble cast, with nine council members driving the conversation pretty equally. But in Wednesday’s meeting, the newest member, Council Member Sara Nelson, stole the show by reviving her iconic role as the council’s designated concern troll. Here are some of her best moments on the silver screen" (the Seattle Channel lol).

Her trolling departs from the almost painfully cordial behavior of other council members, but we’ll see if it pays off with any wins for the conservative faction.

In the 2021 elections, Nelson distinguished herself from the progressive council as a “pragmatic progressive.” So far in budget negotiations, “pragmatism” means leveling a bunch of knee-jerk ideological criticism in the form of needling questions, much to the chagrin of some of her colleagues, who sorta just want to introduce amendments as quickly as possible.

The first fight Nelson picked offers a good example of her pretending to champion the needs of the people while covertly defending the interests of big business.

When Council Member Teresa Mosqueda proposed to give $1.5 million in JumpStart payroll tax revenue to the City’s Department of Neighborhoods (DON) for a study on addressing Seattle’s racial wealth gap, Nelson said she needed “no convincing” about the importance of building general wealth. However, she argued, the amendment sounded vague to her, and so she asked for more specifics about which kinds of solutions the DON report might find. Council Member Tammy Morales gave her a few: Community-controlled capital, community ownership of real estate, worker ownership, and universal basic income.

Though she appreciated the examples, Nelson remained unimpressed with the amendment overall. “We’re supposed to be helping our constituents, and so I just want to make sure that there will be actual resources provided,” she said, in an attempt to sound like she’d rather put money or other resources directly in peoples’ pockets rather than fooling around with some study.

Mosqueda clarified that the DON needed the money to build a plan to directly help constituents build generational wealth, perhaps keenly remembering that time big business killed the council’s head tax by accusing them of having no spending plan. When members eventually try to advance a proposal to help build wealth, the council will need such a plan to avoid similar criticism from conservatives like Nelson. But “pragmatic” Nelson can’t just come right out and say she doesn’t want the plan because she doesn’t want the council to be able to justify spending money on poor people later on, and so she’s doing this dumb politics thing.

Nelson went on to ask another inconsequential clarifying question and Mosqueda, devoid of her usual chipper tone (which could rival that of a flight attendant), said “I’m gonna move on.”

Despite the ideological subtext of her commentary, Nelson appointed herself the council's chief policy cop when things started sounding too abolitionist during talks over jail contracts between the City and County.

During the meeting, Council Member Lisa Herbold proposed an amendment that would make the Mayor try to swing a better deal with the County on jail beds that the City doesn’t end up using.

It's not outlandish for the County to refund the City for stuff like this. In 2020, the Council convinced the Mayor to work with the County to recoup some of the jail bed costs associated with inflation, and it resulted in $16 million in savings over two years, Herbold said. Her amendment would establish that same kind of agreement between the new Mayor and the County so the City could use this otherwise wasted money on upstream solutions to prevent incarceration.

Nelson said she’s fine with saving money on jail beds if Harrell can sweet-talk the County, but she finger-wagged conversations about upstream solutions.

“That is a policy conversation,” she said. “We have to be careful about not encroaching upon the authority of the City Attorney's Office and the courts.”

Herbold disagreed that the amendment encroached on anyone’s authority or on jail-holding policies, as it didn’t change the number or the kind of people City Attorney Ann Davison can stick in jail.

And also, of-fucking-course policy will come up in budget discussions. Isn’t this shit the City’s moral document, communicating its priorities with its dollars? Herbold didn’t say that, but I wish she had.

While most council members only piped up this week to try to partner on bills, Nelson just couldn’t resist spending time rehashing some drama from yesterday under the guise of merely offering her best advice as the house pragmatist.

Morales proposed spending $455,000 to pay for improvements to the community-led Climate Resilience Hub, which is a safe space on Beacon Hill for people to go during climate emergencies. Morales said the organization would use the money to make energy efficiency improvements to the building, pay for battery storage to deal with up to two weeks of power outages, and pay for first aid and other emergency supplies. After outrage online over the City’s lackluster response to the heat and smoke earlier this month, it seems public support for this kind of investment would be at a high.

But, by God, it better be JumpStart paying for it, as far as Nelson is concerned.

“Is this something that could potentially be funded by JumpStart instead of the general fund, because clearly I'm interested in making sure that the items that might not be in alignment with JumpStart do have funding,” she said.

Fair question. But, as central staff reminded her, that’s more of discussion for next week, when Mosqueda writes her first edit of the Mayor’s budget. The comment mostly just reignited a tiff from yesterday when she and Council Member Alex Pedersen expressed concern about the Budget Chair not wanting to give the Mayor permission to use JumpStart for non-Jumpstart priorities. Still, Mosqueda took Nelson’s suggestion in good faith and thanked her.

Mosqueda did not thank Nelson for any suggestions in their long, central-staff-moderated debate about renter protections, that’s for sure! It got so bad that her council colleagues wondered if she was asking questions out of genuine curiosity or to simply imply her lack of support.

During this round, Mosqueda proposed spending $3 million on rental assistance, which the low-income legal defense organization Housing Justice Project (HJP) said would help cover costs for most of the people the City fucked over by ending the eviction moratorium.

Mosqueda thought that was a “relatively small” amount to pay to keep people housed, but Nelson disagreed. It’s not a small amount, she argued, especially on top of other allocations to support renters on the docket for the meeting. She expressed a “strong statement of bewilderment” about the amendment routing the money through the Seattle Department of Construction and Inspection (SDCI) to community organizations and then to the people in need, rather than just sending it directly to people who are behind on rent.

Unfortunately, Mosqueda cannot go around like some eviction fairy godmother and bail people out. The money has to go to a department like SDCI, which has the capacity to find fairy godmothers such as HJP or some other organization that works with people facing eviction. And, as Herbold said in the meeting, the proposal does not fund general operations at these organizations, but rather it “specifically funds the needs of tenants who are facing eviction because of non-payment of rent.”

But it didn’t end there. Nelson also took issue with Council Member Sawant’s next proposal, which would spend about $570,000 on eviction lawyers. That staff is crucial to preventing evictions because tenants need to go to court to make use of the council's tenant protections.

Nelson didn’t like it. She took issue with the fact that the City would be paying for staff (eviction lawyers) instead of paying people’s rent to stave off eviction. She then asked “if there’s any appetite” to “ask these organizations to just get some money so that [tenants] are not evicted,” directly contradicting her “strong statement of bewilderment” against giving organizations money to prevent evictions.

This conflict reveals that Nelson’s desire to help renters ends when it does not also help landlords. She wants rent assistance because that bails out landlords, and she’s even fuzzy on that if the money is being distributed by pro-tenant groups. Meanwhile, other members of the council want eviction lawyers to help make sure tenants can access the council’s protections and avoid eviction for reasons other than non-payment.

After pushing buttons half the day, Sawant called into question whether or not Nelson’s questions were “genuine.” As negotiations continue to heat up, we’ll see if Nelson’s concern trolling scores any budget wins or just groans from her colleagues.