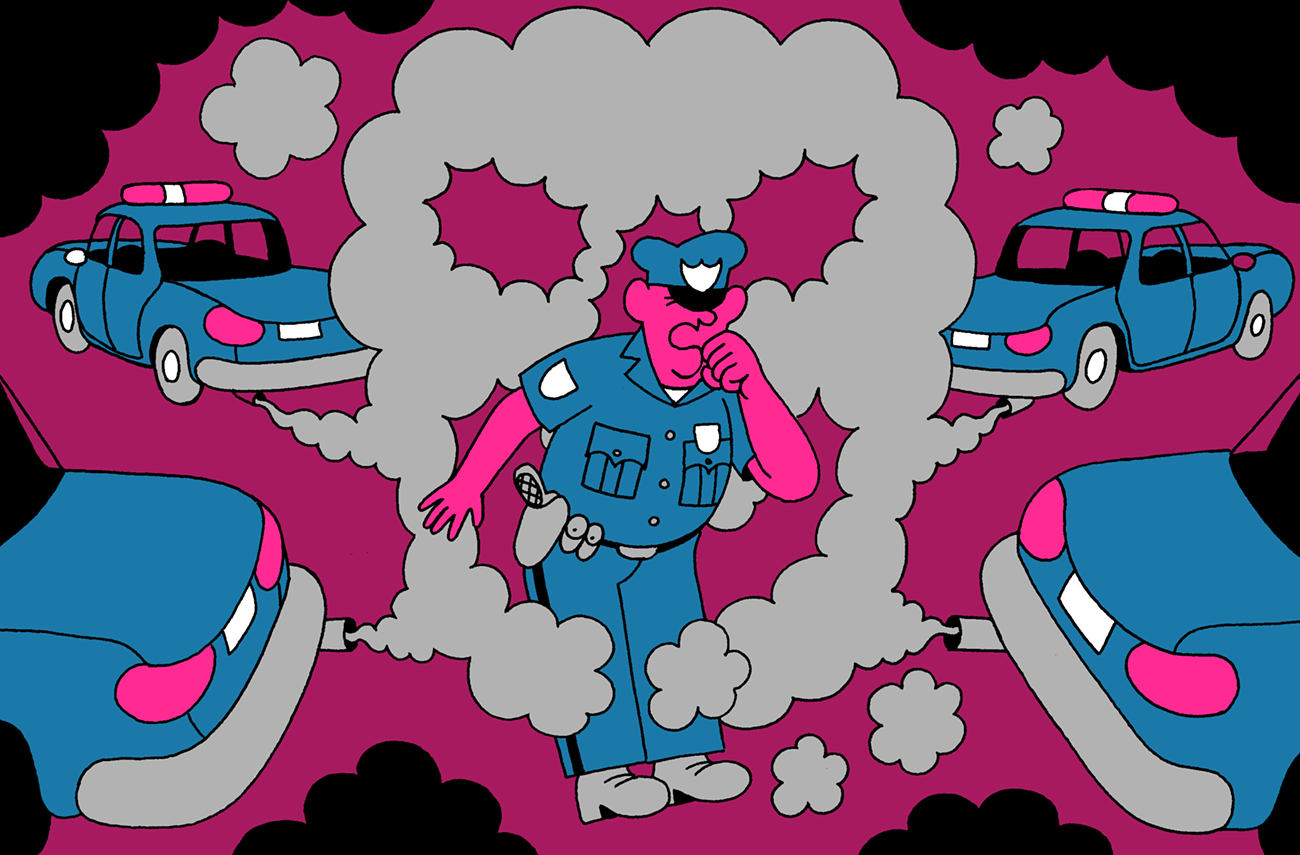 Instead of giving one cop an outdoor parking space, a lawsuit showed that SPD allowed officers to bully him for years for demanding clean air. Pete Gamlen

According to the jury in a recent lawsuit, protesters aren’t the only ones the Seattle Police Department has hurt with toxic gas. After finding SPD negligent for failing to protect a sergeant in the downtown precinct from getting carbon monoxide poisoning on the job, the jury awarded the cop $1,325,000 in damages.

The cop’s lawsuit stems from years of internal complaints about poor ventilation creating unsafe levels of carbon monoxide in the precinct’s patrol garage, where officers spend anywhere from 15 to 45 minutes at the beginning and end of their shifts. After the cop, Sergeant David Hockett, resorted to suing the department over its failure to fix the issue, the department finally accommodated him by allowing him to park on the roof of the garage.

But it shouldn’t have required two-and-a-half years of litigation and a million-dollar verdict to resolve this workplace hazard. SPD’s decision to fight Hockett’s lawsuit instead of fixing the issues Hockett brought to the department’s attention raises questions about senior command staff’s commitment to retaining their cops amid a staffing crisis.

“They Are Literally Being Poisoned”

In 2017, SPD became aware of an issue with newly purchased police cruisers that allowed car exhaust to seep into the passenger compartment. The department notified its cops and told them to report any symptoms of possible carbon monoxide poisoning, such as confusion, headaches, or dizziness. Sgt. Hockett, who said he had been experiencing all of those symptoms and more, responded to the email saying he and a team of doctors had been trying to figure out the cause of his illness and was relieved to learn of the likely source.

But as Hockett soon discovered, the new cars weren’t the only problem. The ventilation system in the underground garage where he parked his patrol car wasn’t bringing in enough fresh air to push out the exhaust from cop cars idling during shift changes.

The cops said they left their cars idling due to computer issues. At trial, witnesses from within the department testified that computers in the precinct’s report-writing room took a long time to boot up, so cops frequently sat in their cars and typed out their reports using the already-booted-up terminals in their vehicles. Because the computers drain the car’s batteries, the department installed an aftermarket system called IdleRight that automatically turned on the car’s engine when the battery needed charging.

After an officer filed an anonymous complaint about the exhaust issue with the state’s Department of Labor & Industries, which regulates workplace safety in Washington, state investigators conducted a comprehensive inspection of the garage. They found the ventilation system was faulty and issued three recommendations to SPD: upgrade the ventilation system to handle the elevated levels of car exhaust, install carbon monoxide monitors to keep track of the exposure, and prohibit cops from spending excessive time in the garage.

While SPD did comply with the first two recommendations, Hockett’s lawyers produced evidence at trial that showed the department hadn’t really done much to discourage cops from hanging out in the garage. In fact, they set up a foosball table and ping pong table directly in the path of an idling car’s tailpipe, which Hockett’s lawyers captured on video:

In a statement, the department said it “encourages all employees to be proactive in identifying safety concerns in the workplace.” At trial, however, senior officers within SPD struggled to follow the department’s advice.

Hockett’s lawyers cross-examined several members of SPD’s command staff about the video. Despite the brake lights from an apparently running car reflecting off of the ping pong table, not a single one said they could clearly identify whether the car was idling and therefore presented a safety concern.

One of Hockett’s lawyers, Sumeer Singla, said in a phone interview that SPD has since removed the foosball table but, as far as he knows, the ping pong table remains in the garage. I asked SPD for any additional information on steps the department has taken to keep cops from breathing toxic air in the garage, but they did not address that question in their statement.

SPD’s “head in the sand” approach to officer safety led Singla to tell the jury in closing arguments that “[f]or 15 minutes after shift change, there are officers who are not in the best condition they need to be patrolling the streets ... because they are literally being poisoned for the 15 minutes before they leave.” The jury agreed, finding SPD had been negligent in protecting Sgt. Hockett from carbon monoxide poisoning at work.

Taking a step back, it’s natural to wonder why this issue required litigation at all, much less two-and-a-half years of what Singla called the “most aggressive litigation tactics” he’d seen in 20 years of practicing law. In Singla’s opinion after spending years investigating this case, the “hostile” treatment Hockett endured after raising complaints traces back to SPD leadership’s refusal to accept or tolerate criticism from their rank-and-file officers.

At trial, the jury also agreed with Singla on this point. Of the $1,325,000 in damages the jury awarded Hockett, they specifically attributed $1 million to the hostile work environment Hockett suffered once he began advocating for the health and safety of his fellow cops. Despite Hockett’s excellent track record of service in the department, including several commendations and awards, command staff fostered a toxic culture that ostracized Hockett within the department and tagged him with the nickname “Mr. CO,” which is the abbreviation for carbon monoxide.

The punitive treatment Hockett received at work for taking steps to avoid breathing toxic gas, like reaching out to the IdleRight vendor for clarification on whether the system was designed for use in an enclosed garage (it’s not) and relaying that information to his bosses, went far beyond name-calling.

Cops at the downtown precinct ridiculed Hockett for his obsession with wanting to breathe clean air at work, leaving images like these around his work area. Command staff even intimidated Hockett for reaching out to the IdleRight vendor and installing his own carbon monoxide monitors. They ordered him to, as Singla put it, “shut up and get in line.”

A Hole in the Blue Wall of Silence

After Hockett filed his lawsuit, SPD’s human resources department finally granted him an accommodation so he didn’t have to park in the toxic garage any longer. Well, at least for a time.

In a demonstration of SPD leadership’s recalcitrance throughout this entire ordeal, Hockett’s open-air parking space was temporarily revoked just two weeks after he got it. He only regained the accommodation after yet another complaint to human resources. If this is making you wonder whether, perhaps, mean statements from City Council members in 2020 doesn’t amount to the sole reason for attrition within the department, then you’re not alone.

Several of Hockett’s fellow cops took the stand to tell the jury that while Hockett might be out of harm’s way, they still don’t believe it’s safe for officers to spend time in the downtown precinct’s garage. They apparently considered it a serious enough issue to risk their career prospects within the department, and said as much in open court.

While it’s extremely unusual for cops to break rank like this and openly criticize their superiors, one final detail that emerged at trial helps to explain why they apparently felt compelled to do so.

Those officers testified that the garage isn’t the only place where they’re breathing unsafe levels of carbon monoxide. Because of a hole in the wall of the sergeant’s workroom adjacent to the garage, the toxic gas has also been leaking into their office space and apparently causing the same headaches, dizziness, and confusion that the cops suffer when spending time in the garage between shifts.

The cops who work in that space eventually used tape to try to seal the hole. That solution worked for a while, but, according to testimony at trial, the tape soon disappeared without explanation.

To be sure, some cops make it a point to blame local politicians for their decision to leave on their way out the door. But all of this needless conflict over fixing a basic workplace safety hazard should make you pause the next time you hear newly minted Chief Adrian Diaz, who served as interim chief the entire time Hockett was suing the department, blame local politicians for SPD’s staffing crisis.

After all, Diaz had the opportunity to lead by example and demonstrate what supporting rank-and-file officers looks like, but instead he chose to fight Hockett’s lawsuit and leave his officers to breathe toxic gas on the job until a jury told him that doing so broke the law. Now, taxpayers are on the hook for more than a million dollars as the price for that stubbornness.