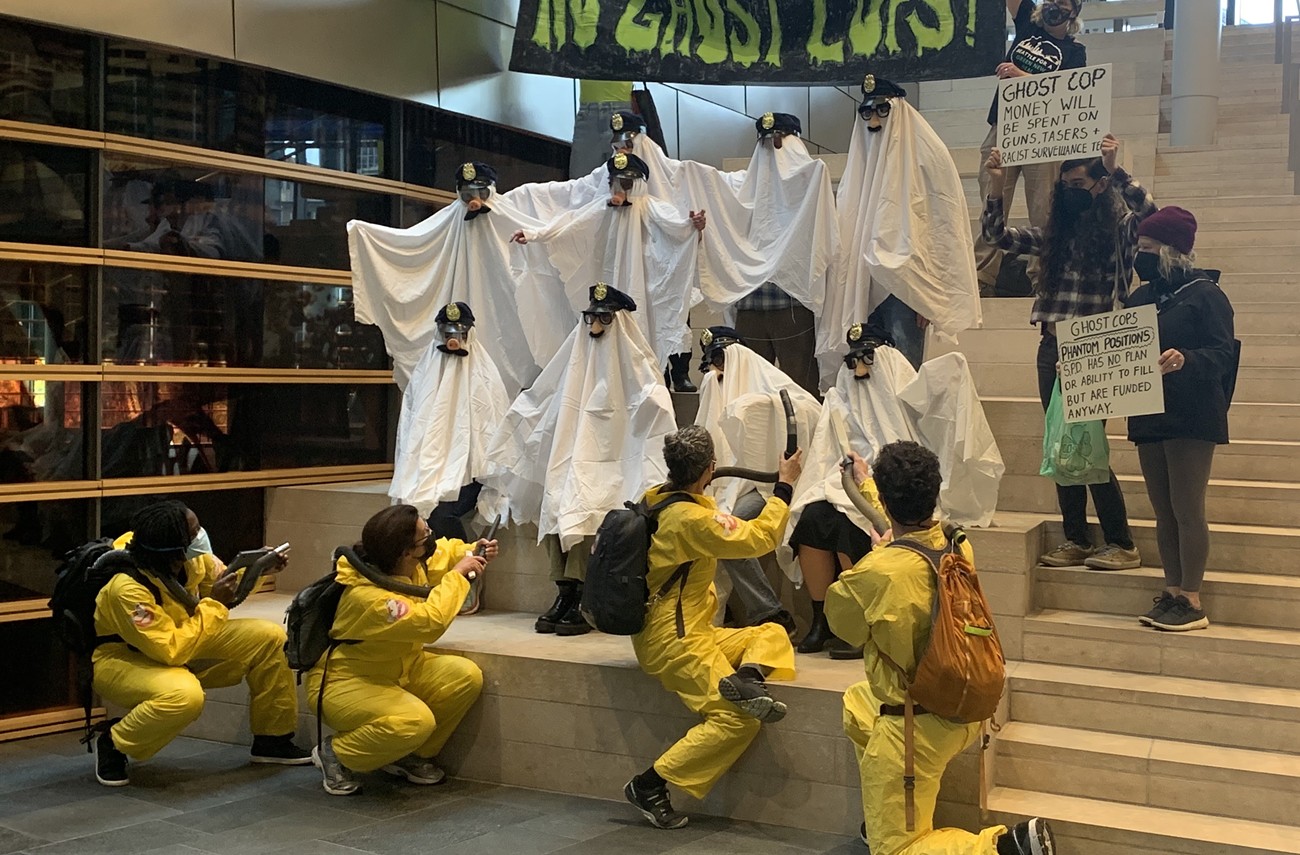 On Halloween, a bunch of lefties dressed as "ghost cops" and haunted City Hall. HK
Back to article

Sweeping begets opportunities for change and better decisions, healing of the environment, alleviates crime, and pays tribute to our humanity and compassion.

Blaming the current mayor for deaths of people whose lives are in deep distress, and are camping as a result, is absurd. One could as easily blame the current and prior mayors and councils for the deaths by permitting camping and drug abuse rather than setting clear limits and consequences on death-inviting behaviors.

No matter, those at these demonstrations have themselves as their prime audience. The general public is not stupid and can learn from our prior mistaken beliefs and assumptions, as well as the persistent lies that have been advanced on the nature and cause of street homelessness and the choices, history and transgressions of those who have settled on our streets and rights-of-ways.

Looks like four of the 'Ghost Cop' performers have pig noses for their 'Groucho' disguises.

Nice job, Solidarity Budget dipshits. I wonder what tune you'll be singing when you call the police to get a resolution for your stolen bike, catalytic converter, or - god forbid - some crazed vagrant, druggie or gang-banger causes you or someone you care about bodily harm.

I look forward to the day when your Covid Relief money runs out, rent moratorium ends, and you have to pay your student loans. Then you'll have to start working more rather than indulging in your inane, naïve street theater.

“The organizers hung signs displaying some of the names of 191 unhoused people who have died during the Harrell administration. Mutual aid workers from Stop the Sweeps… used brooms to brush red paint over the names to illustrate that sweeps kill.”

How, exactly, do “sweeps kill”? What was the connection between Mayor Harrell and these deaths? Persons have died in un-swept encampments; were those deaths recorded as “no sweeps killed”?

How many human beings have died in Seattle’s unswept encampments? Does anyone from Solidarity Budget know or care?

I wait with much anticipation two things:
1. Seattle adopting a "No unsanctioned encampment ordinance", as uber-libral Portland has done.
2. The federal court ruling on the ADA lawsuit against Portland for allowing encampments to block sidewalks.

@5: No need for your proposed ordinance. Seattle already has laws against trespassing on public property, but previous City Attorney Pete Holmes refused to prosecute. Between that change in office, and Mayor Harrell’s sweeping policy change, Seattle’s citizens should soon be able to enjoy all of their parks and other public spaces.

"Seattle left"? Well I'm a lefty liberal and I certainly don't want the sweeps to stop. Thank god Pete Holmes is gone. Sweep sweep sweep. As @4 said, blaming these deaths on sweeps and Harrell is misleading and progandizing their deaths. For shame. Those encampments themselves are hazardous to the residents health and the publics.

What will it take for progressives to realize how unpopular their positions are and how counterproductive their idiotic protests are?

Sadly, that promised series of risibly self-inflicted own-goals may now never happen, not because the Stranger learned anything from crushing citywide defeats, but because after her own second citywide defeat, Oliver invoked the almighty Take My Ball And Go Home (Or, At Least, To Detroit) rule.

On Wednesday AM I want all of the "defund" idiots to publicly apologize for their role in the likely loss of the House of Representatives. After which they can all fuck off.

instead of ghost cops they should have went with ghost council members since most of them still don't bother to come to city hall anymore.

You would think at the very least this spoiled bunch of (trust fund?) dilettantes could come up with an original way to do activism? The street theater and chants is sooooo 1960s (what do we want? a fucking original thought! when do we want it? now!). On top of that, they're not even that effective.

City Hall looks empty. I know urbanists are all about the “neighborhood renaissance” but I think de-platforming downtown like this is a blow to efforts to be visable to community, by activists such as these, and others.

I am moved and take hope from the about face of the small sampling of Stranger commenters. Two years or so ago, the majority would be aligned with the demonstrators. Now virtually all have seen the lies and propaganda of the left for what it is, and support sweeps and are dismissive of the demonstrators and vandals plaguing our city and region.

Now The Stranger is hardly a scientific sample of the community. Could be the diehards leftists have just retreated. Or it could be they have shifted their position. In any event, take heed electeds. It may be too late to get reelected based upon your record, city council members other than Nelson. But perhaps an act of contrition and getting lucky with an unattractive opponent might give you a fighting chance. And prospective candidates - we the voting public really want to see viable, electable options. We will send you money and votes.

Shame on those in the labor left who funded those who have contributed to the destruction of our city, and your future prospects as workers in a region facing decline in quality. I mean you SEIU, SEA and others. Read the tea leaves and listen to your members. And business and centrist constituencies, don't sit out the upcoming council races like you did the last time for fear of offending. Labor got what they paid for. Time to give them a run for their money if they don't retreat going forward.

Lastly, things have gotten so problematic that neighboring Oregon may elect a GOP governor, and congress may go that way. We in Washington need a non-crazy GOP gubernatorial candidate who does not kiss Trump's ass and is a moderate on social issues like abortion. Inslee is an intellectual lightweight who has hitched his fortunes on doing the bidding of labor, over and over, as if an involuntary reflex. Goodness knows neither Obama nor Biden felt highly enough about him to throw him a national role. One can dream we see another Dixie or Evans running our state.

What's next a pantomime! God what a freak show.

Followed by this lame Sloggy Stranger Review which somehow equates the massive failure of the acts perpetrated on this city by the seated Silly Counsel ...... on the incoming Mayor. Here's a tip... "own your mistakes!"...which none of the city counsel members have done... let alone apologize for the hot mess they have made of this city.

Its high time to sweep away the fog of lies and and misdirection of the far left and restore order to this once great city. Drive the current batch of far left, liberal clowns out of the city counsel and lets get some center party democrats who represent the people and common sense in the next elections.

@15: “Now The Stranger is hardly a scientific sample of the community.”

The decline in supportive commenters appears to be mostly about the Stranger’s waning influence, recognition by the now-departed commenters that the party’s over for “progressives,” and that pragmatic liberals still care enough about Seattle to come here and oppose the Stranger’s contrafactual messaging.

“We in Washington need a non-crazy GOP gubernatorial candidate who does not kiss Trump's ass and is a moderate on social issues like abortion. […] One can dream we see another Dixie or Evans running our state.”

Thirty years ago tonight, the last “moderate on social issues” candidate the GOP ever submitted for WA gubernatorial office lost — to Mike Lowry, who was, back then, considered a crazy lefty-liberal. Since then, the local GOP has nominated a Christian-Right fruitcake, a radio talk-show host, a real-estate swindler, the same real-estate swindler again, and then some fools I cannot even be bothered to remember, en route to the high-school dropout who lost last time.

Already, by the time that long-ago night came around, Dixie Lee Ray had been out of office for a decade, and Dan Evans was a well-established attorney in downtown Seattle. I strongly suggest you not waste your time pining for the once-sane past of the WA GOP — or of the Stranger.