Shelters, Sidewalks, and Bridge Maintenance Will Have to Wait 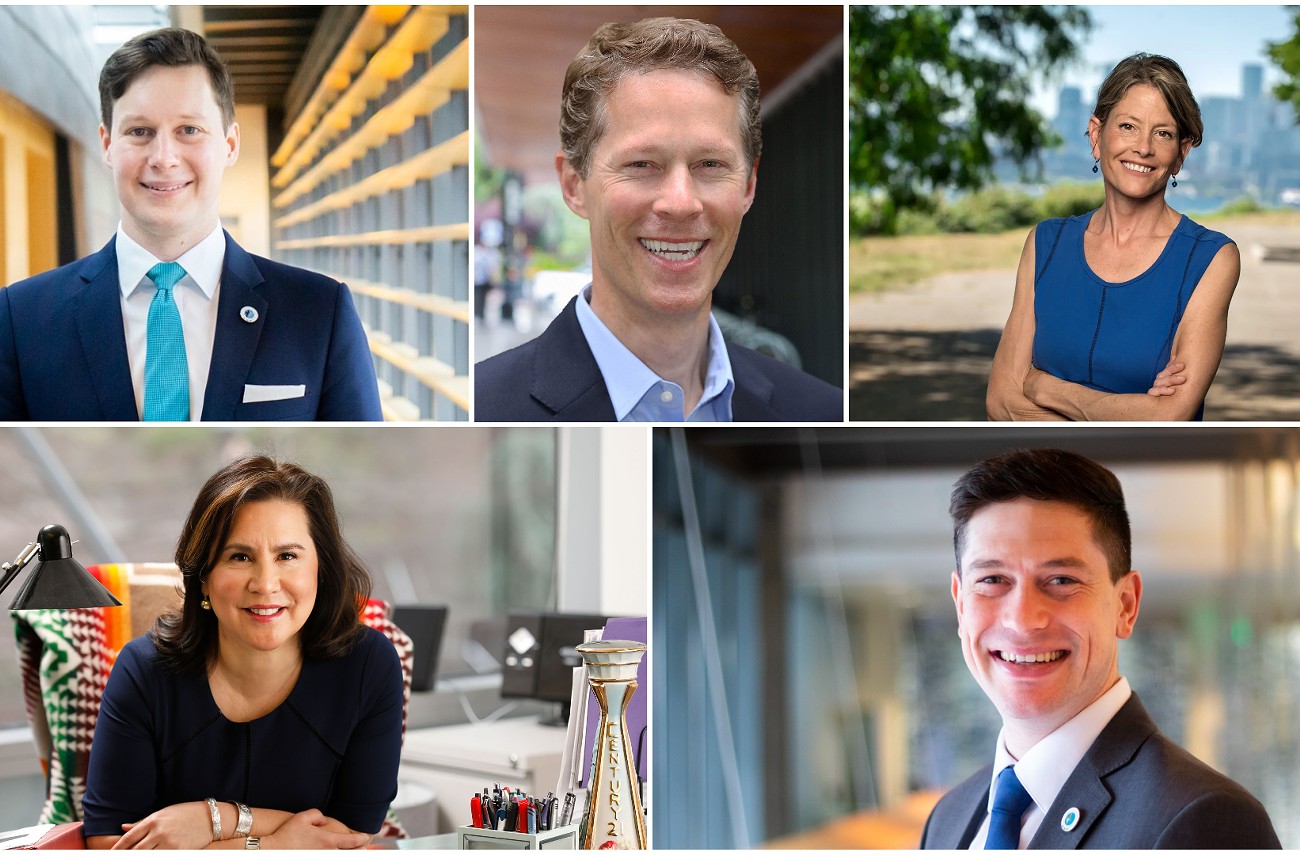 These five people should be on your shit list until November 2023. City of Seattle
Back to article

“ Hope Amazon sees this, bros, because this vote could cost the Democrats support from Seattle’s left. ” ???

Is there really any risk that Seattle progressives hold sway over Democrats’ success? Where? Municipal politics are not partisan, there’s a wide range of who is a Democrat, and push come to shove, folks will vote against a scary candidate from the other party and not so much a risky/progressive candidate from their own. See also 2020.

Appreciate the Budget write up!

@1: There is absolutely no chance a far-left candidate could cause the lefty-liberal incumbent to lose the primary, thus creating an opening for a more-conservative candidate to win in the general.

The city budget process is simply amazing to watch.

Now comes the City of Seattle and the "silly council"...who would never even think of cutting back or being more efficient... Oh, no we couldn't do that... its unthinkable. Layoff an employee... never.

Instead they look for more taxes and as always business is the whipping boy... or landlords. Its really simple, cut back on services, be more efficient and lay off some employees... Its not rocket science...

By the by... I'm laughing at all the "progressive members of the city council" who have now gone into a duck and cover mode and are trying to rehabilitate themselves after defunding the police....

Ha.... "cost support from Seattle's left"... you mean socialists that have the zero political credibility?

Seattle is as blue of a city as there is in the U.S., baby. The socialists are throwing a tantrum because "blue" doesn't equal "far left." Better get used to it. And, in fact, when faced with voting for left-wing nut jobs (like NTK), Seattle will reject the crazy, baby.

Last time I checked, no one from "solidarity budget" was elected to anything in this city. In fact, their political views were soundly rejected during the last mayoral/city council elections. But keep carrying the "solidarity" water.

Obviously Sawant will be our next Mayor.

I love the narrative that businesses aren't paying their fair share and this is a "tiny tax" on them (Sawants words). In fact if you want to listen to the comments Socialist Alternative wrote for her to speechify go to 5:12 of the meeting: https://www.seattlechannel.org/BudgetCommittee?videoid=x144217. She opines there is no budget crisis, in fact it's all manufactured because Seattle is flowing with money. She then goes on to state all business are raking in massive profits (as usual she intermixes revenue with profits because she is PhD economist who doesn't know anything about economics) while once again referring to this as the "Amazon Tax". It's so tiresome and trite at this point.

The real truth is the city has 4 primary revenue sources (B&O tax, Real Estate Tax, Sales Tax and Utility Taxes). These taxes make up 70% of the city's revenues on average as the wonderful Kevin Schofield used to detail:
https://sccinsight.com/wp-content/uploads/2021/10/GF-total-revenues-trend.png in his blog SCC Insight (man I wish he was still doing that) and the business community pays into each of them. In fact business taxes make up almost 2/3 of the city's general fund.

In a recent report released by the Econnorthwest it was shown that the city's general fund has grown 4x faster than the economy and population (https://downtownseattle.org/app/uploads/2022/11/ECONW_Downtown-Seattle-Assoc_study_hi-res.pdf). In fact since 2013 city revenue has grown 94% while employment grew 19% and population 22%. Some of this is voter approved levies earmarked for specific things but others are council imposted items like jumpstart, the soda tax and the AirBnB tax. The council has approved new taxes that generated over $300M in 2021 and 2022 and yet its still not enough for them. According to Sawant we aren't even funding basic services and of course TS is here to carry her water and amplify the noise.

TL:DR This is not a revenue problem, its a spending and waste problem driven by the idealogues voters put on the council. There is no amount of money that will even satiate Sawant and the other progressives and as long as any business (especially Amazon) is making any profits they will always be avoiding paying their "fair share".

As for the threats of a progressive takeover based on this I really do look forward to the elections next year. Herbold is a complete coward as she demonstrated by abstaining and if she runs (which I don't think she will) she'll be lucky to get out of the primary. A race between a progressive and a moderate in West Seattle would likely shift that seat to the right.

You're probably stuck with Morales/Sawant in D2 and D3 but Peterson and Juarez will cake walk to victory in D4/D5 which really leaves 6 and 7. D6 now has half of Magnolia in it and they are pretty pissed off so I'd say that will lean more conservative and I really don't see the other half of Magnolia, Belltown and Queen Ann shifting massively to the left so my best guess is you end up with a 6-3 council that leans a bit more moderate further alienating Sawant and her friends here at TS.

Btw why is most of the council still calling in on Zoom for these meetings. Only two of them were on the dais. They are public servants and they need to get the butts back on the dais in front of the public in 2023.

Sawant failed to build the coalition necessary to advance her goals? How surprising.

I honestly don't understand her appeal. She simply can't deliver anything beyond political grandstanding. Maybe that's enough for some people?

I'm certainly glad to see Krazy Komrade Kshama, the Broadway Bolshevik, having pretty much milked the BLM craze of 2020 for all she could, is now once again being relegated to the role of 'The-Crazy-Aunt-In-The-Attic'. The Progressives on the Silly Clowncil are reading the handwriting on the wall, and are desperately trying to tack enough toward the center to survive next year's primaries. It's kind of like how the help picks up on the quality of their work right before the holidays in hope of a nicer bonus. Hopefully the voters will see through it.

D1's Herbold is a spineless jellyblob who can be easily picked out on the Clowncil bc she's the one who's constantly wetting her finger and sticking it in the air to see which way the winds are blowing. Hopefully D1 will come up with a better challenger next year (better than the cop with the checkered past and the attorney who moolighted as a trivia night host!)

@3 the council muttered very briefly under their breath about making some cuts to a bloated department, SPD, and everyone freaked the fark out and shat their pants.

@9 Feel free to cite your resources that the SPD budget is bloated. Everything I've seen seems to say they are woefully understaffed and while not talked about so is the SFD. The council did go ahead and permanently abrogate the funding for the 80 SPD heads in future years so now the SPD will need to get new funding authorized if/when they get to the point where they can hire those officers back. That pretty much amounts to an $11M cut which sounds like defunding to me.

Raise taxes? Bullshit! If the City can find $1.37 million to send 37 BIPOC 'leaders' on vacations and 'sabbaticals', think how much money they can 'find' for important stuff if they just try.

@6, "the idealogues voters put on the council. " Notice that? The voters put them on the Council. If you are going to argue against that, who do you want to put in the place of voters?

I’m always surprised Hannah doesn’t have illustrations to back up her column that she colors with crayons.

More like Vision Nero not Vision Zero, am I right?

@14: There was no implication anyone other than Seattle’s voters can or should fix the dysfunctional mess which is Seattle’s current City Council. Indeed, in last year’s elections, voters took the radical step of electing a Republican to City-wide office.

Voters are not entirely to blame, however; in 2019, we voters of District 1 narrowly re-elected CM Herbold, after she promised to fund SPD properly. We were thus not really prepared for her eagerly joining the Defunderpants Gnomes the very next Summer. But voters in District 1 get to correct that problem next year.

The SPD is a racist, classist institution Which brutalizes the people on the bottom and fights for the corporations whenever there is a strike for better living conditions.. they are bloated. We need services not more brutality.

12 Cry us a river. You are yesterday not the future.

It's time to primary Lewis and Strauss, who care more about big business than working people and the poor!