Good Luck Picking Up the Working Class Vote Next Year, Everybody 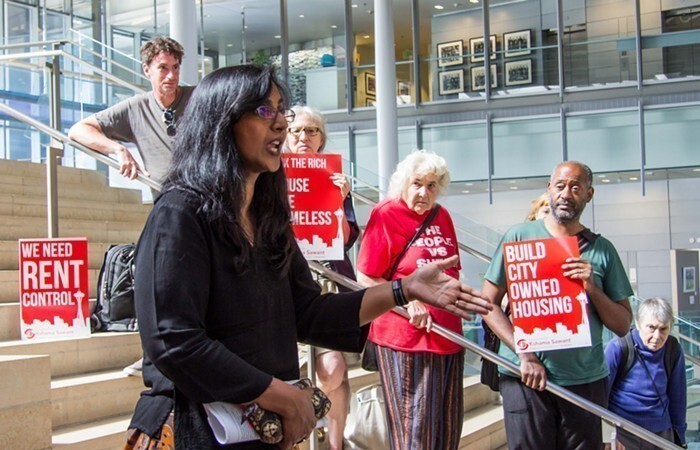 After turning up their noses at Council Member Kshama Sawant’s proposal to tax corporations to fill the City’s budget hole, on Tuesday the Seattle City Council easily passed three regressive fee increases that would suck millions from everyday Seattleites during an ongoing cost-of-living crisis. Sawant said the votes speak to council Democrats prioritizing the wealthy over the working class.

But some council members could face more than public jabs from Sawant. After all, choosing regressive revenue over progressive revenue bucks the labor power and the anti-corporate sentiment that carried some of these milquetoast candidates through the 2019 election.

Before the vote to pass the budget, Sawant requested an individual vote on the three fee increases, which she said amounted to a tax on the working class. Every council member approved the fee increases except for her.

In total, central staff projected the increases would raise $7.8 million to balance the approved budget package. Though that amount paled in comparison to her proposal to make a small increase to the “JumpStart” payroll tax on business, which would have raised $140 million, she argued that a Starbucks barista will feel the impact of the fee increases much more strongly than Howard Schultz would feel it in his profit margins as a billionaire CEO.

To be fair, the council had already built the budget on top of these regressive revenue streams, so their decision to maintain their positions came as no great shock, especially after they rejected an opportunity to change course last week.

“Council members use words like ‘sense of urgency,’ ‘honesty,’ ‘healing’ and ‘care.’ There is not much ‘urgency’ or ‘care’ when the majority of our city's working people will be forced to continue shouldering massive problems because their elected officials are not going to fight for them and would rather tacitly or openly protect the wealth of the few at the top,” Sawant said.

Council Member Teresa Mosqueda, one of two council members who sided with Sawant in the earlier progressive revenue debate, was the only one to defend her vote for the fees in the meeting.

“I do not want to send a message that I am wanting additional regressive revenue. I would prefer progressive revenue–I voted for it. However, this is one amendment that we adopted in our balancing package as suggested by the council members to ensure that there was additional funding needed for transportation-related improvements,” Mosqueda said, specifically referring to a fee increase for several Parks and Recreation programs.

No one else defended his or her choice in the meeting, but some members may have to answer for it if they seek re-election.

So Much for Labor Candidates

The city’s progressive labor power–including UFCW 3000, Unite Here! Local 8, and SEIU 775–carried many of the council members across the finish line in the 2019 election. Amazon’s attempts to buy the council that year saw such strong anti-corporate backlash that some candidates drew support simply because they faced an Amazon-backed opponent.

As the 2023 election looms, it may be harder to convince voters that council members who voted against taxing Amazon but for taxing the working class are really on their side. It would seem Council Members Andrew Lewis and Dan Strauss, newcomers who especially benefited from labor PACs, did not vote differently on the taxes than Council Member Alex Pedersen, the lone Amazon candidate elected in 2019.

In an email to the Stranger, Strauss said he’s committed to using progressive revenue sources. Though his votes clearly communicate a preference for regressive revenue this budget year, he said he’s “looking forward to seeing what the Seattle Revenue Stabilization Workgroup recommends next year.”

His excuse wouldn’t fly with Mosqueda, the chair of that workgroup, who said she did not want council members to wait on those recommendations instead of acting with urgency to generate more progressive revenue, which is how she voted.

Strauss has let task forces slow progress before, at one time acting as though he had to wait on a slow, allegedly corrupt task force before reforming the design review process to speed up the production of affordable housing. In partnership with Strauss and Mosqueda, the Mayor recently proposed a bill to exempt some affordable housing from the long, nearly pointless process.

Higher Fees for You

Regardless of how these votes impact Lewis’s and Strauss’s street-cred with labor and progressives, everyday people have some fee increases to look forward to. Get hype!

First, the council passed an increase to the cost of two-year residential parking zone permits from $65 to $95. The cost for guest permits will rise from $30 to $95. Language in the legislation acknowledges this change “may be perceived as an increase in cost of living or doing business in Seattle,” but the legislation would not raise fees for low-income people who are eligible for $10 permits.

The fee increase will raise $800,000 per year and pay for two full-time employees to improve permit enforcement and increase education about low-income permit options, according to the bill summary.

By law, a fee must pay for a related service, unlike a tax like JumpStart, which skims payrolls to pay for housing. However, the fee revenue all goes into the same bank account, so in practice fee revenue may spill into other things, according to a council staffer.

Lastly, the council also increased the vehicle license fee (VLF) from $40 to $50. Central staff projects that the increase will raise $1.96 million in 2023 after it starts in July, and then $4 million in 2024. This will pay for pedestrian safety and bike lane improvements.

The bill summary acknowledges that the VLF is “not a progressive funding source” because it’s a flat fee, and so “low-income households will pay a larger share of their income” than higher-income households.