Why I Gave Up Booze in Favor of Weed

It Helps with My Anxiety, It Doesn't Give Me Hangovers, and Are You Aware of What It Does to Sex? 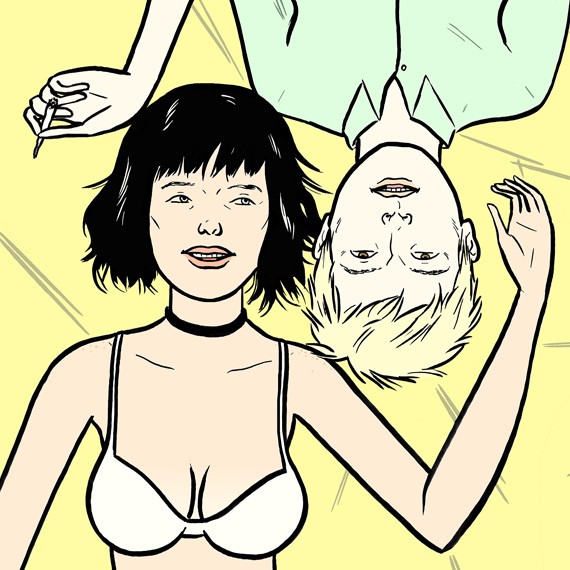 The cure for my pot-phobia came in the form of a girlfriend, who instilled in me the ability to curse in Ukrainian and make a poached egg. Mike Force

For a tiny person, I can really drink. I've drunk large men under the table multiple times, no problem. It's not something I set out to do—I'm just not a one- or two-drink person. I like to get hammered. My grandpa did, too. I wouldn't have been able to recognize him without a glass of brown liquor on the rocks. He was a psychiatrist, and after downing a fifth of brandy every night, he got up at 6 a.m. to see patients. He lived to 86. Legend has it, he was immune to hangovers.

I, however, am not. I get them bad. I've hallucinated from hangovers—I remember walking past a purely imaginary man in a trash can one morning, so fried from drinking I thought nothing of it. I don't puke, I don't have headaches, I simply lose my mind. I'm overwhelmed with anxiety. I get hangovers like Krusty the Clown on The Simpsons when he sees a poster of himself on Bart's wall and thinks it's a mirror: "Hang on, kid, I've got a tack in my head."

Many members of my family, myself included, have generalized anxiety disorder, meaning basically we're scared shitless every minute of the day. People sometimes say things like "Why don't you try yoga?" These well-meaning people do not know what they're talking about. I do every nonchemical thing possible for my anxiety—an hour of exercise a day, therapy every two weeks. It's not an emotional problem, though; it's the wiring in my brain. It fascinates me that many people don't seem to realize there is as much structural variation in human brains as human bodies. For me, and several others who share my genes, it's like some knob is cranked up too high. Everyday life is a flood, equal parts staggering beauty and horror. Makes you want a brandy or five, extra ice.

I'm happy to say I most often drink because it's fun, but I'm definitely an anxious person and booze has always helped me there. At one point, I went to a doctor because I thought I had some kind of abdominal cancer, which turned out to be stomach cramps from stress. I was prescribed Xanax, which is glorious, but which you're not supposed to mix with booze. And according to Harvard Medical School, benzodiazepine use may raise my risk of getting Alzheimer's.

I would never have expected weed to prove the third-best remedy for my anxiety (after sex and frequent exercise). The first time I smoked weed, I was 13, and the weed was laced with something awful—or perhaps we laced it ourselves by smoking it out of a pipe made from duct tape. While my friends watched, I walked 50 feet without moving my legs and turned into a floating tongue and eyeballs. My field of vision became carpeted with Chinese dragons and sinister versions of that flying glove from Yellow Submarine. I threw up on a merry-go-round in front of a busload of elementary-school children, apparently. I was tormented by unsettling questions about perception for weeks afterward, and for some reason couldn't listen to Nine Inch Nails anymore. I resolved never to touch marijuana again.

The cure for my pot-phobia came in the form of a brilliant, beautiful girlfriend, who also instilled in me the ability to curse in Ukrainian and make a poached egg. She turned me on to marijuana and the poetry of Marina Tsvetaeva. After three hits, I was scared—I thought the heater was blowing cold air on me (the window was open) and I thought her roommate had discovered a conspiracy involving the FDA and synthetic fish oil in vitamins. I awkwardly whispered that I was way too high, and I hid in her room under blankets.

I began to hallucinate, which I realize is not a very common response to marijuana, but don't forget I used to hallucinate from hangovers. Somehow, in this particular girlfriend's company, the hallucinations were hilarious. She appeared to have muttonchops (those extra-long, walrus-style sideburns) that continuously changed color and shape like the blobs in a lava lamp. She didn't know what muttonchops were—I'm not even sure if there's a Ukrainian word specifically for muttonchops—and when I tried to explain them, I laughed uncontrollably. I tried to kiss her over and over, but as soon as I closed my eyes, I saw undulating blobs of multicolored hair and burst out laughing. You try saying "muttonchops" when you're high without laughing.

My sideburns hallucinations that night prevented me from experiencing the biggest selling point of marijuana: stoned sex. Somehow I'd heard a lot about weed's art- and food-enhancing properties, but what it does for sex was perhaps my favorite surprise ever, on par even with the Jolly Roger cake my mom made for my 6th birthday when I was obsessed with pirates.

Weed slows down time, intensifies sensation—especially pleasant sensations—and makes me, at least, hyperaware of my feelings toward the people around me. You can imagine what it did for my feelings toward someone I adore enough to risk a junior-high duct-tape-fumes flashback. Our bodies seemed completely permeable, suspended in time, and when I came, I thought it would never end. I was reminded of a Joe Wenderoth poem describing the pleasure a log feels as it burns.

She smoked exclusively spliffs, this girlfriend, and I came to associate the sight of her mixing weed and tobacco on top of a book with the end of the workday and peaceful Sunday mornings. We often smoked carefully in the shower, ashing the spliff in a film canister. The hallucinations subsided.

I can't write any better when I'm stoned than I can when I'm drunk, so weed is reserved for the times alcohol used to occupy. I am a complete lightweight—one big hit and I'm done for the evening. I like to work until at least midnight, take one hit, have the world's most relaxing shower, and then read until bedtime. My sleep is uninterrupted, and there are, of course, no hangovers.

The last time I went in for a physical, I was proud to answer all the drinking-related questions on the questionnaire. I drink maybe once a week these days, in moderation, and usually top-shelf. I was alarmed to learn I weighed only 98 pounds (my normal weight is about 110). This was especially shocking considering my possession by sandwiches. I attributed the weight loss to a mixture of working too much and the absence of beer calories. I did not refill my Xanax prescription—I don't need it now, amazingly—but I happily accepted my doctor's prescription to eat more cheese.

Comments 18
Tags: Pullout Weed Green Guide Spring 2015
The Stranger depends on your continuing support to provide articles like this one. In return, we pledge our ongoing commitment to truthful, progressive journalism and serving our community. So if you’re able, please consider a small recurring contribution. Thank you—you are appreciated!
CONTRIBUTE NOW