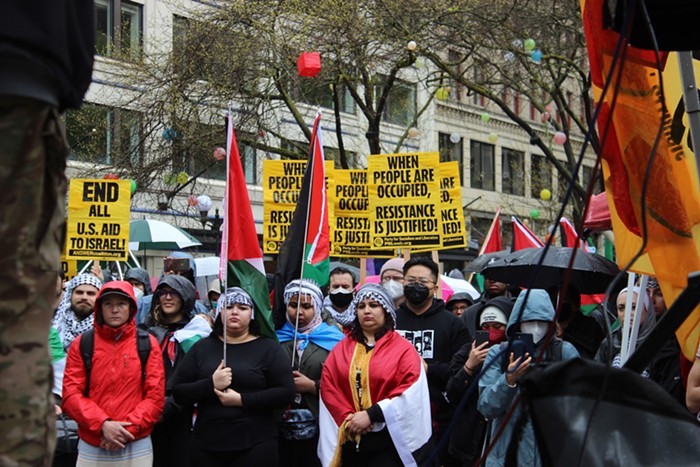 Uh? Anyone else’s bed wobble last night? After an allegedly “venting” volcano mistakenly put everyone on high-alert for natural disaster yesterday, an actual earthquake gave Washington a jolt in the wee hours of this morning. At around 1 am on Thursday, a magnitude 3.7 earthquake hit just 25 miles Northwest of Seattle. But according to Twitter, plenty of you felt it.

Strike continues: As I tweeted last night, the Seattle Education Association will strike again today after Seattle Public Schools refused to accommodate their demands at the bargaining table. You can join them at the picket at your nearest public school.

Crossing the picket line: As MLK Labor wrote in an email statement, Seattle Public Schools is still offering lunches for students who normally rely on campus meals. This is good! However, because the district decided to serve the meals inside school buildings, MLK Labor said this forces nutrition workers, families, and students to cross the picket line in order to eat. Not good!

The district had ample time to prepare for the strike and work with the City of Seattle to set up meal centers at non-school facilities, like happened in 2015. Instead, they chose to force thousands of families to cross a picket line in order to feed their child, the email read.

MLK Labor went on to praise Mayor Bruce Harrell for providing recreation drop-in centers for students, but urged the City to provide meals, too.

Teachers and cops are different, actually: Twitter’s brightest minds started to wonder if the Activist Class would be so supportive of the cops striking. Here’s how that discourse went:

Kent is back to school! After delaying the first day by over a week, the teachers union and the Kent School District finally struck a deal over their contract, The Seattle Times reported. Most Kent students have class today, while kindergarten and preschool start on Tuesday. The district said the students will make up the nine missed days throughout the year. Kent parents should watch out for an updated calendar.

#NoTechForApartheid: Today, Google and Amazon workers in Seattle, New York, and San Francisco will send a message to their companies that they do not want to be complicit in building technology that will be used to oppress Palestinians. If you want to help pressure big tech end its contracts with the Israeli government and military, meet at the Google offices downtown at 5 pm.

Next Thursday, September 8th at 5pm at the Seattle Google campus (1000 Mercer Street Google office) join us as we stand in solidarity with Amazon and Google tech workers nationally, as they fight to end their companies contract with the Zionist Israeli military. pic.twitter.com/YLi7R96e6d

Not so Smiley for abortion: This morning, Planned Parenthood Action Fund President Alexis McGill Johnson will hold a press conference to clown on Sen. Patty Murray’s pro-life challenger, Tiffany Smiley. For weeks the campaign has accused Smiley of trying to bury her record of anti-abortion sentiment. In the press conference, abortion advocates and the Murray campaign hope to warn voters that Smiley will certainly be a vote against the right to choose.

Quiet firing: So we’ve all heard of quiet quitting, which literally means setting the boundaries of your contract so you are not working for free, but HuffPost wants to warn you that bosses also have a sneaky little trick called “quiet firing.” You do your job, you do it well, and your boss still passes you up for raises, promotions, and big opportunities.

This pandemic just keeps getting worse: A Seattle-based health data firm found that people pick up their first antidepressant prescription nearly twice as often if they have long COVID compared to people diagnosed with COVID alone. Given that some people commit suicide after the disease upends their lives, some scientists fear a possible link between long COVID and suicide, Reuters reported.

The flu is no fucking joke: The flu did a number on the southern hemisphere, which is not a good sign for those north of the equator.

Get your flu shot: Your best defense is getting the vaccine. This year, you have plenty of options, including a nasal vaccine and a completely egg-free vaccine! Vegan! I think?

Las Vegas public official arrested in connection to reporter death: A swat team took Clark County Public Administrator Robert Telles into custody last night after police found his car matched the description of the person who they believe stabbed and killed reporter Jeff German. German ran a story about Telles’s alleged “'inappropriate relationship' with a subordinate staffer'' that some say cost Telles the primary in June. Deadline has the full story.

Memphis shooting: A shooter drove around Memphis last night, live streaming as he killed four seemingly random people. The cops arrested the 19-year-old suspect after he crashed his car.

Queen Elizabeth: The 96 year-old monarch is under medical supervision due to undisclosed health concerns. No clear word on how serious it is, but her family is flying in to be by her side. Here is Britain’s plan for when the Queen dies.

For those of you familiar with 2017 lesbian Youtubers and more recent TikTok drama, this one’s for you.