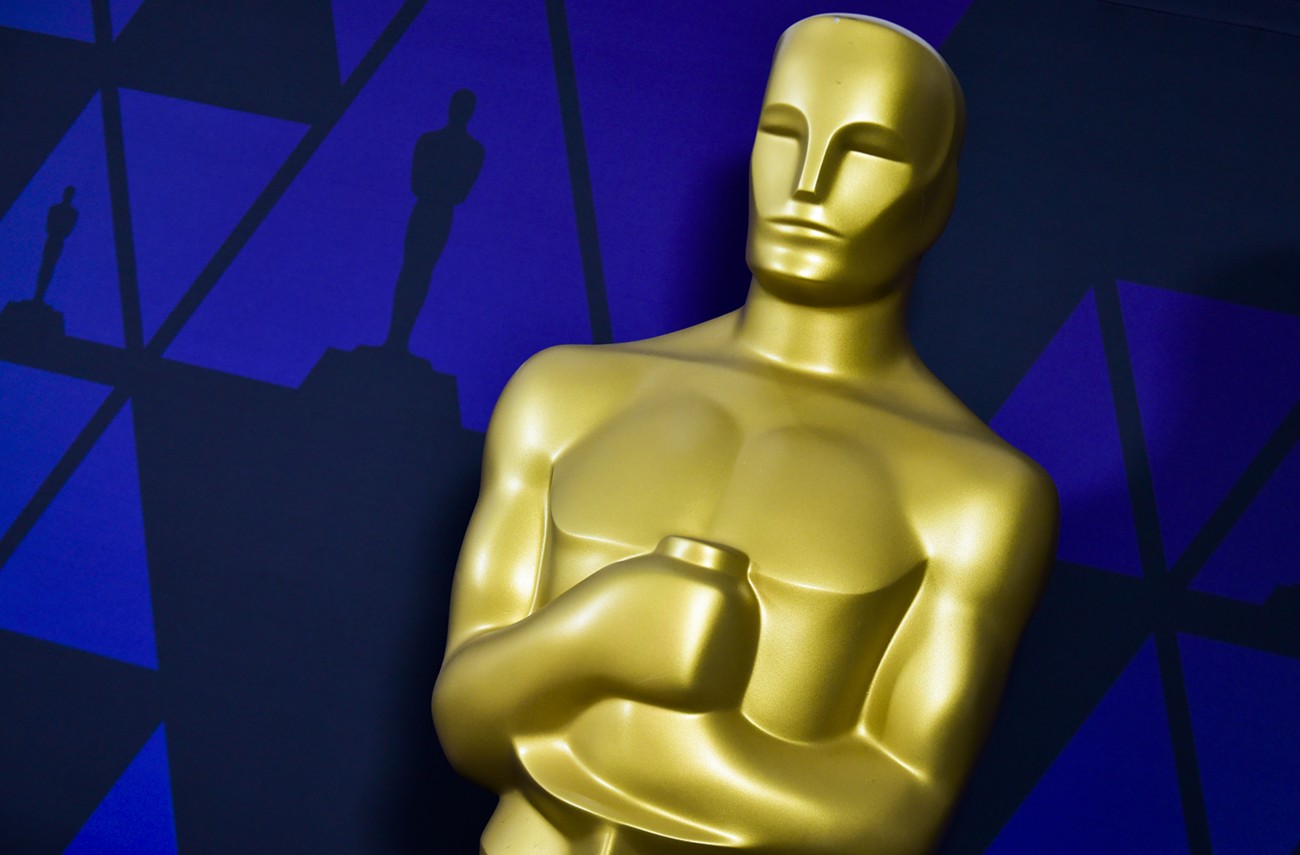 Seven killed in mass shooting in two locations in Half Moon Bay: Police have arrested 67-year-old Zhao Chunli in connection with the shootings, and investigators say they have not yet determined a motive for the killing, reports the New York Times. One of the shooting locations was determined to be a plant nursery, though authorities have not yet figured out the connection between the two sites. This comes just days after a mass shooting at a Lunar New Year celebration in Monterey Park, CA left 11 dead over the weekend. When will this particularly American affliction end?

At the hospital meeting with victims of a mass shooting when I get pulled away to be briefed about another shooting. This time in Half Moon Bay.

The gleaming $2 billion convention center is finally ready to open: After years of delays, the cavernous structure, which is called Summit, is primed for its ribbon cutting ceremony on Wednesday morning. The place will host a public open house on Friday. The convention center will feature a ground floor of shops and restaurants (though probably NOT a Taco del Mar like in the original convention center) with the top levels reserved for event attendees only. More from the Seattle Times' David Gutman:

Filling the blocks between Pine Street and Olive Way, Boren and Ninth avenues, the convention center expansion stands 14 stories high, with 10 football fields of event and meeting space totaling 573,770 square feet. There are 62 meeting rooms, two cavernous exhibit halls (one of which you can drive tractor-trailers into) and a ballroom with a 55-foot ceiling that can seat 4,000 people.

Oscar nominations are out: And there isn't anything too surprising in the line up. Everything Everywhere All at Once led the pack with 11 nominations, including Best Picture, Best Actress, Best Director, and Best Supporting Actor and Actress. The Banshees of Inisherin also did well with 9 noms, including Best Picture, Best Director, Best Actor, Best Supporting Actor and Actress. Also not surprising is the fact that no women directors were nominated in the category. Go fucking figure!

#Rare live giant squid sighting off the western coast of Japan: I would have absolutely pooped my pants if I saw this while on a dive, but luckily Yosuke Tanaka whipped out a camera instead. Seeing a giant squid alive is very rare, as these creatures live in the deep sea. But they are certainly there, just lurking in all that blackness.

Yosuke Tanaka encountered an 8-foot-long giant squid while diving with his wife off the western coast of Japan. pic.twitter.com/NtIUOcCj2R

It's Dick's Drive-In's 69th birthday (nice): And they are celebrating the best way they know how—by making all their burgers 19 cents, their original price when the fast food chain first opened, reports KIRO. Burger Day is a staggered celebration, so the Wallingford and Broadway locations are honoring the 19 cent price today. Check out the full schedule on their website.

Another prestigious restaurant closure: This time on Orcas Island. The nationally acclaimed Matia Kitchen & Bar in Eastsound has closed abruptly with little explanation. “We are opening a restaurant in a bigger and better space with the same staff and same concept,” owner Drew Downing told the Seattle Times.

Deeply upsetting news out of Memphis: Five cops were fired following the death of Tyre Nichols, a Black man, during a traffic stop less than 80 yards from his home, reports ABC. The Memphis police department has yet to release the body cam footage publicly, but Nichols family and their attorneys have seen it and what they describe is disturbing. "He was a human piñata for those police officers," said lawyer Antonio Romanucci at a recent press conference. "Our son ran because he was scared for his life," said Rodney Wells, Nichols's stepfather. The Nichols family is hoping for a murder charge to be issued as the body cam footage is expected to be released later this week or early next.

Argentina and Brazil are talking common currency: It's a "coordinated bid to reduce reliance on the U.S. dollar," reports CNBC. Hell yeah! It wouldn't replace the Argentine peso or the Brazilian real, but it would be used specifically for trade and transactions between the two countries with the potential to expand to other MERCOSUR members. Haters on the plan say the idea is bad because of the discrepancies between the Argentine and Brazilian economy. Money is a social construct, why not shake it up a bit, I say.

A message from M&M'S. pic.twitter.com/EMucEBTd9o

Amazon is ~disrupting~ the pharmacy industry: The e-commerce behemoth launched a new prescription drug service called RxPass. Service customers will pay $5 a month to fill as many prescriptions as they'd like from a list of 50 generic medicines, including amoxicillin, naproxen, and sildenafil (Viagra *wink*), reports KING 5. This subscription is limited to Amazon Prime customers, so you might be better off using this other billionaire's cheaper, more comprehensive prescription service.

Seattle Public Schools bans artificial intelligence system, ChatGPT: For obvious reasons, duh. More interesting is that CHS Blawg says the AI service is "becoming part of everyday life" for the site. "Many of our stories now receive a ChatGPT edit—'Rewrite this but make it clear...and awesome'—and some of our briefs are now wholly ChatGPT generated before a human final pass and production," they write. Another potential Capitol Hill blogger put out of a job!

Pedestrian hit by light rail train on Sunday: A northbound train struck someone just north of Othello Station, reports the Seattle Times. The victim sustained serious injuries but could speak before being moved to a hospital. Mike Lindblom notes that rail safety officers usually "conduct a multiweek investigation ... to determine the factors and whether the crash was preventable."

And in South Lake Union: A cop car struck and seriously injured a pedestrian last night, reports KOMO. CPR was performed on the 23-year-old woman before she was transported to Harborview. Authorities say Seattle Police Department's traffic collision investigation squad (what a name) is looking into the matter.

If things have been a little off for you lately, maybe this is why: A new study came out suggesting that Earth's inner core of solid iron may have paused and then reversed its rotation between 2009 and 2020, reports The Hill. Scientists say this is nothing to worry about, but I'm blaming every bad thing that happens to me on it from here on.

Let's end on some good news: The days are getting longer. I truly cannot wait for summer!

5 pm sunsets are less than 72 hours away. 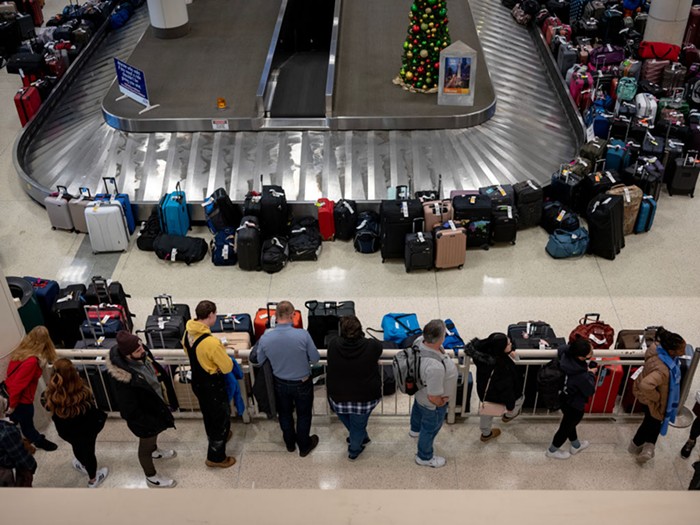 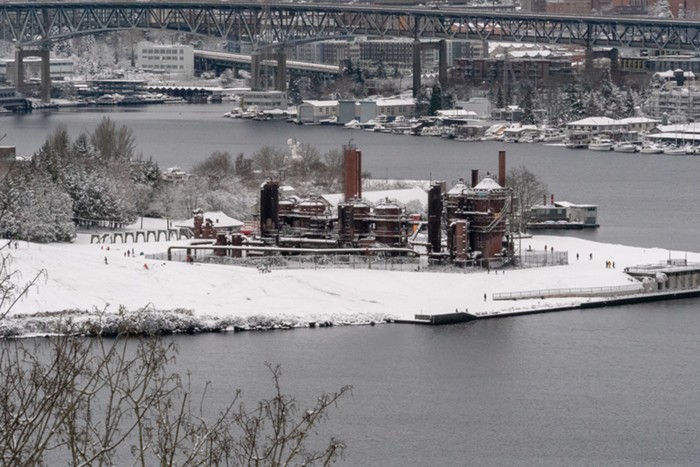