I know Will reported on this in the AM, but Biden made it offish this morning. If you make at or under $125,000, then consider $10,000 of your stupid student loans gone. And if you got a Pell Grant, then say "ciao" to $10,000 more in debt. He also extended the moratorium one final time to December 31. This order doesn't go nearly as far as necessary, but it will certainly help millions of borrowers get a handle on this predatory form of debt. The fight continues.

Obviously the topline $10k-$20k forgiveness is going to get the headlines, but this income-based repayment plan rule will have a big impact for low and middle-income borrowers (especially straight out of college) pic.twitter.com/fYDH1ICTgj

Speaking of righting wrongs: Local pizza chain Zeeks is paying out $450,000 in back wages, interest, and penalties to 224 current and former delivery drivers "after allegedly failing to disclose how much of its delivery charge was paid to drivers," reports Heidi Groover at the Seattle Times. If this news is giving you deja vu, you're not wrong. The same damn thing happened in 2019, when Zeeks had to give back $285,000 to 257 drivers. Some people never learn!

Museum of Museums gets a new director: Seattle artist Mary Anne Carter is stepping up as director at the buzzy arts space on First Hill. You might recognize her from her poetic broadsides, or her "unpredictable, faggy, experimental, hilarious" gallery Party Hat, or maybe her wigged out Message to the City. In a statement, MoM founder Greg Lundgren said he'll shift to a "more supportive role," calling Carter "a formidable and powerhouse of an artist, curator, and arts organizer" who will focus on building on the community MoM has built thus far. Carter said she hopes "to continue to expand the opportunities and resources MoM provides, giving a voice to the youth, emerging, and mid-career artists not frequently represented in other Seattle museums." Welcome, Mary Anne!

What do you think is the most common thing found on PNW beaches (besides sand, duh)? Shells? Rotted crab bodies? Those weird stringy bits of seaweed that brush against you when you're underwater and you think it's a new type of squid ready to make you her appetizer? Nope! It's TRASH. A new study from UW found that plastic and needles are being burped out by the ocean onto our beaches—especially beaches with tons of seaweed and wood, as trash gets lodged in the debris, reports KOMO. The fix? Leave it better than you found it.

California will put into effect a plan that will ban the sale of gasoline-powered cars by 2035: The New York Times said the plan is "important" as California is the largest auto market in the country and several other states follow its lead when setting their own emissions standards. More from the Gray Lady:

The rule, issued by the California Air Resources Board, will require that 100 percent of all new cars sold in the state by 2035 be free of the fossil fuel emissions chiefly responsible for warming the planet, up from 12 percent today. It sets interim targets requiring that 35 percent of new passenger vehicles sold in the state by 2026 produce zero emissions. That would climb to 68 percent by 2030.

Another day, another shady closing of a unionized Starbucks store: This time, it's the one on 9999 Holman Road NW. According to the Puget Sound Business Journal, Bucky Stars's reps said they are moving the operation into the neighboring QFC to "better align with the unique relationship" the store has with the grocery store. 🤢🤢🤢 The company is working on relocating the unionized baristas, but Starbucks Workers United rightfully called out the potential retaliatory nature of it all.

I can't stop thinking about this sculpture in Nevada: Michael Heizer spent 50 years sculpting the land out in the remote Nevada Valley. It's eerie.

Half a century in the making, the artist Michael Heizer’s astonishing megasculpture in a remote Nevada valley is finally opening to visitors. "I am not here to tell people what it all means. You can figure it out for yourself," he said. https://t.co/uJpLxWdKIo pic.twitter.com/h0i3miI3yP

First toll reduction in state history is coming to the Tacoma Narrows Bridge: After a unanimous vote by the Washington State Transportation Commission, the toll is coming down 75 cents starting on October 1, reports KING 5. If you cross the bridge daily and work five days a week, you're looking at a yearly saving of $200. Nothing to spit at!

It's getting hot in here: In a Nashville chicken kinda way. Yesterday, the wildly popular California-based and Drake-invested Dave's Hot Chicken franchise announced that they will open 10 locations in the Seattle area and that they are "actively looking for real estate," reports Eater. Begging them to open in the Capitol Hill area and stay open until 2 am. Take all my money!

Mario Batali pays up: The disgraced chef settled with two women—Natali Tene and Alexandra Brown—who filed lawsuits "accusing him of groping them at a bar and a restaurant in Boston," reports the New York Times. The terms of the settlement have not been disclosed.

Time for the weather: The Seattle Times introduced a new word to my vocabulary—aestophobe (someone who fears hot weather, lol). Those aestophobes are going to have to chill a little longer, as we have yet another warmish end-of-week ahead, with temperatures expected to potentially brush 90 degrees tomorrow. Things will cool down by Friday and over the weekend. Cold weather lovers, your time is nigh!

Expect warm conditions for W WA on WED & THU with highs in the 80s to low 90s in the interior. Coastal areas will be cooler. Cooler for all on FRI with highs mainly in the upper 60s & 70s. #wawx pic.twitter.com/9Fsga01xG0

Amazon nixes its telehealth program: The e-commerce company will shut down its virtual and in-home health care service, Amazon Care, by the end of this year, reports The Washington Post. Amazon initially created the services for its employees, but they expanded it to include Silicon Labs, Percor, and Hilton. Now, they are apparently shutting it down "because those customers did not see the value in the service." That's not going to stop Amazon from gobbling up other health care providers, though.

Barbie Ferreira exits Euphoria: "After four years of getting to embody the most special and enigmatic character Kat, I'm having to say a very teary-eyed goodbye," she wrote on her IG story. "I put all my care and love into her and I hope you guys feel it. Love you, Katherine Hernandez." This comes after reports of tension on the set between her and creator Sam Levinson.

The anti-gay Christians are sorry: Not for being anti-gay, but for re-staging a Hamilton production without permission, adding references to God and homosexuality. The Door church in McAllen, Texas received a cease-and-desist letter from the original Hamilton creators, telling them to knock it off. The play is bad enough already—no need to add God. "Our ministry will use this moment as a learning opportunity about protected artistic works and intellectual property," the church wrote in a statement.

Dennis Rodman isn't going to Russia to save Britney Griner after all: Apparently, the State Department wasn't thrilled with the idea.

For your listening pleasure: Pelada's "Corale." 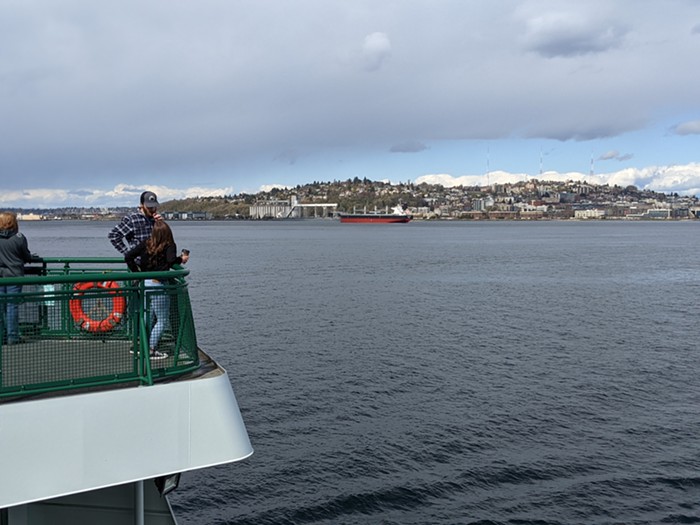