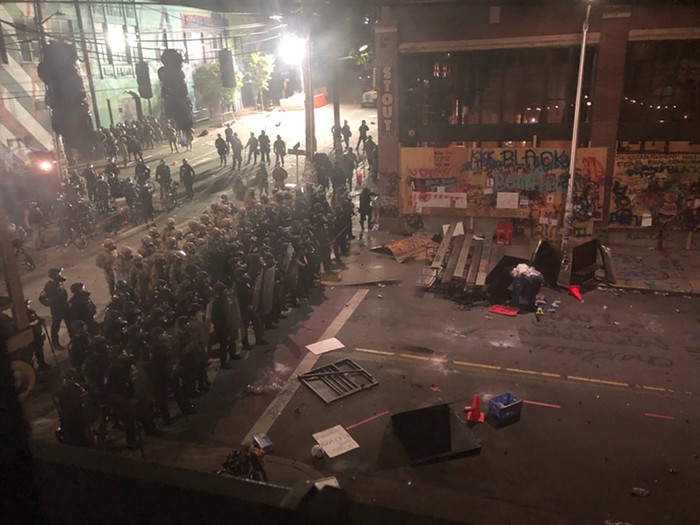 One of tonight's standoffs. RS

As the protests against police brutality on Capitol Hill entered their tenth day, the Seattle Police Department issued a dispersal order as cops threw tear gas canisters, blast balls, and pepper spray grenades at the crowd, which had moved the frontline barrier closer to 12th Ave than it had been in the previous week of demonstrations.

A prolonged and intense confrontation followed, with the police pushing protesters west down Pine and south down 11th Ave, where a gunman had shot a protester hours before.

Some protesters batted away projectiles with umbrellas, tossed traffic cones, shined laser pointers, and threw bottles and fireworks at police as they fell back. Others stood with their hands raised, bright lights shining in their faces. At one point, a gas can or blast ball hit an improvised barrier on 11th, which caught fire and sent massive clouds of smoke into the intersection. Officers and the National Guard pressed through and set up a perimeter, supported by an armored truck.

Seattle City Council Member Kshama Sawant, who represents the district, was on the front lines during the dispersal. She claimed the police "maced and gassed" her "with hundreds [of] others...with no provocation."

Cops and the guard continued to hold their lines on Pine and 11th. Protesters, who'd diminished in number to a few dozen on either side of the lines by around 1:00 a.m. chanted, "Every day! Every day!" The Marshall Law Band played live on 11th Ave for large stretches of the conflict, if not the whole time. At least one fire started near Poquito's on Pike St. and 10th Ave.

Our small, mighty, and local team is working hard to bring you coverage from Seattle's ongoing protests and policy discussions in response to the killing of George Floyd. If you are able, please consider supporting our work.