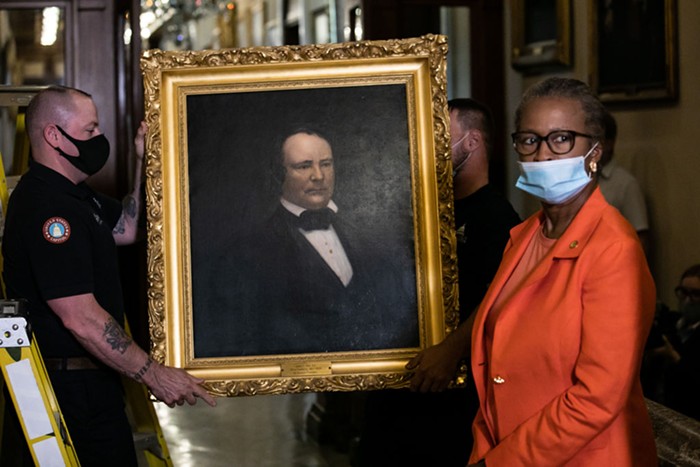 See ya, James Orr. Photo by Graeme Jennings-Pool/Getty Images
Biden has already said he will pick a woman as his Vice President: But which woman? And when will he pick? Amy Klobuchar, once a frontrunner for VP, has slid into the background because of her relationship with police in Hennepin County. Stacey Abrams recently suggested she hadn't even been contacted by Biden's search team. Val Demings and Keisha Lance Bottoms have been spiking in the VP race as uprisings around police reform continue around the country (Demings was a police chief and Bottoms is the mayor of Atlanta; they are both Black). The New York Times breaks down the candidates who are being considered. Let's have a little poll at the bottom of this PM.

A few weeks ago, they were helping gas protesters: Now look at them!

The relationship between apartment-dwelling and tent-dwelling CHOP residents remains a work-in-progress: Yesterday, the residents of 12th Ave Arts released a statement of support for the demonstrators at CHOP, but noted that they want to work with organizers to:

Some residents from the Packard building right in the center of CHOP are also concerned: "We are thankful that the violent occupation of our street by police has ended, but we have legitimate concerns about safety and security as permanent residents within the occupied zone," reads a statement published on Capitol Hill Seattle blog, "especially given that organizers’ demands have not been met and resolution isn’t within sight."

Some other residents are just pissed they can't get Amazon packages: However, as GeekWire notes, "One option for customers is to send packages to a nearby Amazon Locker; there are about a dozen or so within a 1-mile radius from CHOP." 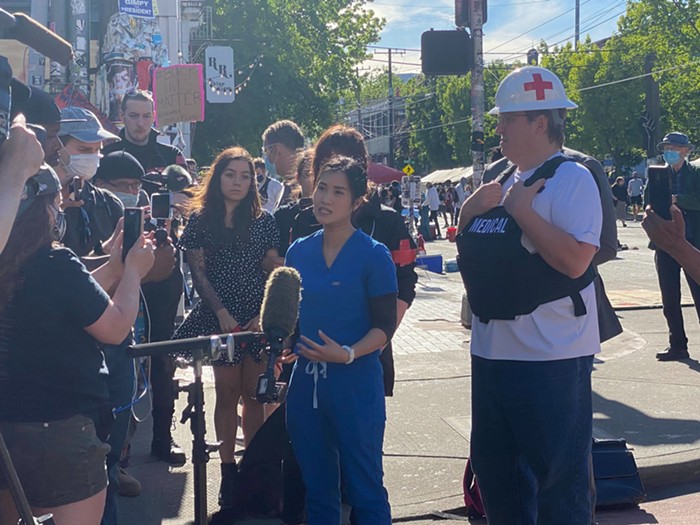 Volunteer medic and Registered Nurse Kim Dang talks about treating Aubreanna Inda, who is believed to have nearly died after being struck by a flash-bang grenade thrown by SPD officers. CB
Tonight at the CHOP: A group of medics held a press conference on treating Aubreanna Inda, a demonstrator who "died three times" after being hit with a flash-bang grenade thrown at her chest by SPD on June 8. Inda suffered multiple incidents of cardiac arrest as medics continued to lose her pulse.

Volunteer medics are now claiming that they were targeted by SPD officers with flash-bangs as they were treating Inda. The medics, which include ICU Nurse Danielle Meehan and Registered Nurse Kim Dang, say they were clearly labeled with red crosses while providing care.

The team had to make a stretcher for Inda and flee from SPD while providing treatment: Many volunteer medics are claiming this incident was a part of "a wider pattern of SPD intentionally targeting medics" with "rubber coated bullets, pepper spray, and other uses of force" as they were providing care to demonstrators, according to a press release. The medics have filed a complaint with the Office of Police Accountability. You can see full video of today's press conference via Converge Media here. I captured Inda getting hit here.

Tomorrow at the CHOP: A Juneteenth "Blackout." Breakfast and a flower crown making will be at 9 am.

For all those wondering, this is my son Nestor. We share no blood but he is my life. He came from Cuba (legally, of course) six years ago and lives with me in Florida.

I am so proud of him and raising him has been the best, most rewarding thing I’ve done in my life. pic.twitter.com/JB96wzOzYU
— Matt Gaetz (@mattgaetz) June 18, 2020

These were closeted gay men & their BFs were adults. And these gay men were closeted because being openly gay was so risky that it felt impossible. And out gay men couldn't adopt anyway. Now that out gay men can get married, there's no reason for a gay man to adopt his adult BF.
— Dan Savage (@fakedansavage) June 18, 2020

The Woodland Park Zoo will reopen July 1: The zoo sent out a press release this morning announcing the reopening. Face coverings will be required for all visitors, unless they're under 2 or medically unable to wear one. Visitors will have to purchase tickets in advance and will receive an entrance time.

Racists are pissed: House Speaker Nancy Pelosi announced today that the portraits of four former House speakers who served in the Confederacy will be removed from the Capitol in honor of Juneteenth this Friday. More from Roll Call:

The four speakers whose portraits are coming down include Robert Hunter of Virginia, Howell Cobb of Georgia, James Orr of South Carolina and Charles Crisp of Georgia. Hunter, Cobb and Orr all served as speaker before the Civil War and the secession of the Confederate States of America. Crisp served as speaker years after the war in the 1890s.

“We didn’t know about this until we were taking inventory of the statues and the curator told us that there were four paintings of speakers in the Capitol of the United States, four speakers who had served in the Confederacy,” Pelosi said Thursday at her weekly news briefing.

Speaking of Juneteenth: Trump thinks he deserves credit for making Juneteenth "very famous." In an interview with the Wall Street Journal the president said: "I did something good: I made Juneteenth very famous. It’s actually an important event, an important time. But nobody had ever heard of it."

Juneteenth is one of the oldest celebrations in the United States: Read more from the Washington Post about the holiday commemorating the end of slavery here.

The Black Beethoven debate is back: In 2015, The Concordion published an article titled "Beethoven may have been African American," suggesting that Beethovan was the son of a white German man and a Moorish woman. There are some claims that Beethoven was pressured "to wear white powder on his face to hide his ethnic origin when out in public." Randomly, this debate erupted again on Twitter this week, birthing a new era of Black Beethoven content. Enjoy:

And now... for our poll. Choose wisely!

From the Backseat with Death Cab for Cutie