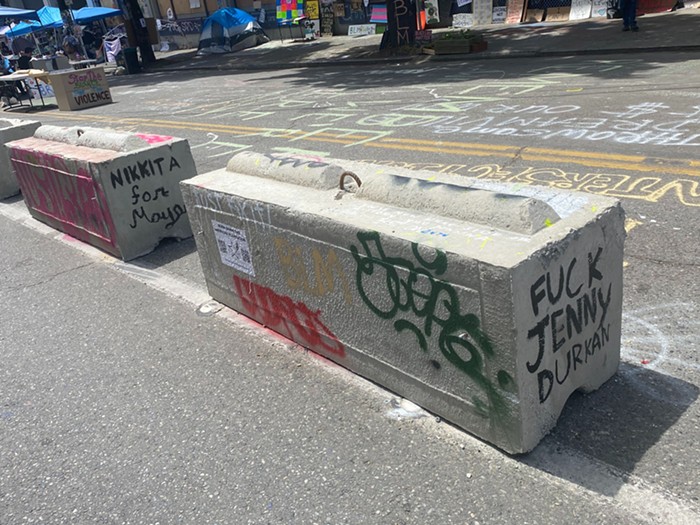 Demand 50%, get 5%: Mayor Jenny Durkan has proposed cutting the budget for the Seattle Police Department by $20 million in the last six months of this year. That $20 million cut represents about 5% of SPD's 2020 budget, per the Seattle Times' David Gutman. ("The mayor proposes slashing about 5% of the Seattle Police budget this year and a hiring freeze on new officers next year until a new plan is developed 'reflecting community priorities for public safety.'")

The announcement was made during a presentation (slide below) to the Seattle City Council today: Many demonstrators have asked for the SPD to be defunded by 50%. While Durkan is only proposing a 5% cut, Gutman notes that "Durkan has also asked the police department to prepare models of what 20%, 30% and 50% budget cuts would look like." Crosscut's David Kroman has more (with no paywall) here. 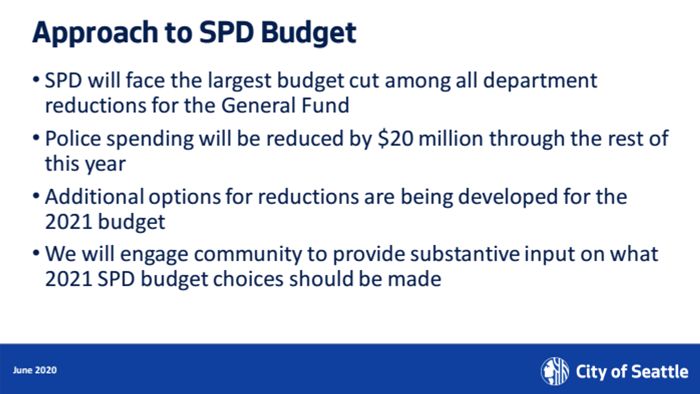 No one at CHOP is cheering.

Something to note in Kroman's reporting: "Durkan said she wants to pause construction on a downtown streetcar that would connect the city’s two existing lines."

Kentucky, New York, and Virginia are holding primaries today: The big races to watch are Democrat Amy McGrath vs. Democratic Rep. Charles Booker for Mitch McConnell's Senate seat in Kentucky. Democratic leadership overwhelmingly prefers McGrath, but her performance has been shaky. The other race to watch is the AOC-like Jamaal Bowman vs. longtime New York Rep. Eliot Engel in the Bronx. Here's Bowman:

Bringing the movement to the polls with my future Congressman ✊🏿🗳️ pic.twitter.com/6NpqUiQF6p
— Sochie Nnaemeka (@sochiesays) June 23, 2020

When will we know the results from these races? "The Associated Press is expecting a large number of absentee votes in New York and Kentucky, which will delay the tabulation of full results until at least June 30," writes the New York Times. Catch their live election updates here.

So how is today going? Uhhh...

Voters are being locked out in Kentucky.
If you’re in line don’t go anywhere. https://t.co/NeRNwuPjnw
— Randy Bryce (@IronStache) June 23, 2020

Kentucky has ONE polling place for 616,000 voters.

Mitch McConnell has allowed the bill to restore the Voting Rights Act to sit on his desk for months to reap the benefits.

THIS IS CLEAR VOTER SUPPRESSION.

The Frye Art Museum will furlough its staff this summer: Not a huge surprise, but the announcement came today. Museums aren't allowed to open until Phase 3, which could take a while... Click Jasmyne's tweet for the full press release:

When will King County enter Phase 3? It might take a bit. Phase 3 will allow restaurants and taverns to open to 75% capacity, theaters to operate at 50% capacity, and libraries and museums to reopen, among other things. (Nightclubs and large events are not allowed until Phase 4.) But experts believe we'll be in Phase 2, which King County was approved to enter at the end of last week, for some time: “I suspect we’re going to be in Phase 2, or some sort of modified Phase 2, for a while because there’s limits on what we can do with physical distancing and masking," Dr. John Lynch told Crosscut's Hannah Weinberger, emphasizing our need to vastly improve contact tracing before we're ready to move on to additional phases.

I continue to be so worried about these nightclubs and queer bars that can't open until Phase 4: I understand the delay, but Washington state has always seemed anti-nightlife to me. COVID is going to really kill it. Will we even be able to hit Phase 4 before the "second wave"? Happy Pride!

Barricades at CHOP come and go: The demonstrators have been recentering around the East Precinct and away from 10th and Pine, where many of the recent shootings have occurred. But there's little agreement over how to structure the barricades:


One thing is consistent: Honey Bucket's dedication to hauling our shit.

Mask 4 mask: Starting Friday in Washington state, it will be a legal requirement to mask up in indoor public places and outside where you can't maintain six feet of social distance. Not wearing a mask is punishable by a misdemeanor. Read more on Gov. Inslee's announcement from Nathalie Graham here. A reminder:

I keep thinking about this, via Oregon gov's office pic.twitter.com/Q9KtPw47fS

It looks like Americans will continue to be barred from entering the European Union when it reopens July 1. "That prospect, which would lump American visitors in with Russians and Brazilians as unwelcome, is a stinging blow to American prestige in the world and a repudiation of President Trump’s handling of the virus in the United States," writes the New York Times. There are expected to be exceptions, like for repatriations or "essential travel."

A follow-up on Momiji: Yesterday, a person in CHOP recorded Momiji's general manager calling a Black woman the n-word and then getting into a physical fight with her and other women. The man was quickly fired by Momiji's ownership team, who posted apologies and announced their intention to donate to various BLM-related groups: 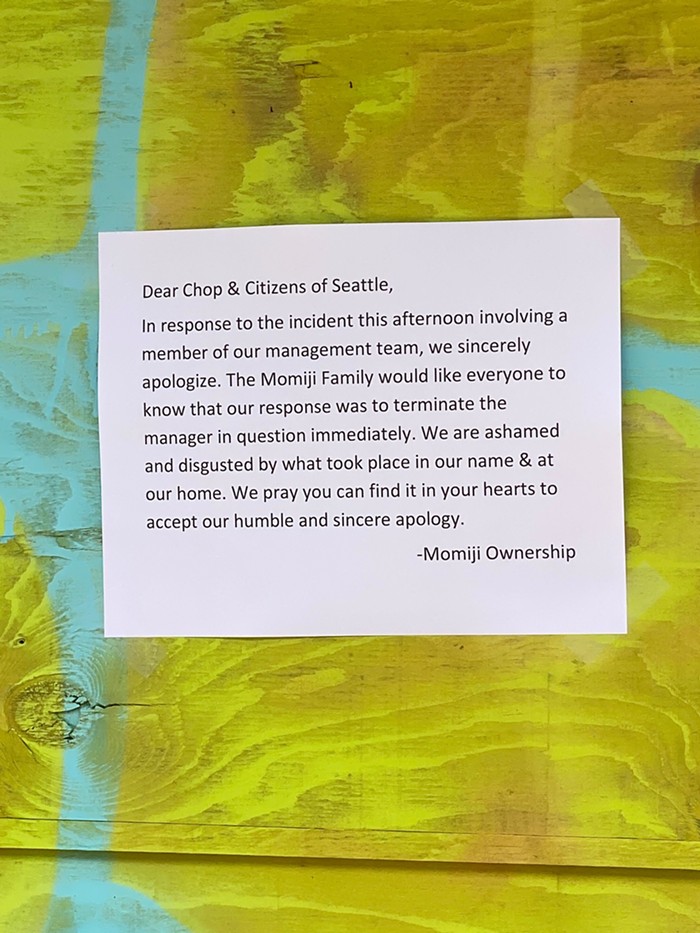 A letter posted by Momiji management outside their location in CHOP. CB

Momiji ownership is extending our sincerest apologies to the black community, specifically black women and members of CHOP, for the incident that took place earlier today. Momiji will not tolerate this type of racist malicious behavior towards any member of our community. The manager in question was terminated immediately. His partnership is no longer valid. We are trying to navigate this situation in the best ways possible. Since this afternoon, we have reached out to community leaders in CHOP, BLM and Asians for BLM in the hopes of improving the ways that we can support the community and provide a safe space for everyone. We have also donated $10,000 to black led and black-youth organizations—WA-BLOC and Creative Justice. To continue our support we will also be matching donations of up to an additional $10,000. Please email copies of receipts to mailto:info.momijiseattle@gmail.com Momiji will be providing meals to the CHOP and Black Lives Matter community members outside our establishment tomorrow evening starting at 6pm. This is an open chance for us to give back to the people, support the community and engage in open conversations about how we can do better.

The groups did not accept the donations: WA-BLOC and Creative Justice both received a $5,000 donation from Momiji, but the groups returned the donations and released a statement online. "We are calling on Momiji to use the $10,000 that was originally donated to WA-BLOC and Creative Justice to pay reparations to the Black womxn who was subjected to hate and abuse by Momiji’s former general manager," concludes the statement. "Restitution is owed to the person who was directly harmed." We're following up on this story and will update as available.

Last night, in an attempt to rescind the impacts of an anti-Black verbal attack involving the former general manager of Momiji and a Black womxn protesting at CHOP, WA-BLOC and Creative Justice received an online donation of $5,000 each from Momiji’s restaurant owner after a public statement from the owner was made announcing the donation with no prior direct communication to WA-BLOC or Creative Justice. This reactionary donation undermines the integrity and intentionality of our organization. As a result, we at WA-BLOC and Creative Justice have refunded the donation. Accepting a lump sum of funding does nothing to hold donors and businesses like this accountable. WA-BLOC and Creative Justice have no interest in upholding capitalism, the nonprofit industrial complex, or pacifying racist guilt. This lukewarm and performative philanthropy acts as a passive escape route for the wealthy class to evade accountability and avoid getting their hands dirty to help dismantle the oppressive systems that disproportionately disenfranchise the communities we serve every day. For Momiji’s ownership to cast a public facing statement about the donation that was made to our organizations without communicating with us directly beforehand or asking for consent to publicly involve our organizations in such a sensitive matter illustrates the apathetic nature of this expired gesture. We are calling on Momiji to use the $10,000 that was originally donated to WA-BLOC and Creative Justice to pay reparations to the Black womxn who was subjected to hate and abuse by Momiji’s former general manager. Restitution is owed to the person who was directly harmed.